Leaked reports of last week’s meeting between UK PM Theresa May and EU Commission president Jean Claude Juncker suggest the opening round in Brexit talks between the two sides started on very shaky ground. The British pound however has brushed aside the rumored differences and continues to trade near multi-month highs against both the USD and the EUR.

According to German newspaper Frankfurter Allgemeine Sonntagszeitung, the talks between the UK and the EU achieved little but rancor with Juncker telling May that he is leaving the meeting “10 times more sceptical than I was before.” It is claimed that Juncker said that Brexit cannot be a success and that he threatened to end trade talks if the UK refused to pay its Brexit divorce bill, estimated by the EU to be around GBP50 billion. PM May is reported to have told president Juncker that the UK does not legally need to pay the bill. The newspaper report also added that while PM May asked for the talks to remain confidential, Juncker said that was not possible and that “all documents must be published.”

According to a Reuters report the PM’s spokesman on Tuesday told reporters that the PM is clear that she will make a success of the talks and “will secure a deal that works in the best interest of Britain and the European Union.” He added that the UK will approach the talks in a constructive manner and with “huge amounts of goodwill.”

The British Pound is taking these early sharp differences in its stride and continues its recent rally, heading back towards recently made multi-month highs. GBP also received a boost from recently released UK economic data. The latest Markit manufacturing PMI data for April rose to a three-year high of 57.3, beating last month’s reading of 54.2 and market expectations of 54.0.

According to Howard Archer at data provider IHSMarkit,

“This is a serious upward surprise – even allowing for the fact that it is the manufacturing sector that has recently been showing the most life in the UK economy, helped by a competitive pound and decent global growth. ...the April manufacturing PMI not only showed marked improvement in output, but a sharp pick-up in domestic orders led by the investment and intermediate goods sectors.”

And the latest IG Client Sentiment Indicatorsalso point to further gains for the British Pound. 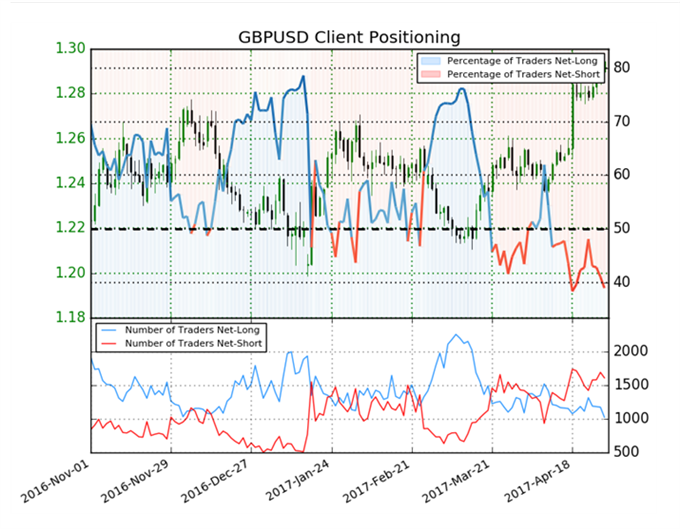 We typically take a contrarian view to crowd sentiment, and the fact traders are net-short suggests GBPUSD prices may continue to rise. Traders are further net-short than yesterday and last week, and the combination of current sentiment and recent changes gives us a stronger GBPUSD-bullish contrarian trading bias.