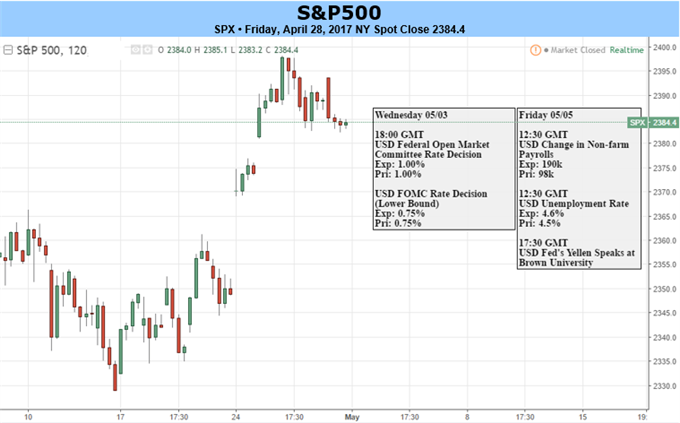 U.S. markets started off last week gapping sharply higher on the outcome of the first round of the presidential elections in France; the CAC 40 traded up over 4% on optimism of a Macron victory over Le Pen at the upcoming May 7 run-off election. Not only did the gap hold in the U.S., but the Nasdaq 100 continued notching new record highs throughout the week. The S&P 500 turned lower on Wednesday after coming just three points shy of the 2401 mark, but maintained a large chunk of the weekly gains.

Looking ahead, Monday may be relatively quiet with major financial centers in Europe closed for holiday. In terms of scheduled ‘high’ impact data events, we have Core Personal Consumption Expenditure (PCE) and ISM Manufacturing on Monday; and the big event of the week coming on Friday when the April jobs report is due out. The market will be looking for a strong rebound in NFPs (+180k estimate) after the big miss in March of only +98k. For details, see the economic calendar.

There was a minor reversal day on Wednesday from just shy of the March 1 record high, and it is still unclear if it will hold further bearish implications. The longer the market hangs out at elevated levels, though, the more likely it was only a sign of short-term exhaustion. Looking to support, not far below lies the November trend-line and April 5 high at 2378. It would require a sharp break for us to start thinking about a gap-fill from last Monday, but should the market trade beneath the gap-day low of 2369 then the likelihood will increase significantly. All-in-all, a breakout to new record highs could be in store for the as long as support levels hold. 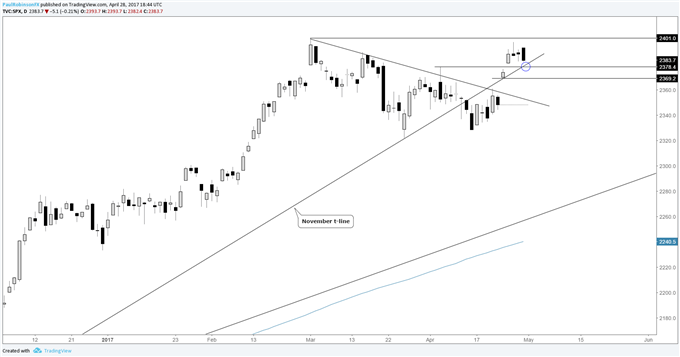 The DAX started last week off with a monster day on the back of results from the first round of the French presidential elections. The ECB met on Thursday, but provided little in the way of volatility in the absence of any changes to interest rates or any strong guidance. Looking ahead, ‘high’ impact data events the market may be focused on include German unemployment data and Euro-zone GDP on Wednesday. For a detailed list of scheduled events, see the economic calendar.

Most of Europe will be on holiday to start the week; German and French markets will be closed for Labour Day on Monday, while the UK will be off in observance of ‘Early May Bank Holiday’. How the DAX opens on Tuesday will not only depend on any meaningful news which may hit the wires between now and then, but will also likely find influence from the start of the week in Asia and the U.S.

Following last Monday’s surge, the DAX did a whole lot of nothing, trading bullishly quiet. Meaning, a market which doesn’t quickly begin retracing a large gain has an increased likelihood of making another push higher, sooner rather than later. Maintaining above the prior highs at 12375/91 is the most bullish scenario, with leniency towards testing the gap-day low of 12289. Should the market fall back into the gap, though; risk will quickly rise of seeing it fill back down to 12048. At this time, we look for the market to hold and push higher. Looking higher, resistance first arrives at last week’s high of 12486, the August 2016 top-side trend-line, and then the trend-line running over peaks since late-February. 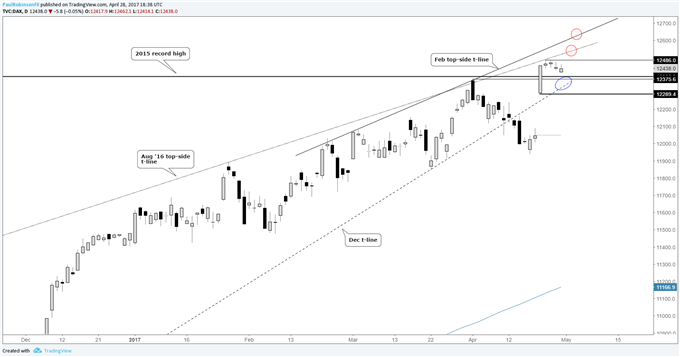 To start the week, the market will be closed in observance of ‘Early May Bank Holiday’. Once trading resumes on Tuesday it is likely participants will take cues from any significant weekend headlines, and how markets unfold in Asia and the U.S. It’s a very quiet week on the economic data front.

Last week, the footsie popped from support on the French election news, but ran aground into staunch resistance in the vicinity of 7255/300. After a couple of days of churning the market was unable to overcome the 7300 mark and turned lower to end the week. Of the major global indices we track, the FTSE has become the least buoyant of the bunch, and also the most difficult to get a handle on. It’s in a position of being caught between support by way of the rising trend-line off the June low and the beforementioned resistance zone. It could be a quiet week of bouncing around between levels before finally seeing a resolution. We’ll reside in the ‘wait-and-see’ camp until the picture becomes clearer.

For a full line-up of live events with DailyFX analysts, see the Webinar Calendar.