- Sterling sheds its gains versus the Euro.

- We should have a better sense of the extent to which UK economic growth is slowing by end of this week.

The British Pound has shed all of its gains made last week versus the Euro, after the single currency basked in the positive glow of the results of the first round of the French election. Last week EURGBP hit the December lows at the 0.8300 level after Sterling made gains as British Prime Minister Theresa May announced an early general election. 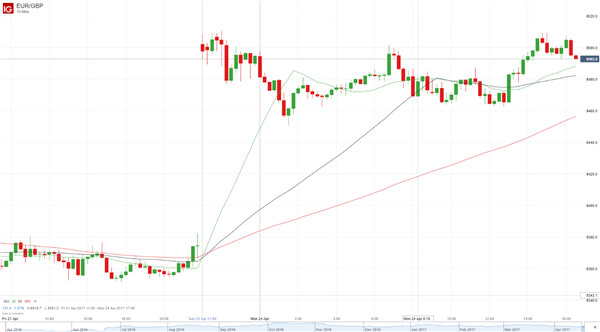 The reversal has seen the Euro push up through the 0.8500 level. Can EURGBP keep its bullish momentum? It could struggle near the 0.8570 level, where the 50-, 100- and 200-day moving averages converge. What’s more, the Euro’s rise against the Pound could remain limited by the UK election, to be held on June 8. May is calculating that she can capitalize on the dire ratings for the main opposition Labour party, consolidate her power and increase her majority in the House of Commons.

The thinking goes, in the markets at least, that she will thus be able to silence the more hardline voices within her Conservative party intent on a ‘hard Brexit’, resulting in a softening in the tone of the Brexit negotiations with the European Union, and boosting Sterling.

Indeed, the Pound has held its gains against the Dollar in Monday trading, and GBPUSD appears to be finding support around the 1.2780 level.

However, May’s government – and Sterling bulls – do have weakening data to contend with. The UK’s latest retail sales, industrial production, construction output and index of services reports have all come in below expectations.

Today, Monday, brought further evidence that higher inflation is taking the steam out of the main engine of the UK economy – consumer spending. Deloitte’s quarterly consumer confidence index dropped to -7 for the first quarter of 2017 from -6 in the last three months of 2016, a sign of softening consumer confidence.

"Since last summer's EU referendum consumer spending has held up well, but with inflation rising and nominal wage growth starting to slow, consumers are beginning to feel a squeeze on their disposable income," Deloitte economist Ian Stewart said.

Another data point, the latest CBI Industrial Trends survey, came in well below consensus estimates and suggested that UK manufacturers' investment intentions have softened again, again raising concerns about the robustness of the economy – although the survey’s forward-looking elements do indicate any weakness should not be too prolonged.

The data are not top tier, but are in any case still likely to reinforce the belief that the Bank of England will not be raising interest rates any time soon – which is negative for the Pound.

We should have a better sense of the extent to which UK economic growth is slowing by end of this week, with the release of the UK’s first-quarter GDP estimates on Friday. The EURGBP cross is also likely to be impacted by the European Central Bank’s monetary policy meeting on Thursday, and the GBPUSD cross by the US preliminary first-quarter GDP estimate, also on Friday.