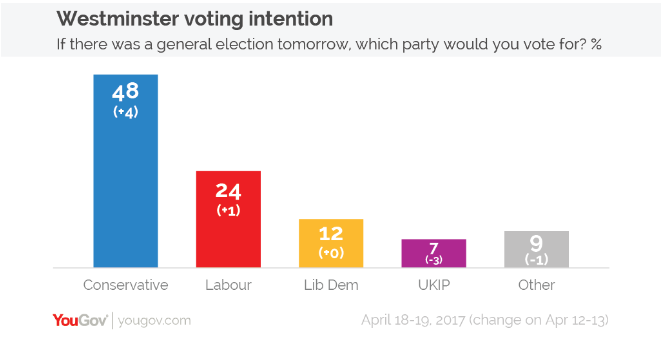 A YouGov poll for The Times newspaper has shown support for the ruling Conservative party hitting a nine- year high, as the country prepares to go to the voting booths on June 8. The poll of voting intentions, the first since UK PM May called a General Election on Tuesday, shows Conservative support up four percentage points to 48%, Labour up 1% to 24% and the Liberal Democrats steady at 12%.

When asked who would make the best Prime Minister, Theresa May polled 54% and Jeremy Corbyn 15%.

If the latest polls are correct and the ruling Conservative Party increases its lead over the opposition, PM May will head into Brexit negotiations emboldened by the knowledge that her political detractors’ powers, especially in the House of Commons, have taken a hit.

The British Pound remains well supported, post the election call, and could push further ahead against both the USD and the EUR. In the US, the recent market enthusiasm for an additional two or three interest rate hikes has waned slightly, while all eyes in Europe are on the first round of the French presidential elections, with the four main but very different candidates battling it out to make it into the final two.

And the latest IG Client Sentiment Indicatorsalso point to further gains for the British Pound.