- Snap election planned for June 8; parliament to vote on the election Wednesday.

The British Pound reversed its gains then recovered and hit fresh highs Tuesday after Prime Minister Theresa May unexpectedly announced a snap election to be held on June 8.

Speaking in Downing Street, May said her government has delivered its mandate after the Brexit referendum, saying "there can be no turning back" and the government has a plan in place for negotiations on the UK's departure from the EU.

There will be a Commons vote on the proposed election on Wednesday - May will need Parliament's backing to hold a vote before 2020.

May’s move was a surprise – but it’s understandable. Her ruling Conservative party has moved into a 21-point lead over the main Labour opposition party for the first time in nine years, according to a YouGov survey for the Times at the weekend. She thus has an opportunity to increase her majority in the House of Commons, which may boost her hand as the UK embarks on a difficult two-year negotiating period with the European Union.

Sterling went on a roller coaster ride amid the announcement. Sterling had already touched an eight-week high against the Dollar in early Tuesday trading as it took advantage of the general disappointment over the Trump trade, coupled with geopolitical concerns.

GBP/USD then dropped violently as May said she would make an announcement outside Downing Street at 11.15 BST, offering no further explanation. When she eventually announced an early election, a few minutes before 11.15, the Pound recovered back to 1.2597. By 11.40 BST it had hit another fresh high of 1.2638 and is looking to test the next resistance levels around 1.27. 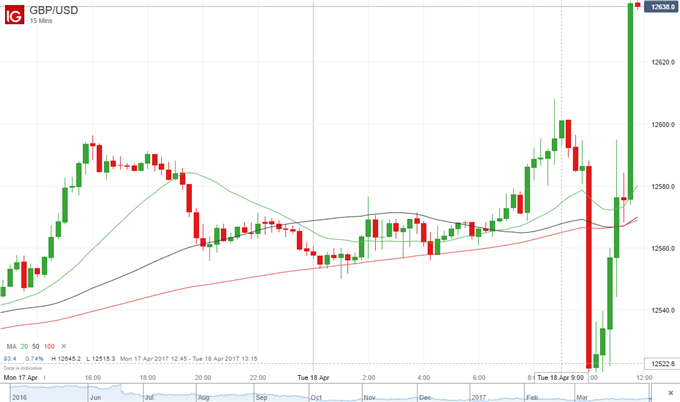 It was a similar story for the Pound verus the Euro and Yen.Before May’s surprise move, the markets had been more concerned with another election – namely the one taking place on the other side of the English Channel, with all eyes on the first round of the French election on Sunday April 23. But May’s move has clearly inspired Pound bulls.