Want access to all of our second quarter forecasts? Get them here !

In contrast to the charge the Dollar mounted through the final three-month period of 2016, the benchmark currency seemed to stall through the first quarter of 2017. While not a full tide change, the bulls were much more circumspect about their ambitions. What lies at root to this downshift is an evolving fundamental landscape which may present more problems than support for the Dollar through mid-year. The mathematics of the currency’s advance over the past years was in large part anchored to the aspects of a favorable monetary policy regime from the Federal Reserve. A move to ‘normalize’ monetary policy (hike rates) was an express contrast to the persistent dovish efforts of its global counterparts. In a world still reaching for yield wherever it may be found, the Dollar’s appeal was amplified through sentiment.

Yet, heading into the second quarter; these mechanics were starting to fall apart. Markets had priced in an exceptional hawkish advantage that is both unrealistic and prone to speculative markets moderating their view on ‘risk trends’. Furthermore, the relative advantage afforded by weakened counterparts started to close with other central banks planning withdrawal from dovish extremes and rising trade boundaries threatening to divert capital flow. The second quarter threatens to be an unpredictable – and likely volatile – period for the Greenback and broader financial system.

Though it is impossible to attribute an exact quantity, it is reasonable to ascribe a considerable portion of the Dollar’s (ICE Index) 30-plus percent advance over the past three years to the premium the Fed’s measured pace of policy tightening has afforded. That said, that remarkable drive has developed with only three 25-basis point rate hikes in the period through the close of the first quarter. That is a remarkably small, notional advantage that leverages its appeal through the stark contrast to the rest of the developed world’s policy settings. And, therein lies the trouble. While the US central bank has taken great pains to project a gradual pace, the markets have overshot with forecasts for more than just the three total hikes in 2017 that the Fed itself charted out. Below, you can see the market’s probabilities for four total hikes through the year (dark green) and even five (purple). Simply sticking to its initial pace would prove the market over-reaching on the Dollar. Cooling its projects could spur a true correction. 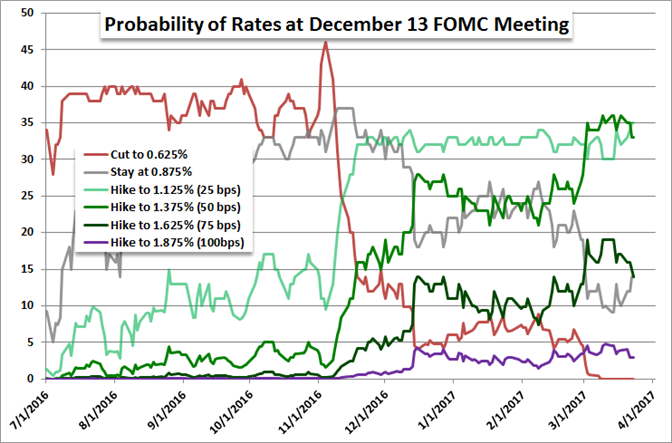 Another aspect of the Dollar’s fluid rate advantage is that other policy groups may themselves close the gap. A meager 0.75 percent-per-annum yield advantage is a tepid motivation for speculative appetite if not for the extreme accommodation from the likes of the European Central Bank (ECB) and Bank of Japan (BoJ). However, there is evidence they have already hit the limits of easing and are already plotting measures to normalize. The Japanese group’s decision to change tack from consistent QE injections at a regular pace to infusions that keep the local 10-year government bond yield at 0.0 percent is a small ‘taper’. The ECB’s plan to end its stimulus program in December has been accounted for, but suggestions in March that the policy authority discussed rate hikes before the end of the stimulus program seems to look a lot like the lead into the Fed’s own about face – but at a faster clip. 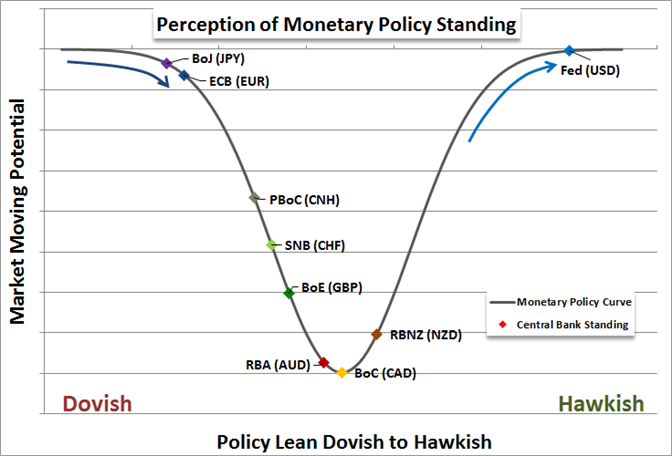 Relative monetary policy was the topic du jour over the past three to four years, but a new theme is rising to take its place in 2017: competitive trade policy. Protectionism has gained a clear foothold in the global economy with developments like the Brexit vote in the UK, the election of US President Donald Trump on an American-first campaign, and the contentious elections in the Euro-area with strong anti-EU party standings. There are very few policies that render all parties winners, and global trade is not one of them. However, the free flow of capital the world over is a very clear net benefit to the global economy. It is also confers significant advantage to the US overall as its largest participant.

The push to renegotiate or withdrawal from long-established trade relationships is very likely to draw retaliation and divert capital from flowing into the US. It is possible that the first phase of protectionist policies can bolster the Dollar as capital is repatriated or global investors account for the losses to America’s trade partners. Those gains however will eventually falter as tariffs or border taxes distort wealth and consumption to thereby pinch business health and available funds. Proposals such as tax policy reform and a $1 trillion infrastructure spending program could help to counterbalance with domestic growth, but those can prove more difficult to achieve compared to the quick erection of trade boundaries.

Hitting the Tempo of Risk Aversion that Revives the Greenback?

Historically, the US Dollar is considered one of the market’s unquestionable safe havens. With the persistent advance in speculative appetite since the Great Financial Crisis though, there has been little appetite for the currency in that role. In fact, the currency has positioned itself through its yield position such that it finds advantage in the swell in risk trends. The result is a negative correlation between the currency and volatility (considered a ‘fear’ measure) established against archetypal conventions.

The risk to the Dollar in this unusual relationship between the currency and market-favorite VIX equity volatility index (below with the 6-month rolling correlation) is the threat that speculative appetite starts to falter again after a 12-month bullish stretch on a much-larger and ambitious 8-year trend. Typically, declines in traditional ‘risky’ assets would swiftly lift the Greenback; but now it could actually sink it as the speculative funds positioned for interest rate advantage are unwound. That said, a more systemic and aggressive retreat in the broader market would escalate the need to deleverage to seeking absolute liquidity. Given that there are few assets that can match the Dollar for depth and credit quality, funds would flow in once again. So, moving forward, the USD can benefit from a ‘risk on’ or panicked view. In between those extremes, however, the currency could suffer. 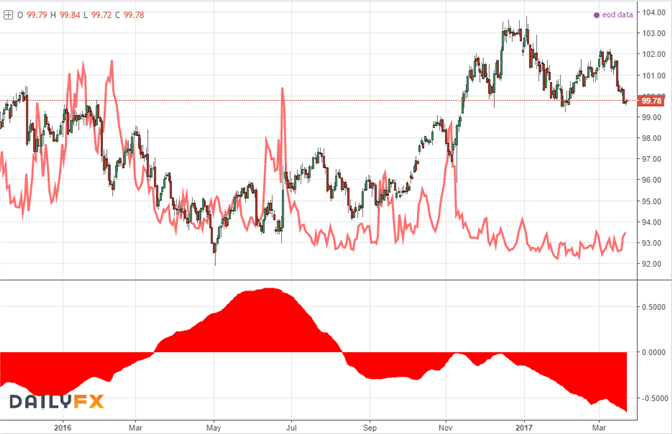 Want to read the rest of this US Dollar forecast? Get the full report here !