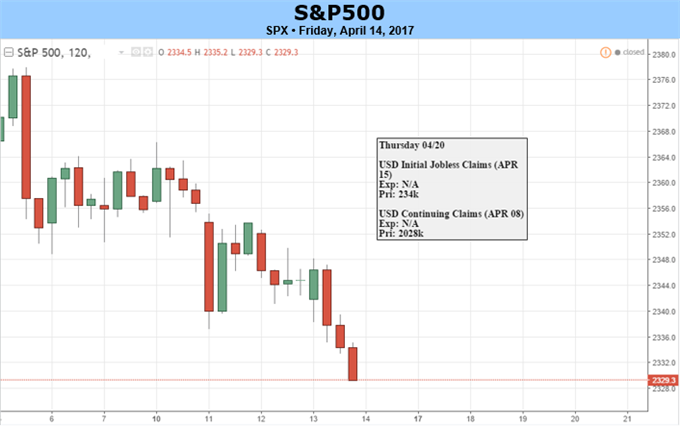 Most major global markets were cut short a day last week in observance of ‘Good Friday’ prior to Easter Sunday. In the week ahead, the economic calendar is quite light on ‘high’ impact events, with several ‘medium’ impact releases due out in the U.S. throughout the week.

U.S. markets ended last week on a negative note, closing at their worst levels of the holiday-shortened week. The S&P 500 broke the November trend-line on Wednesday after carving out a second lower high on the day the FOMC released its minutes from the March policy meeting. The next leg in this sequence of lower highs since the March record high, is for a lower low below last month’s low of 2322. The next level of support on a lower low may come in at the lower parallel around 2307. The next levels of price support comes in at 2301, and with aggressive selling we could see a move towards the 2270s. It will take some work from current levels to turn the picture positive.

All economic data set to be released next week is of the ‘low’ to ‘medium’ impact variety, for full details visit the economic calendar.

The lines of support the DAX closed around last week are the trend-line rising up from the December low and the lower parallel extending higher off the early February low. They aren’t in exact alignment, but do offer a confluence zone from which the market should bounce if it is to maintain its clean trend structure over the past few months. If support can hold (thinking is, it won’t) the DAX will need to cross over a small swing-high at 12247 before momentum can kick in back towards the prior high at 12375 and record high of 12391. However, on a drop below support lines and the 4/11 low at 12050 the market could be in trouble. The next level of support on a breakdown clocks in at the March low of 11850, then 11722, and in the event we see a big swoon there isn’t anything significant until 11480. 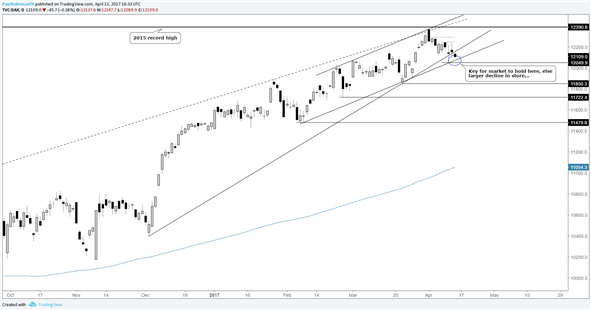 Where could stocks be headed during the rest of Q2? See what our analysts have to say in the quarterly forecast.

As is the case with other major markets, there isn’t any ‘high’ impact economic events on the calendar. For the full docket, see the economic calendar.

To end last week, the FTSE just barely held the June trend-line after breaching it on an intra-day basis. It’s an important level of support as it has kept the market propped up in recent sessions. As we were discussing on Thursday, the top-side trend-line extending across from the 2013 peak over the 2015 high to now, has been problematic on four occasions since January. Only once last month was it able to cross above, but only for a couple of days before sinking back below.

Similarly to the DAX, the footsie is on the verge of a breakdown if it can’t get into gear early in the week. Again, as we said regarding German stocks, it appears the U.S. is set to lead everything lower. If, however, the FTSE can hold and mount a rally, given problems around the 2013 top-side trend-line, we want to see a close above 7400 and last week’s two reversal bars before turning optimistic about another challenge of record highs or better. Price action running back the middle of March is carving out a head-and-shoulder(ish) pattern, with a drop below lows extending back to March acting as a trigger. A decline below 7256 would put the footsie below all three lows since the middle of last month. In the event of a breakdown, support levels in focus arrive at 7192 and 7093.