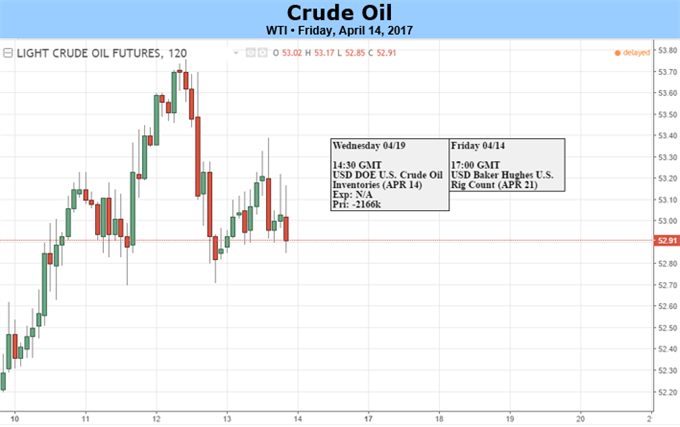 Will Oil Continue Its Rise in 2Q? See our forecast to find out what is driving market trends!

Nationwide US Oil Output moved to its highest level since January 2016 per the EIA report on Wednesday despite U.S. Crude stockpiles falling by 2.2m barrels. The fundamental tug-of-war remains in play, but it’s possible the Oil Bulls could win out as the IEA report appears supportive for the fundamental outlook. In short, they showed that despite an increase in Crude Oil inventories, the OPEC-led production cuts had put the global stockpiles “very close to balance,” and we could see stockpiles exhaust in 2Q.

Even with stockpiles close to depletion, there remains hope that OPEC could extend their production cuts, which would bring the global Oil inventories to a net draw that could boost Oil prices easily to 2017 highs. While US producers have activated 28% more rigs in 2017, and there does not appear to be any intention to pull back production, the balancing Oil market should encourage the multitude of Crude Oil price Bulls while worrying the Bears.

The rumors surrounding the OPEC production cut extension continue to be supportive. Last week, the Nigerian Oil Minister shared that there is a “lot of energy” for the 6-month OPEC extension.

The charts appear encouraging as well. There was a strong bounce off the 55-WMA at the start of the Q2 opening range low of $49.91/bbl. The opening range low for Q2 will be a solid price level of support to watch because if that level holds, the bias will remain bullish, which aligns with sentiment analysis shared below. 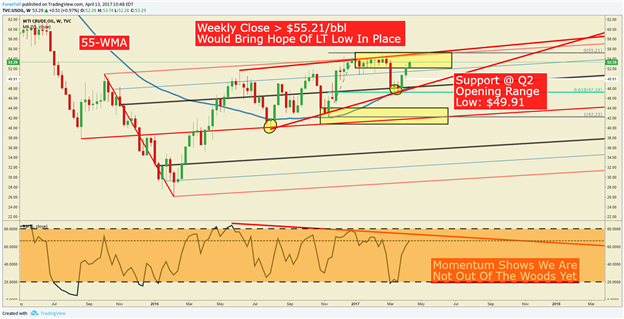 Tuesday will also be the start of the 2-day Oil & Gas Forum in Moscow with the participationof Russian Energy Minister followed by the IMF release on later that same day of their World Economic Outlook. Wednesday will provide the third GCC Petroleum Media Forum conference in Abu Dhabi, with OPEC Secretary-General Mohammad Barkindo speaking alongside the oil ministers from Saudi Arabia, Kuwait, Qatar, U.A.E., Oman, Bahrain. Traders will naturally look for hints of an OPEC extension in their talks. 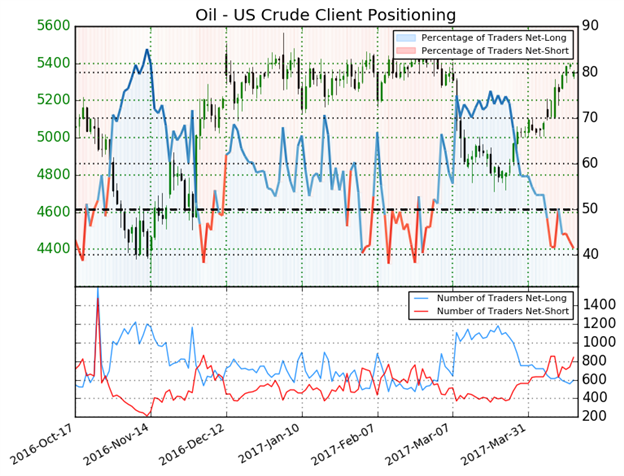 We typically take a contrarian view to crowd sentiment, and the fact traders are net-short suggests Oil - US Crude prices may continue to rise. Traders are further net-short than yesterday and last week, and the combination of current sentiment and recent changes gives us a stronger Oil - US Crude-bullish contrarian trading bias. (Emphasis Mine)