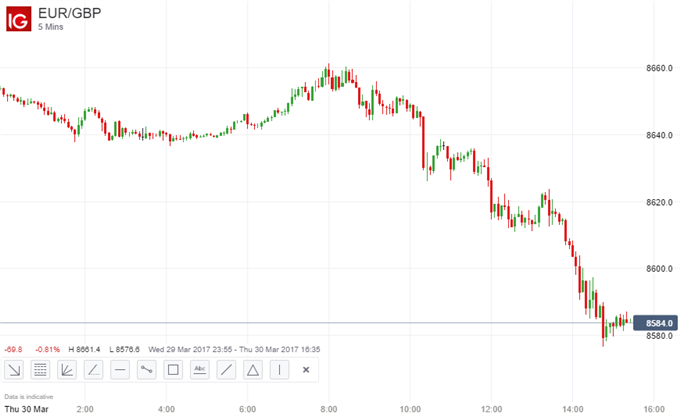 - The day after the UK formally triggered Brexit, it was the Euro not the Pound that weakened.

- However, that had more to do with weak German inflation figures than a belief that Brexit is bad for the Euro-Zone.

Given the tumble in the British Pound back in June last year, when the British people voted for Brexit, a further move down might have been expected when the UK gave formal notice of its intention to leave the EU. However, with the decision fully priced in to the markets, it was the Euro that fell against the Pound.

EUR/GBP dropped to its lowest level since March 3, almost four weeks ago, and EUR/USD was lower too. However, that was principally a reaction to German consumer price data that showed inflation at 1.6% in March, below the predicted 1.8% and down from 2.2% the month before.

That inevitably suggested that Euro-Zone monetary policy will remain accommodative for the foreseeable future and the Euro responded predictably.

The drop in EUR/GBP also came as the percentage of traders net long of the cross hit its highest level since February 25, according to IG client sentiment data.

As for Brexit, the only major development was the publication by the UK government of its “Great Repeal Bill” White Paper, setting out how it plans to replace, amend or scrap EU laws that currently apply to the UK. The bill would “end the supremacy” of EU law in the UK and deliver on the results of last year’s referendum, said UK Brexit Secretary David Davis.