- But impending two years of negotiations spells volatility for GBP and EUR crosses.

After nine months, the UK has delivered. The triggering of Article 50, though momentous, was well anticipated and largely priced into the market. The conciliatory tone from the UK and EU also helped quash any subsequent volatility in the markets. Neither will the event spur significant economic fallout.

British Prime Minister Theresa May’s historic divorce letter delivered to Donald Tusk, the President of the European Council, voiced the desire to agree a “deep and special partnership” with the EU. Later, addressing Parliament, May’s message was one of optimism and hope. She repeatedly stressed that the UK remains part of Europe. Her tone suggested ‘onward, towards a Brexit to benefit everyone’ -- on both sides of the English Channel.

The EU was equally conciliatory in response. It has previously dismissed May’s demands for trade negotiations to coincide with withdrawal terms. But today it said: “should substantial progress be made towards a withdrawal agreement then talks could start on the possible transitional arrangements on the basis of the intended framework for the United Kingdom’s future relationship with the EU”.

That said, we’re still in the dark about what a UK departure from the EU – Britain is the first country to trigger Article 50 - will ultimately look like. And now, the two-year period of long and complex negotiations begins between the UK and EU, with the financial markets exposed to the ebb and flow of every encounter. The devil will be in the detail, which spells more volatility ahead for Sterling and, to a lesser extent, Euro crosses.

Major sticking points between the UK and Brussels remain the rights of British citizens living in the EU and vice versa, and also trade and banking regulations. New standoffs and disputes are likely waiting to be discovered. Scotland’s intention to stage a fresh independence vote at around the time Britain leaves the EU, in the spring of 2019, is another void on the horizon.

In Parliament today, the prominent Brexiteer and Conservative MP Jacob Rees-Mogg, quoted Tudor explorer Sir Francis Drake (perhaps ironically, a hero to the British, but pirate to the Spanish) saying: “There must be a beginning of any great matter, but the continuing unto the end until it be thoroughly finished yields the true glory.”

Likewise, today marks the beginning of a new phase for Sterling. The Pound may even be set for a glorious rally as traders take profit on the record high Sterling short positions that have built up in recent months.

At present, after tumbling overnight, GBPUSD has pared back most of the losses and is flat on the day, trading at 1.2416. It’s a similar story with EURGBP, which after taking a roller-coaster ride is back to where it started, trading at around 0.865.

There’s more concern about the FTSE 100, which will suffer in the event of any Sterling rally. The indexes’ members also earn the bulk of their crust from Europe so are exposed to the machinations of the Brexit process. 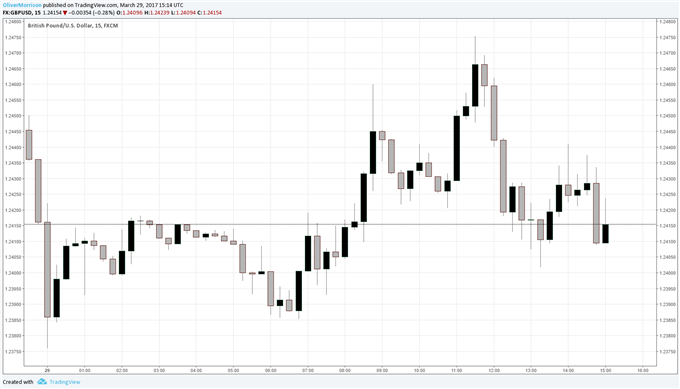