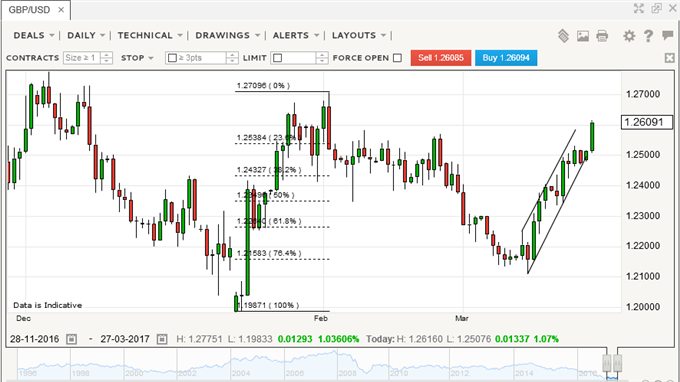 - Brexit looms but EU guidelines may take some time to be announced.

UK PM Theresa May will inform European Commission President Donald Tusk that the UK is leaving the single-bloc on Wednesday, triggering a potentially traumatic two years, or more, of claim, counter-claim and legal wrangling. Tusk is expected to issue the EU’s guidelines for the talks by the end of this week. And according to a recent report by Politico, the EU’s draft negotiating document will be ready for final consultation by April 19. EU ministers will then meet on April 27 before national leaders meet at a meeting on April 29 to ratify the document.

Despite this volatile backdrop for the British Pound, the UK currency pushed ahead Monday, aided by a weak USD complex, and boosted by a better-than-expected economic backdrop which has agitated the hawks on the MPC. And the hawkish members may have more reason to push for higher rates this Friday with the first look at the fourth-quarter UK current account expected to show that the balance of payment deficit has narrowed further due to the ongoing weakness of GBP.

And the recent move higher in Sterling may have caught some traders out with the latest CFTC Commitment of Traders Report showing short sterling positions have risen to multi-year high levels.