- Advance comes despite pressure for a second referendum on independence for Scotland.

- Brexit to be triggered on March 29.

The British Pound hit a high of 1.2436 in early European trade Monday before easing back a little, showing no sign of being affected by the increasingly acrimonious debate in the UK over calls for a second independence referendum for Scotland.

Some of that strength probably reflected concerns about trade protectionism hitting the US Dollar after finance ministers and central bankers from the G20 group of the world’s largest economies dropped a pledge Saturday to keep global trade free and open, reflecting an increasingly protectionist US, after a two-day meeting failed to yield a compromise.

Nonetheless, the DXY Dollar index was moving higher in Europe Monday, despite the Federal Reserve’s “dovish rate hike”, and the British Pound also gained against the Euro, suggesting independent Sterling strength following the news last week that one member of its Monetary Policy Committee voted for a rate increase at the last MPC meeting. 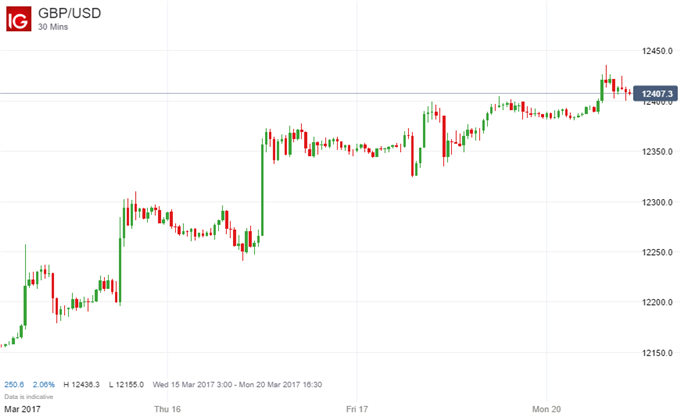 Perhaps surprisingly that comes despite several developments on Scottish independence over the weekend. Scotland’s First Minister Nicola Sturgeon told a conference of her Scottish National Party that “there will be an independence referendum”. Her predecessor Alex Salmond also said that he thought UK Prime Minister Theresa May's efforts to postpone a second referendum until after Brexit had the potential to backfire and embolden support for independence.

Separately, the new leader of Northern Ireland’s republican Sinn Fein party, Michelle O’Neill, has said that there should be a referendum on leaving the UK and joining the Republic of Ireland as “as soon as possible”, and UK PM May is visiting Wales Monday as she faces pressure to keep the union together in the wake of the Brexit vote.

Meanwhile, Spain has made clear that it will block any attempt by Scotland to join the EU, fearing that Scottish independence from the UK would lead to more pressure for independence from Spain of Catalonia. And PM May’s spokesman said Monday that she will trigger Article 50 of the Lisbon Treaty, the formal notification of the UK’s intention to leave the EU, on March 29.