- Any day now, UK Prime Minister Theresa May will trigger Article 50 of the Lisbon Treaty to begin the formal process of leaving the EU.

- Yet the British Pound is climbing, and not just because the Bank of England is sounding more hawkish.

Given the tumble in GBPUSD from around 1.48 the day before last June’s referendum on whether the UK should leave the EU to its current level close to 1.24, it might seem strange that the Pound is strengthening just as the British Government prepares to trigger Article 50 and thereby begin exit negotiations.

For sure, news on Thursday that one member of the Bank of England’s monetary policy committee voted for an interest rate increase at its latest meeting has helped it on its way up. However, as the chart below shows clearly, GBPUSD was moving higher even before the Bank surprised the markets. 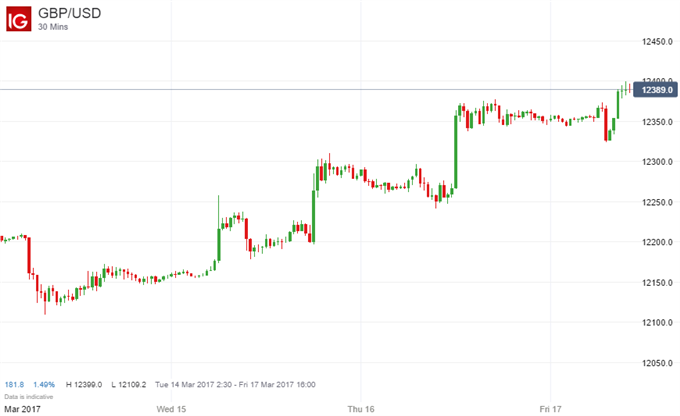 So what’s going on? One obvious possibility is profit-taking by traders who made money from Sterling’s weakness deciding to close their short positions to lock in their gains.

More fundamentally, the threat of the UK breaking up near-term following a second referendum on Scottish independence seems to have receded. Scotland could abandon a currency union with the rest of the UK if it gained independence, former Scottish First Minister Alex Salmond told the Financial Times newspaper today after his successor Nicola Sturgeon this week demanded a new independence referendum in late 2018 or early 2019.

However, UK Prime Minister Theresa May said on Thursday that “now is not the time” for such a vote and, while the bookmakers currently have the pro-independence side in the lead, the proposed timing is too far away to be a market factor yet.

In the meantime, the risk of UK interest rates being higher by the end of this year is rising. Judging by pricing in the overnight index swap (OIS) market, there’s now a 32.8% chance whereas previously the likelihood of a rate rise was seen as negligible.

As for this weekend’s meeting of G20 finance ministers in the German spa town of Baden-Baden, that looks likely to be dominated by any comments on US trade protectionism by US Treasury Secretary Steven Mnuchin rather than the question of Brexit.