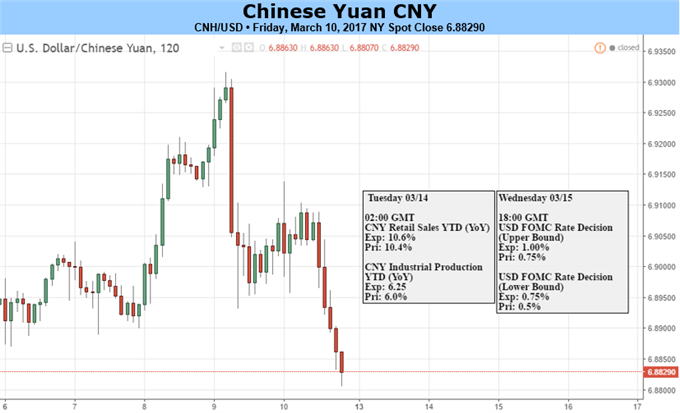 The USD/CNH fell to a major support zone around 6.8845 on Friday after the non-farm payroll report failed to inspire a bullish-run in the Dollar. Earlier in the Asian session, PBOC’s officials’ talks on exchange rates added strength to the Yuan as well; the USD/CNH pulled back from a key resistance level of 6.9088. Next week, policies from two central banks, the Fed and the PBOC, will continue to lead Dollar/Yuan moves. In terms of event risks, the growth print for China’s fixed assets may give out clues on the economic outlook.

The U.S. Federal Reserve will release the March rate decision on Wednesday with a nearly 100% odds of a rate hike. As this is widely expected and likely already priced-in, the main focus will be on Fed’s plan for future rate hikes. Also, PBOC’s governors comments indicate that Chinese regulators have been closely watching Fed’s policy and are less likely to go against major trends led by Fed rate hikes.

At the same time, Yuan’s borrowing costs saw increases in the offshore market, adding strength to the Yuan rate. As of this Friday, the funding costs for the Yuan, from overnight to 1-year term, have all remained elevated. PBOC’s governors’ remarks send out two signals: the regulator disagrees with excessive short speculation in the Yuan and it will use foreign reserves to stabilize the exchange rate when necessary. For a couple of instances that HIBOR rose significantly in the past, market had suspected that it was the Chinese regulator to squeeze out the Yuan short. As a result, traders will want to be cautious when HIBOR increases and keep a close eye on it.

Next week, China will release the report for growth in fixed assets. This gauge may not have much direct impact to the Yuan rate but it is a key indicator to evaluate China’s economy. As of the end of 2016, the expansion in fixed assets has dropped to 8.1%, the lowest level in 15 years; private investment in fixed assets, accounting for 60% of total investment, has improved slightly to 3.2% in December from a record-low of 2.1% in August, but this is still significantly lower than levels in previous years. As a major contributor to the GDP, growth in fixed assets may determine whether the country can achieve the 6.5% economic growth target in 2017.