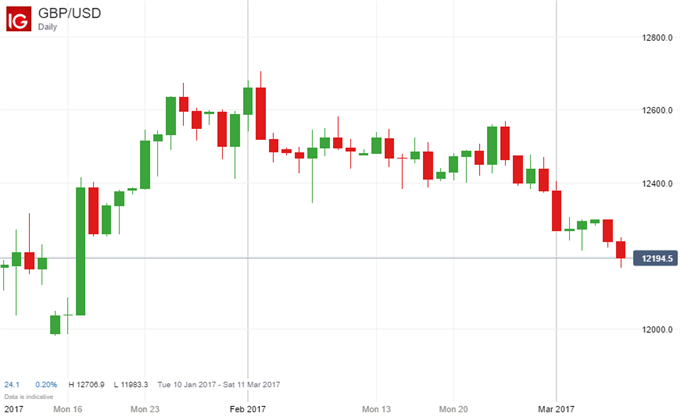 - The UK’s upper house will likely vote late Tuesday in favor of an amendment to the Brexit Bill.

- However, chances are it will be rejected by the lower house, which has the final say.

The House of Lords, the unelected upper house of the Westminster Parliament, is expected late Tuesday to pass an amendment to the Brexit Bill, requiring Parliamentary approval of any final agreement between the UK Government and the EU on the terms of the UK’s departure from the bloc.

However, any such amendment is likely to be thrown out by the elected House of Commons as UK Prime Minister Theresa May has made clear she wants the Bill to pass through the legislative process unaltered.

While the UK Parliament plays ping-pong with the Bill, the British Pound has fallen to its lowest level for seven weeks against the US Dollar as signs begin to emerge that the UK economy is beginning to suffer from the Brexit uncertainty.

This all poses a headache for UK Chancellor of the Exchequer Philip Hammond, who presents the UK Budget to Parliament Wednesday. He has promised to keep “reserves in the tank” to see the economy through the Brexit process, which will last at least two more years, signaling little room for the announcement of extra spending despite recent good news on UK borrowing.

In an interview, he said tensions are now easing with other EU countries. However, Germany’s hard-line Finance Minister Wolfgang Schaeuble told a group of foreign journalists in Berlin Tuesday that he believes the Brexit negotiations will be difficult and complicated. He said that at the conclusion of the negotiations it should be clear to everyone that remaining inside the EU has more advantages than being outside.

Overall, therefore, the chances of an imminent strong rally by the Pound seem slim following its steady decline against the Dollar since the beginning of last month.