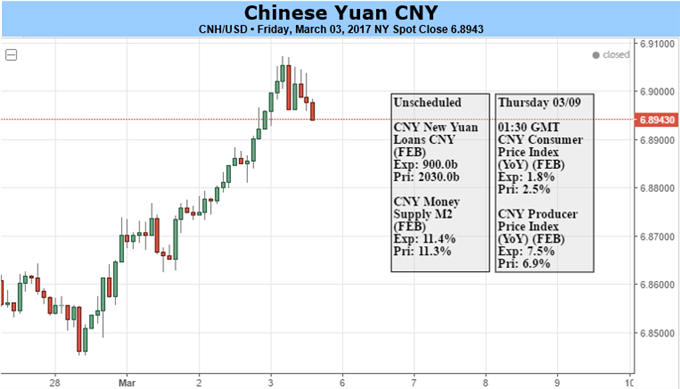 The USD/CNH broke above a key level of resistance at 6.8845 on Friday, driven by the Dollar advance following an increased odds in Fed rate hike. The offshore pair also climbed above the onshore USD/CNY, indicating a weaker Yuan in the offshore market. Looking forward, the Dollar strength, a heavy Chinese calendar and the on-going top Chinese conferences may add mixed moves to Dollar/Yuan rates.

The USD/CNH was right below 6.9088, the 61.8% retracement of the January drop, as of 3pm EST on Friday. This is the next key resistance level to watch for the offshore pair. A sustained break above this level may bring up the possibility of the long-term bullish trend in the offshore pair, which will be bearish for the Yuan. The U.S. Fed Chair Yellen said Friday afternoon that “March hike is appropriate if economy evolves as expected”. This makes all eye on the February Non-farm Payrolls print to be released on March 10th. If the read falls in line with Fed’s expectations, it may further boost the likelihood of a March rate hike. In turn, this would drive the Dollar/Yuan higher. Also, one of the voting members of FOMC, Neel Kashkari, will give a speech at 3pm EST next Monday. It could add some volatility to the FX market as well.

On China’s side, the National People’s Congress (NPC) will release the economic outlook and targets on Saturday night EST, which may drive Yuan moves. Also, a heavy calendar of Chinese data is likely to further elevate the Yuan’s volatility. Both exports and imports are expected to continue to improve in February according to consensus forecasts from Bloomberg. If that is the case, it will be good news for China amid an economic slowdown.

The New Yuan loans, a major indicator that may impact the PBOC’s monetary policy, is expected to drop to 920 billion Yuan in February from 2.030 trillion Yuan in the month prior, the second-highest level on record. In order to curb excess liquidity flowing into the housing market and other financial markets, the PBOC has been delicately managing its cash injections through open market operations. The Central Bank withdrew a net of 280 billion Yuan this week and has been removing liquidity from markets for the seventh consecutive trading days. The regulator targets to bring monetary policy back to neutral from slightly loose. Total new credit issued, home loans and property prices are three key gauges that the regulator may use to evaluate whether monetary policy has returned to neutral.

The February Consumer Price Index is likely to drop below 2% in February, after seasonal expansion in spending sent it to 2.5% in January. This leaves a significant amount of room before the gauge can reach the targeted 3% inflation rate (this ratio may be updated at China’s annual NPC meeting at NPC on Saturday night). Another indicator to keep an eye on is China’s foreign reserves, which is expected to continue to fall in February. Amid such drops, China may hesitate to support the Yuan as it will need to further burn foreign reserves.