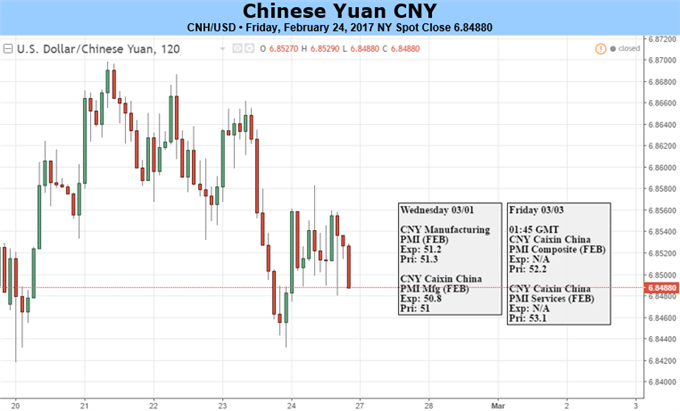 The USD/CNH failed to break above 6.87, the weekly high in late January, or to drop below 6.84, the lowest level set last week. Looking forward, there are a bunch of events dotted on both China’s and the U.S’ economic calendar, which could add some volatility to Dollar/Yuan rates. More importantly, China’s National People’s Congress (NPC), China’s parliament, will start annual meetings on March 5th; China’s top political advisors will start to meet at the annual People’s Political Consultative Conference (CPPCC) beginning on March 3rd. These two top legislative sessions are expected to cover key economic and financial topics, such as supply-side reforms, the economic outlook as well as the Yuan’s value.

One of the most important events for the NPC conference will be Premier Li Keqiang’s government work report. This will be delivered at the opening day of the NPC meetings. Economic growth and CPI targets for 2017 are expected to be released in this report. The Chinese government has been lowering both targets over the past few years. The actual annual GDP fell to 6.7% last year; it may drop further to 6.5% according to Chinese Academy of Social Sciences. In the work report, the government could either set a specific targeted ratio or a range for the growth. If the ratio or the lower band of a range is smaller than 6.5% (the odds is low though), it would be a huge bearish driver to the Yuan. In terms of the targeted CPI, the government is more likely to hold it unchanged at 3%.

Another key measure to be released in the report is the fiscal deficit ratio, which reflects China’s fiscal policy. China’s Central Bank has been tightening liquidity in the effort to bring monetary policy back to neutral, from slightly loose. Within such context, the country may have to reply more on fiscal policy to stimulate the economy. In the annual Central Economic Work Conference held in December 2016, policymakers told that China will adopt a more proactive fiscal policy. Yet, there are different opinions on how large the fiscal deficit ratio could be and should be: Some suggest that the ratio can go up to 4%-5%, while others argue that a 3% ratio is more appropriate as the economy has already seen rising risks in debt. For Yuan rates, increasing government spending as well as tax cuts could bolster growth and in turn, is good news.

Other than the top annual conferences, China will release both official and Caixin manufacturing PMI prints for February. Both gauges are expected to drop slightly from the month prior according to Bloomberg, though still to remain above 50, in the expansion territory. As Dollar/Yuan rates are more looking for clues of next trends, PMI reads may have limited impact to them. Yet, these prints could weight a lot on both mainland and Hong Kong’s equities.