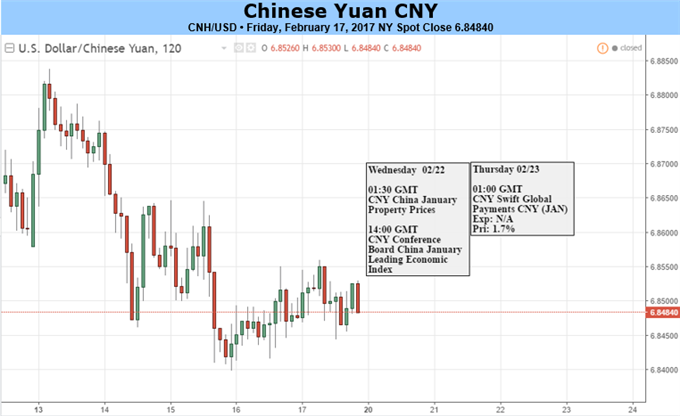 The USD/CNH set a higher low this week than the previous two weeks. The onshore Yuan, on the other hand, remained within a tight range for the third consecutive week. The two Dollar/Yuan pairs have been driven by different themes of recent: The Dollar’s strength weighted more on the offshore pair, while the onshore Yuan eyed more on moves from China’s Central Bank. As the spread between the offshore Yuan and the PBOC’s guided level narrows, this segregation could be eased over the following periods.

In terms of the offshore pair, the odds and timing of the U.S. Federal Reserve raising rates, as well as expectations on U.S. President Trump’s tax cuts plan have been primary drivers to its trend and this likely continue to be the case. Fed Chair Yellen’s two-day testimony added mixed moves to Dollar pairs, including the USD/CNH. Next week, the U.S. economic calendar is dotted with housing and labor gauges, which are expected to add volatility to Dollar pairs.

On China’s side, event risks would be low amid a light calendar; the major focus will be on China’s Central Bank. The top policymaker has been reducing excessive Yuan liquidity since the Lunar New Year, targeting at bring monetary policy back to normal from slightly loose. However, this tweaked credit strategy did not bring much impact to the offshore Yuan over the past few weeks. Normally, a tighter policy would send the county’s currency higher. Let’s take a look first at why it did not work, as this may help us find out when it will.

The PBOC has been using open market operations as well as lending facilities to withdraw excessive cash from the financial market. Suspending and resuming liquidity injections through reverse repos and increasing target lending rates aim to delicately adjust liquidity to desirable levels. These moves are different from a hike in reserve requirement ratio which will have a long-lasting effect to the economy and in turn a greater impact to the Yuan.