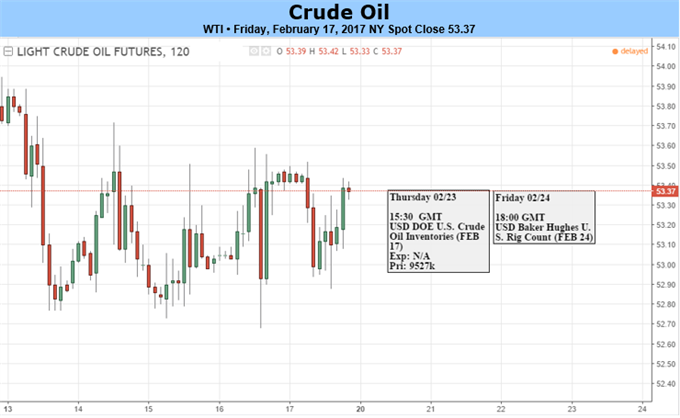 Where will the Crude Oil go in the first quarter of 2017? Get our forecast here!

Crude Oil looks poised to end the week lower for the first time in five weeks. However, there is a silver lining. As of Friday morning, the weekly price range in Crude Oil is the smallest in 13-years. If you had to pick a week to be on the wrong side of a long Oil trade, you picked a pretty good one.

Looking at the broader picture, there is naturally some angst building about price stability as US Stockpiles surge to new records. The price of Oil though doesn’t seem to mind as we’ve moved roughly sideways since the start of the year. Much of the credit for the lack of downward pressure has been given to the compliance of OPEC members in adhering to the production cuts that have helped to limit the previous supply imbalance.

We’ve recently heard figures as high as 92% about how much has been cutrelative to the promised amount. A significant factor to keep an eye on with Oil is not just the lack of price action since January, but rather the rising trend in other commodities like industrial metals. Headlines from Reuter’s this week helped further support Oil on reports that OPEC could extend or deepen supply cut at May meeting if oil stocks are still too high. Naturally, there tends to be a positive correlation to energy products like Oil and industrial metals. In the last week, the famous Dr. Copper (a term coined by the view the Copper holds predictive value in explaining global market demand,) recently surpassed the November peak.

The rise in industrial metals alongside the production cuts from OPEC could be setting up a convincing Bullish background for Crude Oil alongside rising inflation that is getting ever closer to Central Banker targets, and in the Fed’s case, has recently exceeded targets.

We continue to get an increasing amount of activated US rigs as shown via the Baker Hughes Rig Count alongside extreme positioning from hedging bears and speculative Bulls. The current Rig count moved up rigs in the U.S. TO 597, which has moved steadily higher from 404 in May of 2016. For perspective, the 5yr peak was 1989 active US Rigs back in 2012. It may seem surprising that this background has led to the lowest weekly trading range in 13-years and the lowest intraday ATR5) since 2014 (before Oil fell from $112 to a low of $26 in early 2016), but that’s the environment we find ourselves.

We should continue to look for news of growing demand that could flip the positioning bias in favor of the Bulls as hedgers may pull off of their short exposure, which we expect would help to lift the price.

The chart above should be encouraging to the Bulls, especially the patient ones as we look to have found a new and higher price floor that is highlighted on the chart above. This zone occupies the $50/52 per barrel range and the ability for the price to stay above this zone should favor that when volatility returns, it could very well take the price higher. How much higher is to be determined, but it’s fair to say we could make a move close to $60/bbl if the trend in Oil tries to match what has been seen in the industrial metal complex.

The focal points for the energy market next week will remain Wednesday’s EIA Petroleum Supply Report at 10:30 AM ET and Friday’s Baker-Hughes Rig Count at 1:00 PM ET. Next week also brings International Petroleum Week that takes place in London and will host many prominent members of OPEC.