- The Bill empowering the UK government to begin the formal process of leaving the EU is due to reach its final stages in the House of Commons later Wednesday, with voting due at 8pm London time.

- However, market attention is focused increasingly on France, where the far-right’s Marine Le Pen is a serious contender to be the next President and could take France out of the EU.

The UK’s House of Commons, the elected chamber of the Westminster Parliament, is expected to vote around 8pm local time Wednesday to allow Article 50 of the Lisbon Treaty to be triggered, paving the way for the UK to leave the EU. The Brexit Bill will then pass to the unelected House of Lords, which is expected to debate it later this month.

However, market attention is focused increasingly on this year’s French Presidential elections. The first round will be held on April 23 and, if no candidate wins a majority, a run-off between the two top candidates will be held on May 7.

These will take place against an increasingly bizarre political background. Former center-right President Nicolas Sarkozy, who lost the 2012 race, and failed in his bid to run again in this year's election, has been ordered to stand trial in an illegal campaign finance case. He faces accusations that his party falsified accounts in order to hide 18 million Euros of campaign spending in 2012, in a case known as the Bygmalion scandal.

Meanwhile his successor as leader of the Republicans, former Prime Minister Francois Fillon, has refused to quit over allegations he paid his wife from public funds for a fake job and has been hit by fresh claims that she was given generous severance payments. Moreover another candidate, centrist Emmanuel Macron, has been forced to deny an extramarital affair and has sought to kill rumours of a gay relationship outside his marriage.

This has boosted the chances of far-right candidate Marine Le Pen, who plans to replace the Euro with a basket of new national currencies, revoke the independence of the central bank and hold a Frexit referendum on France’s EU membership. The latest opinion polls suggest she could win the first round, though not by a sufficient margin to avoid a run-off against a second candidate. In the following round, the polls imply she would be defeated heavily by either Fillon or Macron.

However, the uncertainty has contributed to a slide in EURUSD, which has been dropping steadily this month. 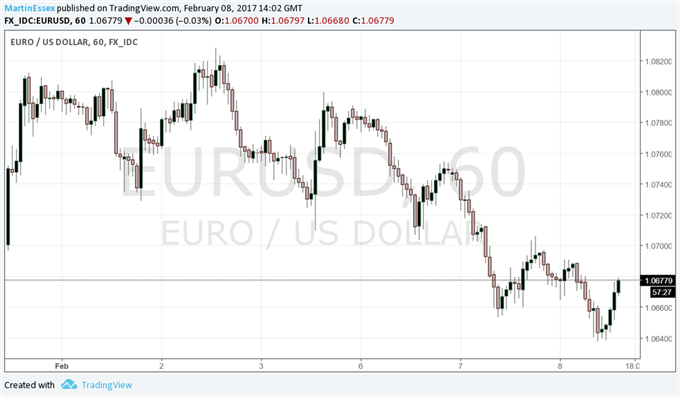 Data from Reuters also show the biggest bias for a weaker EURUSD in the options market since late June last year, while the difference between the yield on 10-year French and German government bonds has climbed to 78 basis points, its highest since November 2012. At the same time the price of gold, regarded as a haven at times of market stress, has advanced to its highest for three months.