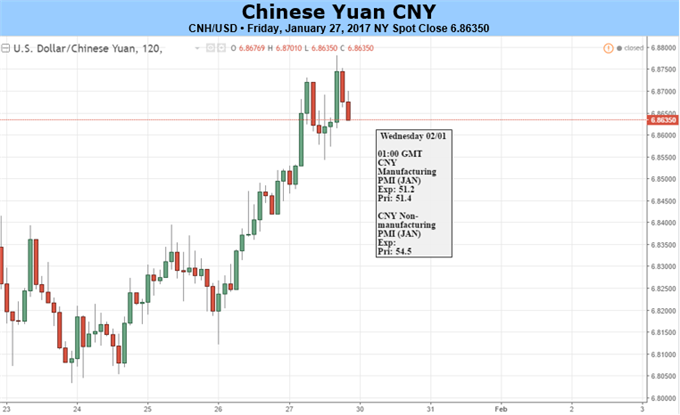 The offshore Yuan dropped below the PBOC’s daily guidance on Friday, the first time since January 4th. As of 3:00PM EST, the offshore Yuan remained stronger than the onshore Yuan. Chinese mainland financial markets will be closed from January 27th for the Lunar New Year and reopen on February 3rd; Hong Kong’s financial markets will be closed from January 27th and reopen on February 1st. FX volume around this major Chinese holiday is expected to fall significantly. However, there are a couple of top event risks that traders will want to keep an eye on when Hong Kong’s and mainland’s markets reopen on next Thursday and Friday.

China will release the Caixin PMI manufacturing print for January on Thursday, which is expected to drop slightly to 51.8 from 51.9, yet still in the expansion territory. The country’s industrial sector has showed improvement in the fourth quarter with multiple enhanced indicators. Yet, a more important question is that whether the recovery can be sustainable amid continued national production cuts and declining global demand. Investors who want to trade this news would first look to China’s official January PMI read to be released on Tuesday as a leading indicator: The official gauge includes the same five components in the Caixin PMI and uses the same calculation method. But, keep in mind that these two indicators measure companies in different sizes so they do not necessarily move in the same direction all the time.

Two major event risks from China’s counterpart is Fed’s February rate decision on Wednesday and the U.S. January Non-farm Payroll (NFP) print on Friday. The USD/CNH has been retracing within a range after the offshore Yuan strengthened to a two-month high. Within such a context, moves from the U.S. side may give out more clues on the next trend for the Dollar/Yuan. For Fed’s release on Wednesday, the benchmark interest rates will likely remain unchanged, with an odds of only 12% of a rate hike. There will be no updates on economic forecasts and no press conference from Chair Yellen; the major focus will be on the sentiment in Fed’s minutes. Also, the January U.S. labor market report is expected to heavily weigh on the Dollar/Yuan after China’s onshore markets reopen. Two weeks ago, Yellen addressed on positive development in the labor market. If the NFP print on Friday came in stronger, it will provide more support to the U.S. Dollar.

In addition to event risks, traders will want to watch Chinese regulators’ moves: The PBOC has been tightening onshore liquidity with a tweaked credit strategy. The Central Bank unexpectedly lifted two interest rates two days before the Chinese New Year, when the regulator normally increased cash injections in the past to ease holiday liquidity shortage. SAFE, the FX regulator, announced on Thursday to strengthen oversight on foreign exchange transactions in relate to trade and on cross-border Yuan transactions. On Wednesday, China Banking Regulatory Commission issued guidelines requiring banks to strengthen management on funds for outbound investment. Tightened regulations have been seen in Chinese markets and this will likely continue to be the case after the Lunar New Year.