The British Pound is enjoying a boost as investors digest the implications of yesterday’s court ruling on Brexit. The UK Supreme Court ruled that the government will need approval from Parliament to trigger divorce proceedings from the EU. This was seen as making a Pound-positive so-called ‘soft Brexit’ option more likely. However, the court also decided not to force the government to put Article 50 to a vote in the devolved parliaments in Scotland, Wales or Northern Ireland, triggering falls in Sterling against both the US Dollar and the Euro.

Now, though, it seems investors have decided to focus on the clarity given by the decision. After all, although it lost the court case, this was what the government was expecting, and for weeks it has been preparing to bring laws to Parliament to start the Brexit process. Today, UK Prime Minister Theresa May has announced the government will set out its Brexit plans in a formal policy document that will contain her “bold” proposals for negotiations with the EU.

And passing the bill to evoke Article 50 should now be just a formality. Parliament could, in theory, vote against Brexit. But in practice, no one thinks that will happen. This has all helped Cable. After dropping to 1.2147 in London trading Tuesday, GBPUSD has gained ground to hit a session high of 1.2607 Wednesday.

If anything, attention has switched back to the possibleimpact of Brexit – whatever form that eventually takes – on the UK economy in the long run.

Take today’s strong set of figures released by the Confederation of British Industry, which provide more evidence that there has been little impact so far on the UK economy from last year’s Brexit vote to leave the European Union. Thanks to the weaker Pound post Brexit “UK manufacturers are firing on all cylinders right now with domestic orders up and optimism rising at the fastest pace in two years,” said Rain Newton-Smith, chief economist at the CBI. But she added that weaker Sterling is also “having a detrimental impact on costs for firms and ultimately for consumers”.

With rising price pressures there will be mounting speculation that the Bank of England could raise interest rates eventually, although no such move is expected anytime soon. 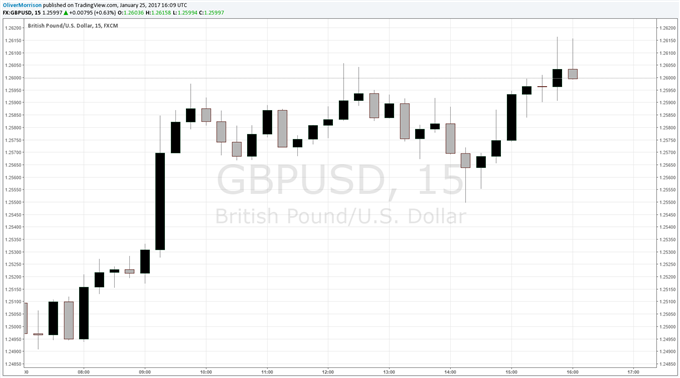