US Rig Count Jumps Most Week-on-Week Since Q2 2013, Yet Oil Supported 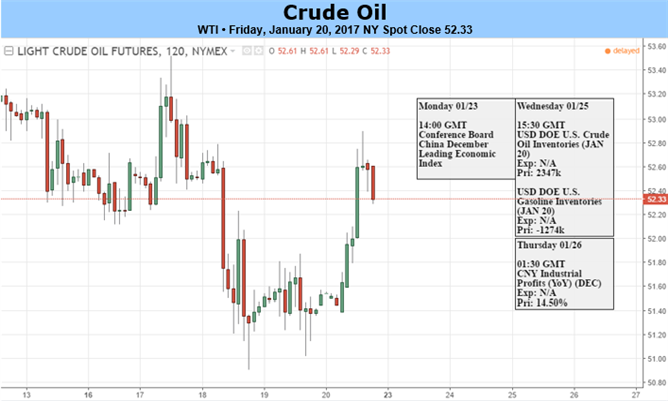 Where will the Crude Oil go in the first quarter of 2017? Get our forecast here !

Oil Traders could have taken the first three weeks of the trading year off given the lack of volatility, but for multiple reasons, we do not expect this quiet price action to continue. Oil contract demand seems to have slowed down at the beginning of the year as UST yields also slowed their ascent. However, as Donald Trump takes the Office as the 45th US President, there is still focus on whether or not he can deliver the inflation that many Central Bankers have had a hard time generating.

From a short-term fundamental perspective, we do see US producers working to fill the gap brought by OPEC and select non-OPEC country cuts as Department of Energy Inventory data on Thursday showed an aggressive rise in US inventories. A surprise Cushing draw helped balance out the knee-jerk reaction. Adding to the possible concern of US-based oversupply came on Friday during Trump’s inauguration as Baker Hughes showed that US rig count jumped by the most week-on-week since Q2 2013.

Recent comments from at Davos from Nigeria’s Barkindo, the OPEC Secretary General informed markets that the OPEC cut was not expected to last beyond its original 6-month intention. While some may anticipate that such an announcement would disappoint Bulls, an encouraging piece of data for those anticipating further upside in Crude came out of China. Reuters reported that China’s National Development and Reform Commission said on Tuesday that their Crude output would drop from the 2011-2015 range of 215mn tonnes to 200mn tonnes, which equates to near 4mn barrels per day drop in output.

From a longer-term fundamental perspective, there is a traditional focus on commodities as an inflation hedge, which has become an important topic in recent months. We have seen a 97.5% rise in a key inflation benchmark, the US Treasury 10-year yield from Summer 2016 after the last panic purchase of Treasuries on Brexit-Fear played out. The recent move has acted in a similar fashion as the “taper tantrum” of 2012/13 that saw a rise of 163bps or 116.5% in the 10yr that aligned with Oil rising from the upper-$70 region to above $110 in late August 2013. Both yields and Oil peaked within a week of each other before a consolidation and an eventual breakdown. Therefore, for the Bullish Oil trade to work out, we would likely need a moderately weaker Dollar aided by higher inflation expectations, which can be viewed directly from the bond market.

On the technical standpoint, Oil has a few competing views like a Bearish Head & Shoulders topping pattern or a Bullish polarity point, which is yet to be fully validated. Either way, if we see inflation expectations via the sovereign bond market beginning to pull higher, we could see the polarity point hold and a move higher in Oil develop. However, a breakdown in inflation expectations, which would likely align with a strengthening JPY should be watched if Oil breaks down and begins to play out the possible Bear and Shoulders pattern.

The focal points for the energy market next week will remain Wednesday’s EIA Petroleum Supply Report at 10:30 AM ET and Friday’s Baker-Hughes Righ Count at 1:00 PM ET. As mentioned above, an unusual amount of focus will likely remain on macro markets like FX & rates to see how inflation expectations are getting priced in as more information comes in about inflation-inducing policies and sentiment in Trump’s America. 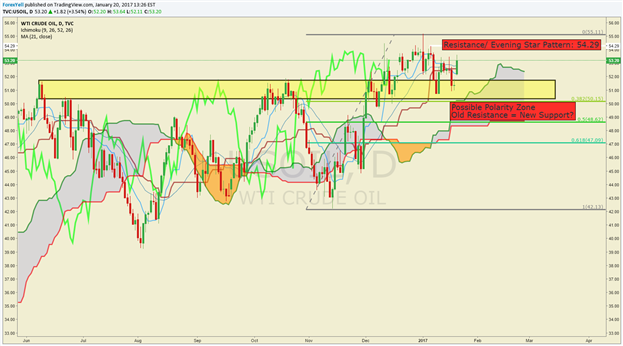