- The British Pound may bounce back in the short-term if dire exit predictions are unfounded.

The British Pound headed back towards the recent GBPUSD ‘flash crash’ low after news coverage over the weekend pointed to PM Theresa May looking at a clean break from the European Union. While her press office came out Monday and called reports speculative, markets are on the defensive ahead of May’s speech on Tuesday January 17. Reports over the weekend said the PM May could signal that she is prepared to pull the UK out of the single market and customs union – a ‘hard’ Brexit - while she will also call for the country to unite ahead of the exit negotiations.

UK Chancellor Hammond's recent comments suggesting that the UK Government will do whatever it takes to keep the country competitive have also added weight to the theory that PM May will announce a clean break. In an interview with German newspaper Welt am Sonntag, Hammond said that if the UK was denied access to the European market, then the UK will have to adapt and become something different.

"In this case, we could be forced to change our economic model and we will have to change our model to regain competitiveness. And you can be sure we will do whatever we have to do.”

He added, "The British people are not going to lie down and say, too bad, we've been wounded. We will change our model, and we will come back, and we will be competitively engaged."

And PM May will have to be clear on the government’s Brexit plans on Tuesday to dispel any more press talk of ‘muddled thinking’ on the upcoming divorce proceedings with the UK population also looking for clarity, according to the latest research from polling company YouGov. The survey shows that currently one in five Britons say they don’t know what the government’s Brexit priorities are, while the rest are relatively split on what the government is trying to achieve. YouGov write that four in ten people think the government is working towards a ‘hard’ Brexit, around 28% see a ‘soft’ Brexit, with the balance made up of unsure, remaining in the EU and associate membership.

While politics continue to weigh on the British Pound, clarity at tomorrow’s press conference may well instil some strength in the UK currency which has doggedly refused to react to the recent strong economic data coming out of the country. Recent Bank of England upgrades to growth and inflation expectations, strong manufacturing and services sentiment surveys and production data have all been ignored by the UK currency as Brexit concerns reign. Other asset classes seem to be taking a different stance. The export-orientated FTSE 100 is trading at an all-time high and is up 17% from pre-Brexit levels and nearly 22% from the post-referendum lows. The domestically-orientated FTSE 250, is also hitting fresh highs and is 6% higher pre-vote and nearly 14% higher from its post-vote low. 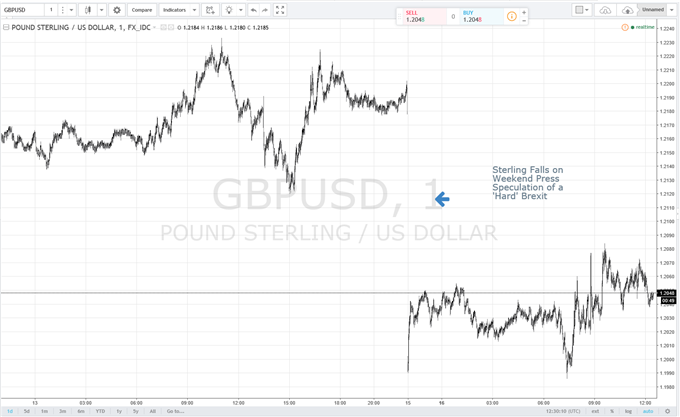