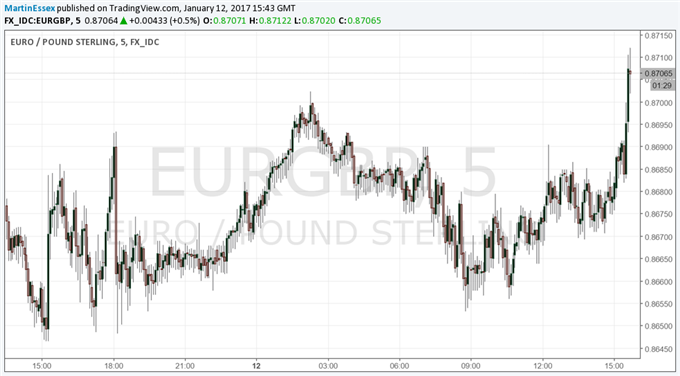 - Bank of England Governor Mark Carney was upbeat about the UK economy Wednesday.

Traders’ minds were so full of US President-Elect Donald Trump’s press conference Wednesday that comments by Bank of England Governor Mark Carney went almost unnoticed. In fact, they were worth listening to because they implied a higher chance that UK interest rates will increase this year, potentially benefiting the British Pound.

In his testimony to lawmakers on the House of Commons Treasury Committee, Carney made it clear that the UK central bank now sees higher economic growth than previously expected, and also a rise in inflation. In response, traders raised the probability of a UK rate increase by the end of 2017 to 25%, from 20% at the start of the year, according to Bloomberg data. That, in turn, implies a firmer British Pound. The chances of a loosening of monetary policy are now precisely zero, according to the data.

It’s hard to judge the reaction to the comments because trading in GBPUSD was dominated Thursday by the US Dollar’s swoon after Trump had little to say about his tax and spending plans. However, EURGBP has actually climbed since Carney’s testimony, suggesting it was either missed or ignored.

The Bank of England will publish its next set of economic forecasts on February 2 and the likelihood now is that the growth predictions will be raised. Carney said that recent data are “consistent with some further upgrade” and also that inflation is seeing a “notable” increase.

The immediate risk posed by Brexit to the UK economy has declined, he added, although the overall level of risk is still “elevated” and is greater for continental Europe than for the UK. The implication of the last comment is that the Bank of England will be more hawkish than the European Central Bank, which hinted in Thursday’s account of its policy meeting on December 8 that it could loosen monetary policy still further this year, meaning the yield advantage of UK government bonds over those of Germany and France, for example, could rise – potentially weakening EURGBP.

Meanwhile, UK Prime Minister Theresa May said on Thursday that she will deliver her long-awaited Brexit speech next Tuesday, setting out her approach before triggering Article 50 that will begin the divorce proceedings between the UK and the EU.