- The resignation of Sir Ivan Rogers, the UK ambassador to the EU, continues to reverberate in the markets.

- But, so far at least, traders in the British Pound are taking it in their stride.

The British newspapers, radio and television have been dominated Wednesday by the resignation of Sir Ivan Rogers, the UK ambassador to the EU, but to date at least the markets are taking a more sanguine view of his decision.

Rogers is a career diplomat whose resignation letter left little doubt about his negative view of the British government’s approach to the divorce negotiations and, while his criticism was coded, it was clear nonetheless. His comments that an agreement could take 10 years to finalize had already angered the keen “Brexiteers” and praise for him from the European Commission will have angered them more.

Now, the debate about who will replace him has started already – with some arguing that his successor should be a politician or a seasoned banker rather than a bureaucrat. Names in the frame so far include Nigel Farage of the United Kingdom Independence Party (UKIP), Jon Cunliffe, deputy governor of the Bank of England, and Michael Ellam, a managing director at the bank HSBC.

Remarkably, though, there’s been little sign of angst in the financial markets, where the British Pound moved ahead steadily against the US Dollar, although it slipped a little against a firm Euro. 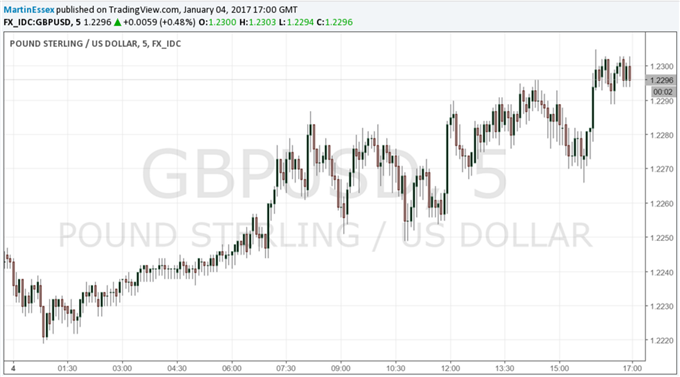 Instead, the Pound benefited from some firm data that continue to suggest there’s been little damage to the British economy from the UK vote to leave the EU. The Purchasing Managers’ Index (PMI) for the UK construction sector in December jumped to 54.2, its highest level for 11 months. That was higher than both the expected 52.6 and the previous month’s 52.8. UK mortgage approvals in November were the highest since March and net consumer credit showed its biggest monthly rise since March 2005.

The FTSE 100 index of the largest London-listed shares finished the day marginally higher as concern about the retail sector following a bleak outlook from clothing chain Next was outweighed by optimism about housebuilding stocks following the PMI. As for Thursday, assuming politics don’t dominate again, attention will focus on the service-sector and composite PMIs.