A Chart View of What Will Drive the Majors in 2017

They say a picture is worth a thousand words. So, I will try to give 8,000 words worth of fundamental analysis with 8 charts showing what the key themes for the FX majors are in 2017. We attempt to focus on the most important elements for the world’s most liquid currencies using charts. By keeping tabs on these fundamental themes – and perhaps even their data/visual representations – you will have a better foundation on which to analyze the market moving forward.

Dollar (US) Tied to Monetary Policy and Risk Appetite

The first chart is something of a cheat. It includes two fundamental influences on the Dollar; but as it happens, they are intrinsically related. The candle stick price feed is the DXY Dollar Index while the red line is the implied yield from the December Fed Funds futures contract. Rapidly rising rate forecasts for the FOMC was a key driver through the final months of 2016. This influence will no doubt carry forward, but the central bank’s ability to normalize policy will depend on steady markets. Therefore, if the S&P 500 (blue line) were to falter, implied rate forecasts would slide and therefore so would the Dollar. 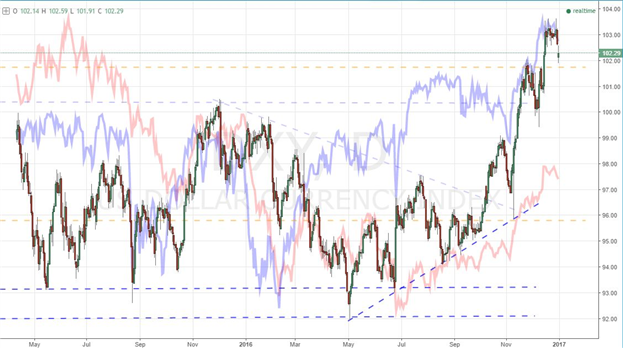 For any currency cross, the most liquid and fundamentally motivated component of the pair will win carry most of the influence over the exchange rate’s bearings and pace. For USD/CAD (candle price), the Dollar is clearly the far more liquid counterpart. That said, skew does not distort a clear correlation to US Oil prices (inverted in red) too often. Heading into the end of the year, this relationship saw its largest divergence form the norm in two-and-a-half years. The departure comes under strong motivation, but history says it won’t stray for long – a soaring Dollar impact oil as much as it does USD/CAD. Watch to see when – not if – this relationship snaps back. 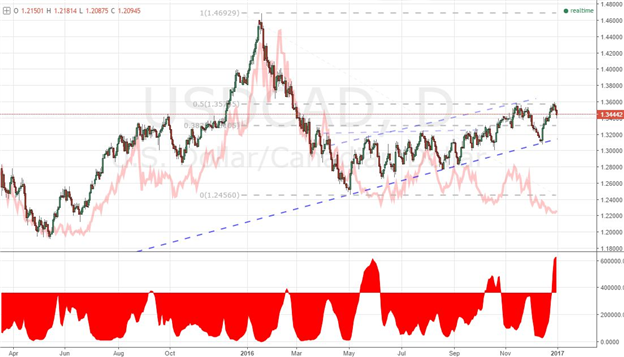 Euro (Eurozone) Seeking Safety Inside or Outside the Boarders

There is an existential crisis facing the Eurozone. The scourge of financial crisis has lingered around the region and currency for more than six years now when the debt crisis was detonated by Greece. No lasting solution to the underlying problems have been offered since, and the festering economic and financial issues are leading to deeper discontent. The UK’s decision to leave the EU is in part a side effect of these issues. That divorce has lit the fuse for more destructive developments moving forward. The risk is that other members of the EU – and more critically the EMU that represents the Euro – will decide to leave. That will fundamentally change the position of the Euro in the system for investors, reserves and institutional needs. There are different outlets to watch this risk like sovereign credit risk, but below (in green) is the German Bund yield which is one of the pinnacles of safety for Europe. If demand for Treasuries and foreign credit-equivalent debt outpaces Germany’s it can signal a unique fear. 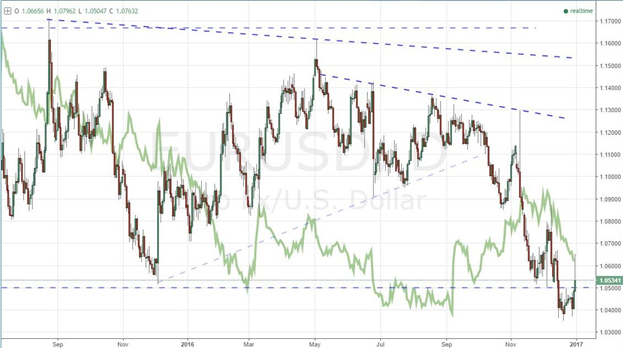 There should be neither doubt nor surprise that the British Pound is following the guidance of the Brexit. This remarkable economic event will significantly change the UK economy and financial system – not to mention the relationships the country has with its major counterparts. The fixation, however, draws some incongruities. For one, the economic fears that would undermine the Pound are also encouraging UK shares (the FTSE 100 is in blue below) to considerable gains. Regardless of currency-adjusted values, the disparity contradicts the expected. Furthermore, the currency seems to reflect ‘worst-case-scenario’ which is highly unlikely given the aims of the parties negotiating the Brexit. Keep an eye on the developments of the divorce as well as the discrepancies in views between different markets. 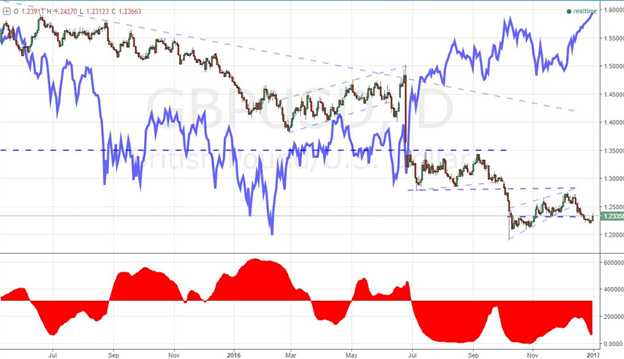 Swiss Franc (Switzerland) is Evidence that Intervention Lingers and Is Ineffective

EUR/CHF through 2016 looked a lot like EUR/CHF from 2011 to 2015 which the Swiss National Bank (SNB) was intervening on behalf of the exchange rate to keep a floor under the pair at 1.20000. That effort t failed – spectacularly – and the central bank seemed to all but abandon the direct interference approach. Yet, here we are around 1.0600 and 1.0750 with hesitation. This may be genuine market reflection, but the SNB has made it clear it is keeping all outlets including intervention open. There will be many policy bodies interfering in FX markets in 2017, but the CHF will be one of most liquid. 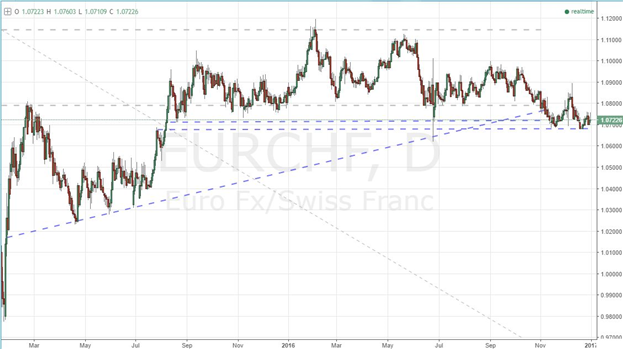 For better or worse, the Japanese Yen still plays the role of funding currency in the carry trade. This has recently diminished from its traditional path due to the interference of the Bank of Japan (BoJ) as it ramped up efforts to stimulus the economy – and some would say devalue the currency. The policy authority was certainly effective for a while, but we have seen the rise and now the fall in the effectiveness of this manipulative influence from central banks. While the BoJ turns its policy settings on autopilot – albeit at the equivalent of 100 miles per hour – the focus now turns to the traditional influence of what motivates capital flows into and out of such a low yielding currency. That means a stronger relationship to ‘risk trends’ (below purple line is the Nikkei 225). If risk aversion were to kick in, speculators will freely reduce their long Yen cross position as the buoyancy is neither attractive for the sake of returns or the central bank’s influence. 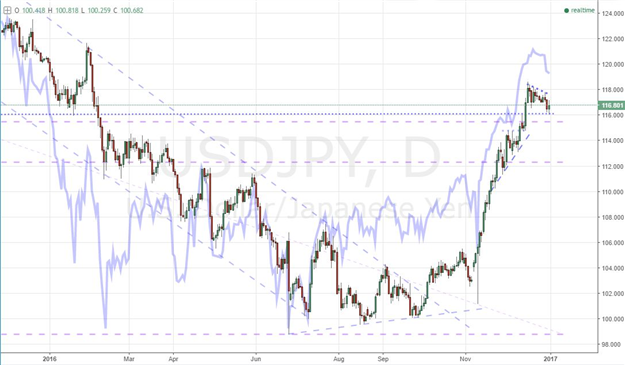 China Yuan Reflects a Clash of the Titans

The USD/CNY exchange rate is crucial as a baseline for the FX market and an indicator of the smooth operation of the global financial system. The US and China are the world’s two largest economies and their harmony is critical for the healthy circulation of investment capital the world over. Yet, this symbiotic engine of global growth is coming under severe pressure with China struggling to maintain growth amid a financial bubble while the US will inaugurate a President that has vowed to retaliate for perceived unfair trade practices. When risks rise (the red line below is the CBOE’s China Volatility Index), capital does not flow into China. It flees. Beware the risk this signal can reflect. 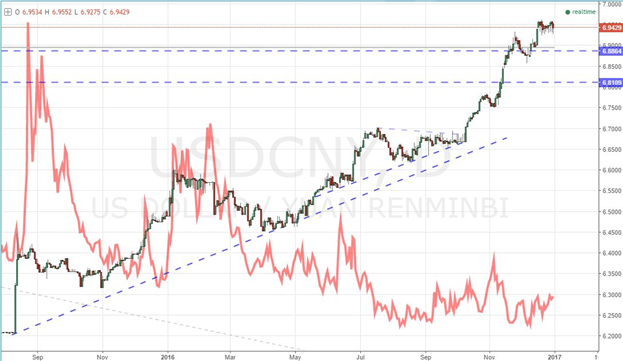 There are many roles that the Australian Dollar plays out of virtue of its size. While it is considered a ‘major’ it doesn’t come close to the influence of a Dollar, Euro or Yen. Therefore, the tides that can influence its direction are more diverse. Over the past year, we have seen its motivations shift from its carry potential via RBA efforts and risk asset rallies, growth benchmark through local data and exporter with correlations to certain commodities. As it happens, I think a correlation to key natural resources (below orange line is gold) can encompass many of these different rolls. The Australian Dollar’s well-being is spurred by healthy global forecasts that encourage appetite for higher yield, demand for raw materials to fuel growth and in turn encourage policy tightening to curb the subsequent inflation. Gold has a few fundamental distorting quarks, but so too does the US Dollar in this equation. 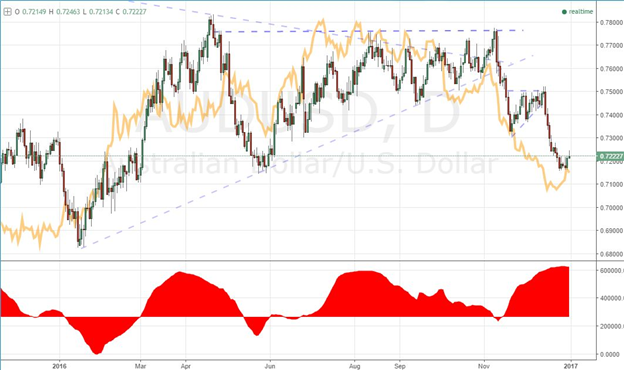 The New Zealand Dollar follows many of the same fundamental cues as its Australian counterpart. However, its influences may be a little more concentrated. One of my favorite questions to ask FX traders is ‘why do you think the Kiwi is considered one of the world’s major currencies’. It isn’t due to the size of the economy or its critical trade position. The foundation for this appeal is heavily rooted in its higher yield and the exceptionally high sovereign credit rating. While much of the fixation has been on the Dollar for the monetary policy contrast, far fewer have taken note of the fact that swaps are pricing in at least one Reserve Bank of New Zealand (RBNZ) rate hike in 2017. The early strength from the Dollar when it first was set on its hawkish path comes to mind. Keep tabs on the Kiwi Dollar and carry appetite (the green line below is the Deutsche Bank Carry Harvest Index) through the coming year. 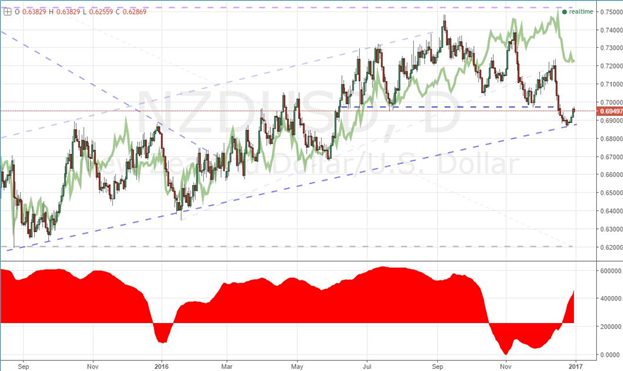