The Real Power of OPEC Will Be Revealed in Q1 2017

For traders who like to simplify the markets to a game of supply vs. demand, the Oil market in Q1 2017 should be their World Cup. Heading into the New Year, the OPEC and non-OPEC members will cut supply to the agreed upon amounts. Given this intent, the International Energy Agency (IEA) says recent OPEC action would place the Oil market into a supply deficit. The deficit would be engineered on a mixture of consistent demand combined with OPEC and other producers following through on their pledge to cut supply starting January 1. The view of consistent demand has been supported by consistent inventory draws reported by the Department of Energy as forecasted inventory builds were repeatedly confronted with actual inventory draws in late 2016.

In Vienna, OPEC announced they anticipate ~600,000 fewerbarrels per day of production in H1, 2017. Along with this, the IEA also increased its forecast for global oil demand in 2017 by 100k bpd, stating consumption is likely to rise by 1.4% to 97.6 million barrels a day. In mid-December when non-OPEC producers like Russia, Mexico, and others aligned with OPEC to help balance the over-supply imbalance, Saudi Oil Minister Khalid Al-Falih said at the post-meeting press conference in Vienna that he is willing to cut the Saudi’s production even deeper than already promised. OPEC has agreed to reduce output by 1.2mn bpd from next year with Saudi cutting as much as 486k bpd.

With the IEA forecasted balance of supply and demand moving from H2 2017 to H1 2017, many will look to U.S. Shale production to see if they can negate much of what OPEC is attempting to accomplish.

How the U.S. producer’s respond and impact global Oil markets may be determined as the market gets a better idea of how the President-Elect’s energy policy as well as how well OPEC members and agreeing non-members hold to the commitment to cut. There is a presumption of an Energy friendly U.S. administration as Exxon CEO; Rex Tillerson was tapped to become the Secretary of State and Independent E&P CEOs expect less interference and environmental taxes from the government toward reaching desired production amounts.

As of mid-December, speculators in Oil added more long positions to match the highest levels since late October. Investor positioning data showed a +45% increase in money manager net long positions on crude to 723k lots (per the COT). To sustain this elevated level of investor positioning, and therefore oil prices, then investors will likely have to remain convinced that the deal remains credible as cuts are confirmed in the first months of 2017 as export/production data is released, and that US rig counts won’t increase too rapidly.

Lastly, while many are looking for prices to move aggressively higher, it is worth noting OPEC is not specifically targeting higher price levels, but rather market balance. Therefore, we could see an increase in production if demand is anticipated to pick up or U.S. E&P’s are seen taking too much market share, which would limit the potential upside.

Crude oil price continues to maintain some wind to its sails though we are anticipating some sideways trade during Q1 with the potential for drift higher later in the year. Crude oil prices may spend a good portion of the quarter between $40 and $57.

Crude oil price has been reacting positively to the 200 day simple moving average bouncing off the line twice during the previous quarter. This makes seven successful turns in the past 19 months with one failed pivot. Now that the moving average is trending higher, it will become more difficult for prices to hold above it. Do not be surprised to see a false break below this line in Q1.

Many of the technical patterns are incomplete to the topside. However, that does not prevent a dip in price. If the 200-day simple moving average cannot hold, then look for price to test the topside of the weekly Ichimoku cloud near $43 (not shown).

The key level to watch for Bulls is around $40. Below there and the market is at risk of a greater sell-off. As long as prices are above $40, the door is open for sideways and possibly higher trade. 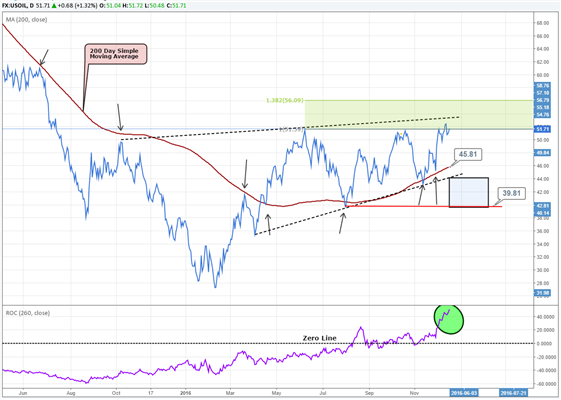