- An upwardly revised third-quarter UK economic growth figure continues to show no discernible impact from the decision to leave the EU.

- The British Pound is firmer against both the US Dollar and the Euro after the data but GBPUSD is still not far from its October lows.

The British Pound moved gently higher in European morning trade on Friday after the third-quarter UK economic growth figure was revised higher. GDP growth quarter-over-quarter was revised to 0.6% in the July-September period from the 0.5% previously estimated; however, the year-over-year figure was revised down to 2.2% from 2.3%.

The data, which relate wholly to the period after the British electorate voted on June 23 to leave the EU, continue to suggest there has been no impact on the economy so far from the decision. UK GDP in volume terms was up from the previous estimate thanks to upward revisions from the output of the business services and finance industries. It was the 15th consecutive quarter of positive growth since the January to March period of 2013 but the data for both the first and second quarters of 2016 were revised down by 0.1 percentage points, while the figure for the third quarter was revised up by 0.1 percentage points.

“Robust consumer demand continued to help the UK economy grow steadily in the third quarter of 2016. Growth was slightly stronger than first thought, though, due to greater output in the financial sector,” noted Darren Morgan, head of GDP at the Office for National Statistics.

Immediately after the figures were released, EURGBP slipped back while GBPUSD was moderately higher but only just above the lows reached in October and still below the 1.23 level that some commentators see as important psychologically. 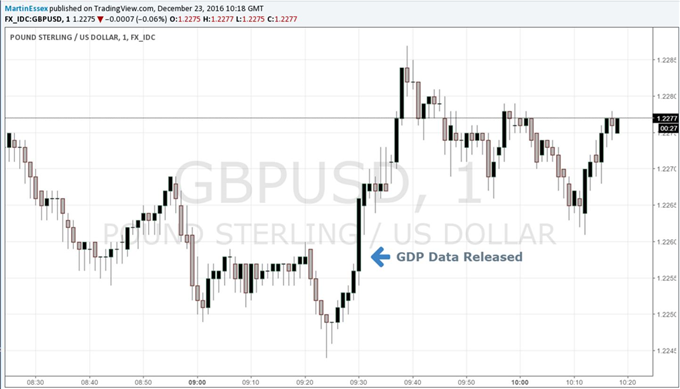 Growth in the UK service sector was revised up to 0.3% from 0.2% but the current account deficit was estimated at 5.2% of GDP, up from 4.6% in the second quarter, and the rise in business investment was revised down to 0.4% from the previous estimate of 0.9%.

Separately, the Lloyds Business Barometer suggested that UK business confidence ended the year at its highest level since March, boosted by a jump in economic optimism. Companies’ own business prospects for the coming year remained strong, despite edging lower from last month, and sentiment improved in the industrial, consumer services and business services sectors, although hiring intentions fell to their lowest level since February.

While some profit taking in the US Dollar is still expected after its recent strength, the current turmoil in the European banking sector looks set to unsettle both the Euro and the Pound for a while yet. There is relief that troubled Italian lender Monte dei Paschi has been assured a bailout, while Deutsche Bank and Credit Suisse have settled with the US Department of Justice for pre-financial-crisis mis-selling, but the UK’s Barclays is still holding out for a smaller fine.