- According to Forbes, the UK is now the fifth best country to do business in, up from tenth a year ago.

- However, a ruling by the EU’s top court could complicate the divorce proceedings between the EU and the UK.

The UK is now the fifth best country to do business in, up from tenth a year ago, according to an annual list published by Forbes. That flies in the face of warnings by remain campaigners ahead of June’s UK referendum on EU membership that a decision to leave would be devastating for the British economy.

Kurt Badenhausen, a senior editor at Forbes, said the UK had climbed the rankings “thanks to improved scores on corruption, tax burden and monetary freedom, as well as a stronger stock market”.There was no mention of the impact of the Brexit vote

Since the June 23 referendum, which resulted in a vote to leave, the FTSE 100 index of the largest London-listed companies’ share prices has climbed by 700 points, or 11.1%, to above 7,000 at the time of writing. 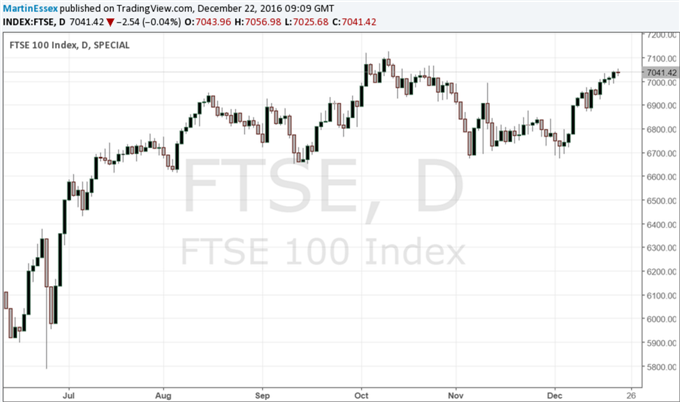 The British Pound, which tumbled immediately after the referendum, has since steadied but its drop will have helped UK companies that export, and by extension the UK economy.

Elsewhere, the US fell one spot to 23rd place, continuing a decade-long slide from its No.1 ranking in 2006, according to Forbes. “Falling scores on trade and monetary freedom, along with rising levels of red tape and bureaucracy are behind the decline for the world’s largest economy,” commented Badenhausen. Sweden moved up four spots to top the charts for the first time, followed by New Zealand, Hong Kong and Ireland. Chad, in central Africa, was last.

In a separate development, the EU’s top court ruled on Wednesday that ratification by EU institutions isn’t enough to pass a trade deal with Singapore. As Daily FX noted, that could set a precedent for the Brexit negotiations.

The EU Court of Justice advocate-general’s view that member states must also approve the accord with the Asian city state means UK Prime Minister Theresa May might have to negotiate with 27 other national parliaments and in some cases their regional lawmakers if she wants a wide-ranging trade agreement with the bloc.