The Pound moved marginally lower Monday morning after a weekend article in the Financial Times showed that Scotland may push for another referendum on independence. According to the article, Scotland’s First Lady Nicola Sturgeon said that the best option for Scotland “remains full membership of the EU as an independent member state”. Sturgeon added: “Independence must remain an option for safeguarding our European status, if it becomes clear that our interests cannot be protected in any other way.”

Scotland rejected the chance for independence from the UK in a vote on September 18, 2014 by 55% to 45% after a prolonged and bitter campaign. After the vote Spain’s Prime Minister Mariano Rajoy made it clear that Scotland would not be allowed to negotiate with the EU, saying that if the UK leaves, Scotland leaves. Spain has its own concerns with independence movements in the Basque and Catalonia regions and fears that any special arrangements for Scotland could boost further referendum calls.

In a BBC interview over the weekend, British Trade Minister Liam Fox said that the UK may look for a transitional period to ease the country’s exit from the European Union but warned against signing a deal that was too similar to bloc membership. UK businesses have been pushing for a transitional deal, or "soft-Brexit" to smooth the process of the UK leaving the EU, avoiding a "cliff-edge" if the Government misses the two-year Brexit deadline.

The British Pound remained stable in morning trade, after giving back some of its recent gains last week. Against the US Dollar, the Pound traded at 1.2465 after having ticked above 1.2700 just under a week ago. From a technical point of view however, sterling may see fresh falls as we head into the year-end, with the down-trend being reasserted, according to DailyFX Senior Currency Strategist Ilya Spivak - GBP/USD Strategy: Looking to Enter Short Above 1.25. 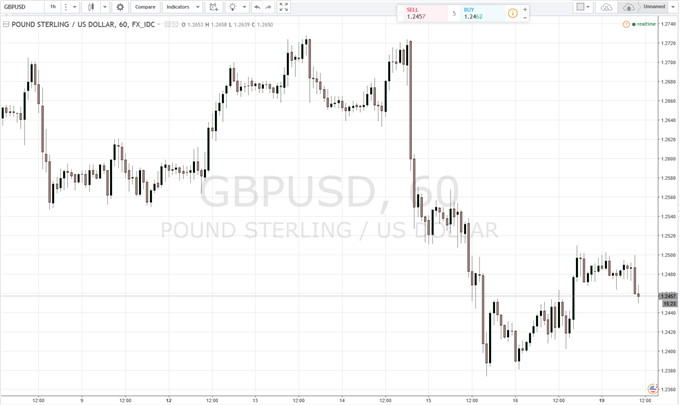