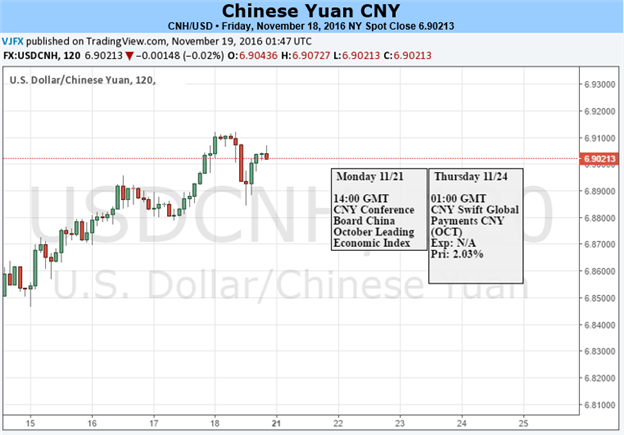 Yuan May Retrace in Near Term on Domestic Factors

Both the onshore and offshore Yuan extended losses against the U.S. Dollar for the second consecutive week amid the Dollar strength: the USD/CNH set record highs (record lows for the offshore Yuan) on a daily basis over the past five days; the USD/CNY hit its highest level in over 8 years (lowest for the onshore Yuan); as of Friday, the PBOC has weakened the Yuan (via the reference rate) against the Dollar for eleventh trading days in a row, the longest time frame since June 2005. With an almost certain Fed rate hike in December, the Yuan will likely continue to bear downward pressure against its U.S. counterpart. Traders will also want to keep an eye on the guidance from China’s Central Bank: the regulator has allowed the Yuan float in response to market pressures and is less likely to guide the currency to go against the major trend with the FOMC meeting on the horizon; yet, the PBOC may guide the pace of Yuan moves against the Dollar while Chinese policymakers are dealing with side effects from the record-setting Dollar/Yuan rates.

Yuan’s onshore borrowing costs have been moving closely along with Dollar/Yuan rates since October. We discussed that a weaker Yuan reduces onshore Yuan supply through purchasing foreign currencies, and therefore, increases the funding costs of the onshore Yuan (and vice-versa). The overnight borrowing cost in Shanghai interbank market (SHIBOR O/N) began to pick up in the mid-October following the Dollar/Yuan rally. Despite that the Central Bank injected a net of 95.5 billion Yuan liquidity in the week of October 17th to 21st and a net of 595 billion Yuan in the week of October 24th to 28th, the tightened condition was not eased much. In the following week, as the Yuan pulled back against the Dollar, the SHIBOR O/N dropped as well. The benchmark rate fell to its lowest level in a month on November 9th when Donald Trump surprisingly took the win in the U.S. presidential election. However, as the Yuan resumed losses against the Dollar, the borrowing costs picked up again. Over the past week, the PBOC added a net of 425 billion Yuan cash into the interbank market but did not stop the rally in SHIBOR. Continued Yuan weakness may further dampen China’s domestic liquidity condition.

A weaker Yuan benefits Chinese exporters; at the same time, importers and companies holding large foreign debt have been suffering from the quickly falling Yuan rates. Since the beginning of October, the offshore Yuan has lost -3.44% against the Dollar. Although this is smaller than the 6.14% hike in the Dollar Index (DXY) over the same span of time, Yuan’s move is still significant to Chinese companies, most of which are used to less volatile exchange rates. China has been promoting a market-driven exchange rate regime, while it may take a while for market participants to get used to the new mechanism. Chinese regulators may take this into account when guides Yuan moves.

As a result, even though the Yuan will likely maintain its current downward trend against the Dollar ahead of the next Fed’s meeting, we want to look at both short and long setups for the Yuan as near-term retracements are possible for the above discussed reasons. For the short side of the Yuan, the USD/CNH is trading around 6.8990 on Friday, the next level to watch is 6.9354 (the 361.8% extension and the top of a parallel). For the long side of the Yuan, the level of 6.8538 (the 261.8% extension and the middle line of a parallel) is in the focus.