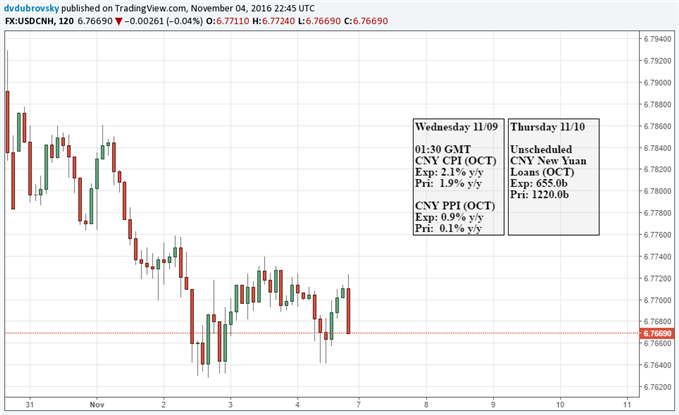 The Chinese Yuan launched a recovery this week, after it lost against the U.S. Dollar for four consecutive weeks. The USD/CNH found resistance along the top side of a parallel extending off the August high. As of 10:30 am ET, the offshore Yuan has erased last week’s losses, with the USD/CNH falling to below 6.77. The PBOC’s guidance supported the Yuan advance: the Yuan was strengthened by +0.51% against its U.S. counterpart in the reference rates this week. However, the Yuan’s rally is likely to be short-lived as the outlook of the Greenback is boosted after the Federal Reserve hinted at an upcoming rate hike in its November statement. Also, the U.S. labor market showed steady progress according to a report released on Friday, which helps to keep the Fed on track to raise interest rates in December. This does not mean a December rate hike is guaranteed: The U.S. presidential election on November 8th may largely impact Fed’s decision at the next meeting. On China’s side, a heavy calendar is dotted with foreign reserves, exports and imports, Consumer Price Index (CPI) prints for the month of October. These gauges could drive Yuan rates directly and may also weigh on China’s monetary policy in the coming periods.

In October, the Dollar strength led by Fed rate hike expectations and the improving U.S. economy has led Dollar/Yuan moves; Chinese policymakers have shown intention to promote a market-driven exchange rate regime by allowing Yuan pairs to move in response to market pressure. With an increased odds of a December Fed rate hike, the Chinese Yuan may continue to bear downward pressure against the U.S. Dollar, which means both the USD/CNH (offshore) and the USD/CNY (onshore) may head higher again after the pullback this week. Yet, a shock from the U.S. presidential election may reverse the upward trend for the Dollar. As our Currency Strategist Christopher Vecchio discussed earlier, the Fed will likely take into account the fiscal policy of the president-elect when decides its monetary policy: in the event that Donald Trump were to be elected, the Fed would keep rates on hold in December. In turn, the Yuan would strengthen against the Dollar as the latter loses its primary near-term support.

Event risks from home are expected to add volatility to Yuan rates as well. China’ foreign reverses, exports and CPI reads for October are the top indicators to keep an eye on. In September, China’s foreign reserves dropped -$18 billion to $3.166 trillion, the lowest level since May 2011. If the holdings continue to fall, China’s Central Bank is less likely to support the Yuan when it devalues against the Dollar as this will further burn foreign reserves. Also, China’s overseas shipments in Dollar terms unexpectedly shrank -10% in September. A weaker Yuan may have helped to ease the pressure on exporters: The Yuan lost -1.57% onshore and -1.58% offshore in October. In terms of the headline inflation, multiple Chinese financial institutions forecast that the CPI will rise back to above 2% in October. A higher CPI may reduce the odds of the PBOC introducing further easing measures, and thus, may support Yuan rates.