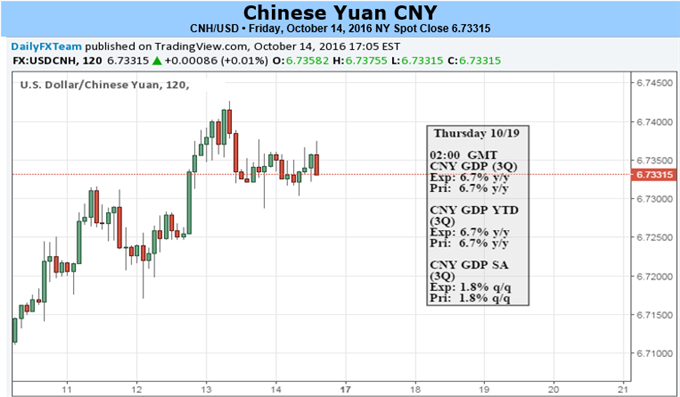 The offshore Yuan dipped the lowest level in 9-month, with the USD/CNH climbing above 6.74 on Thursday. The onshore Yuan fell to the lowest level since September 2010, with the USD/CNY touching 6.7312. The PBOC set the Yuan fix above the key psychological level of 6.70 this week, the first time in six years. As of 10am EDT on Friday, the offshore Yuan has lost -0.41% against its U.S. counterpart and the onshore Yuan has dropped -0.83%. Next week, China will release the third quarter Gross Domestic Product (GDP) print, a primary driver for Yuan rates. Other key gauges from home include industrial production, retail sales and fixed assets investment. The U.S. will release the September Consumer Price Index (CPI), industrial production, as well as housing and labor data. The heavy calendar is expected to bring elevated volatility to Dollar/Yuan pairs. Also, the PBOC’s guidance on the Yuan and short-term liquidity injections are worth to continue to watch, as these moves may give out clues on the next ‘read line’ for Yuan rates from the regulator’s point of view.

The primary driver for Yuan rates, China’s growth in the third quarter, is likely to remain steady at 6.7% as what was seen in the first half of 2016; there is a small chance that the growth may improve slightly to 6.8%. Let’s take a look at the Keqiang Index first, which is a leading indicator originally used by China’s Premier Li Keqiang to get a more accurate picture of the broader economy. The Keqiang Index was 4.04, 4.44 and 5.58 from April to June and increased to 7.34 and 9.00 in July and August (the September print is not available yet). Three components are included in the indicator: railway cargo volume, electricity consumption and new loans issued by banks.

In specific, declines in railway cargo volume have been narrowing from the second quarter to the third quarter. The railway freight volume expanded +1.0% in September, the first increase in 32 months. The growth in electricity consumption have increased significantly in July and August to levels above 8.0% from below 3.0% in April to June; the September read is not issued yet but the average growth in the third quarter is highly likely to exceed the average in the second quarter. The New Yuan Loans component, however, has been on a bumpy ride since January and could be the one that drag down the aggregate indicator in the third quarter. More importantly, home loans have become the sole driver to new lending in July and August, which may not be sustainable amid tightened regulations from the Chinese authority. Overall, two scenarios for the three components in the indicator in the third quarter are mostly likely: A) increase, increase and increase; and B) increase, increase and decrease.

Other major Chinese gauges sent out mixed messages: China’s exports in September plunged -10.0% in Dollar terms, the sharpest drop since March. At the same time, China’s consumer price growth reached a four-month high in September and the producer price index walked out of the deflationary territory, the first time since March 2012. On Tuesday, China’s Premier Li Keqiang expressed optimism over the economic performance: “the economy in the third quarter not only extended growth momentum in the first half of 2016 but also showed positive changes in factory output, company profits and private investment; also, the unemployment rate in 31 big cities in a survey dropped below 5%.” Premier Li added that “debt risks are under control”, though credit risks have seen increases of recent. The soaring housing prices increased the risk of property assets bubbles as well. Thus, China may show steady growth or even some improvements in the third quarter; yet, the economy still has considerable uncertainties amid various internal risks and additional production cuts set to be achieved by the end of this year. For Yuan rates, a stable or improved GDP print may help to reduce some downward pressure seen recently.

The PBOC’s guidance on the Yuan will continue to be in focus. Yuan’s daily fix was weakened by the regulator for four consecutive days until Friday after a week-long hiatus due to Chinese holidays, or seven trading days in a row. Since the offshore Yuan was introduced in 2010, there are only four periods that the USD/CNH touched above 6.71: August to September 2010, January 2016, July 2016 and now, which provide limited references for Yuan’s further moves. For the onshore Yuan, the last time it traded above 6.71 was six years ago, with even fewer references. Within such a context, traders will want to keep a close eye on Yuan’s guidance from China’s Central Bank, as it may largely impact the onshore and offshore Yuan rates.