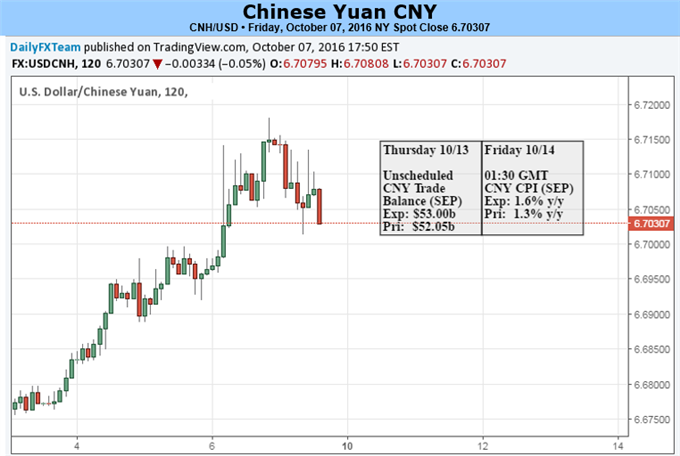 The offshore Yuan (USD/CNH) broke the psychological level of 6.70 in the first trading week as a global reserve currency, while Chinese onshore markets were closed and no Yuan fix was issued by the PBOC. The offshore Yuan pair touched 6.7182 on Friday, the weakest level for the Yuan in 9 months. The spread between offshore and onshore Yuan rates has widened to more than 400 pips. However, whether the pair can hold above the key level of 6.70 could be largely impacted by moves from the Central Bank after onshore markets reopen. Traders will want to keep a close eye on two indicators for clues on the Central Bank’s intention: A) Yuan’s daily reference rate, and B) the onshore and offshore borrowing costs for the Yuan, SHIBOR and HIBOR. Also, heavy Chinese data will likely generate elevated volatility in Yuan pairs: the calendar is dotted with money supply, lending, financing, trade (all without specific time for released) as well as precisely timed September Consumer Price Index.

In July, both the offshore USD/CNH and onshore USD/CNY broke above 6.70; however, the daily reference rate set by the PBOC remained below the key level, indicating that the Central Bank did not confirm such a breakout. Following the guidance, both Yuan rates pulled back below 6.70 and traded within a range over the following two months. Therefore, despite the fact that the offshore Dollar/Yuan has climbed above the key resistance once again, the pair will still need a confirmation from the Central Bank in the effort to maintain above the key threshold. A daily fix that is larger than 6.70 may signal a real bullish trend for the Dollar/Yuan, which will be bearish for the Yuan.

At the same time, China’s foreign reserves dropped to $3.166 trillion in September, the lowest level since May 2011, according to a report released by the PBOC on Friday. This is the third consecutive decline in China’s foreign-currency holdings, indicating that the country still faces considerable capital-outflow pressure. Within such context, if the regulator wants to support Yuan rates, it may need to further burn foreign reverses, and this could be a tough call.

The regulator may have other concerns as well: the Chinese currency has just officially joined the SDR basket a week ago, with the third largest weighting of 10.92% in the exclusive league. Steadied guidance on Yuan rates were seen before the official inclusion, hinting that a stable Yuan may be preferable around this highly-anticipated moment for China. However, the Yuan has weakened -0.59% against the U.S. Dollar in the first week after its SDR entry (as of 12pm on Friday), the largest weekly loss since June. Also, China’s domestic housing prices were soaring over the past few weeks, increasing the risk of price bubbles. A weakened Yuan may further stimulus home purchases as property is generally considered as safe-haven assets by Chinese investors. During the week-long holiday, multiple Chinese local governments have launched restrictions on home purchases in the effort of cooling the overheated housing market.

Next week, China will release money supply and New Yuan loans prints for September, which may give out more clues on the risk of housing price bubbles. So far, home loans have become the sole driver to new lending: They took up 71.2% of all loans in August and 98.2% in July. This means that an incredible high amount of cash has flown into the real estate sector. Investment in other sectors, on the other hand, remained low, resulting a huge gap between the growth in M1 and M2. Next Thursday, China will release the September Consumer Price Index read, which is expected to increase to 1.6% from 1.3% in the month prior, according to a consensus forecast from Bloomberg. These levels are distant from the target rate of 3.0%. However, amid the increasing risk in property market, China’s Central Bank are likely to be restrained to introduce additional easing measures to support the economy.