Monetary policy regimes are meant to change, and change they are for the world’s largest and most influential central banks. Generally, the Federal Reserve is on one side of the policy spectrum with a persistent vow to tighten monetary policy time in the indeterminate future. Compared to the US group’s ‘hawkish’ lean, the European Central Bank (ECB) and Bank of Japan (BoJ) are firmly planted at the dovish end of the scale. Both are sporting a negative rate on certain deposits and pursing large scale asset purchase (QE) programs with other unorthodox programs further baking up the core easing. These standings have fed enormous trends over the years, but recent months have seen moderation in the exchange rate and equity market response. Yet, the drive is not over; and reinvigorated trend will not necessarily result in a revival of the previous bearings. 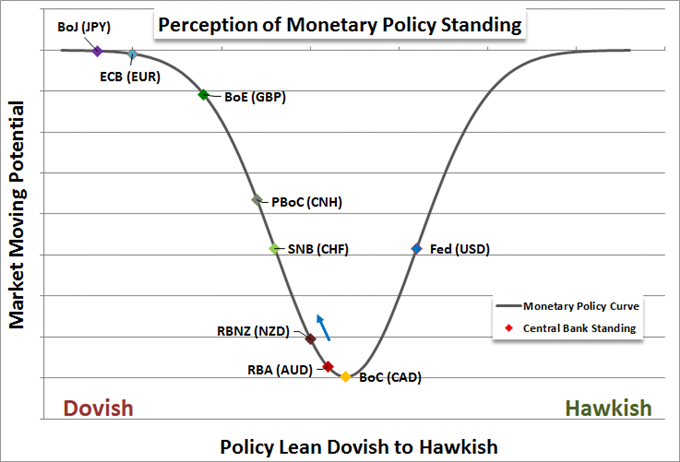 Will the Fed Lose its Hawkish Luster Fast Enough to Sink the Dollar?

The most recognizable change in perceived monetary policy amongst the big three central banks is seen with the Fed. After the rate hike this past December, speculation has continued to feed debate amongst generally skeptical speculators and frustration amongst central bankers trying to dampen any shocks that could arise with further tightening. With only two Fed meetings left this year, the chance of a hike likely rests solely with the December 14 meeting.

While a number of the most hawkish rank on the Fed board have voiced confidence, note the market-based side effects of overly accommodative monetary policy and even suggested that the prudent move would be backing away from extreme accommodation; reticence remains the primary course. For a November move, the proximity to the US Presidential Election represents a tangible uncertainty that seems unreasonable to trigger with a poor market reaction to monetary policy. While a rate hike by year’s end is likely amid growing acknowledgment of the risks associated to extreme accommodation, any meaningful trouble in the global markets would quickly scuttle the central bank’s plans. That can leave the Dollar spinning its tires…at least when it comes to monetary policy as a driver.

Over the past session, a remarkable move developed for USD/JPY: it broke the upper boundary of a descending trend channel nearly a year in the making. This is remarkable for a few reasons. First, the Dollar itself wasn’t projecting the type of strength that was clearing major technical levels across its major pairs. Furthermore, the risk connection from the Yen crosses showed little tailwind from other sentiment-motivated asset classes. Yet, it is the general situation where breakouts and trends are heavily outweighed by congestion that truly makes this an unusual state of affairs. 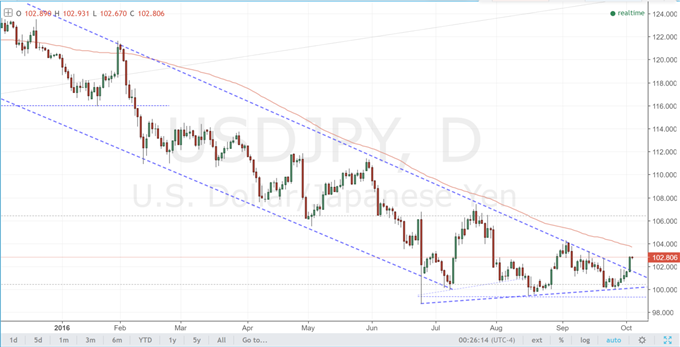 A significant factor in this crucial technical break is the traction afforded to the rumor that the BoJ is contemplating expanding its unorthodox policy even further to help garner the influence they so crave. According to unnamed officials with knowledge of the discussions, it has been suggested that the Japanese authority is considering purchases of foreign bonds. While it was softly endorsed by a former US Treasury Secretary and Abe economic advisor, it was suggested that this would only be effective if not targeted at manipulating the exchange rate. However, that is exactly where it would have the greatest impact.

Purchases of foreign bonds would be a considerable FX transfer that pressures the Japanese Yen lower – though it will also fight other forces. A cheaper currency is a boon to the trade economy, but policymakers have vowed that it is not a target in their efforts. That rings hollow considering they stated such intentions explicitly before and later backtracked. The true wrench in the effort this time around is not whether the BoJ has nefarious intentions, but the market’s diminishing belief in the central banks’ influence. This break will struggle against a market of consolidation unless the BoJ substantiates the foreign bond buy rumor or risk trends mount a non-related support. 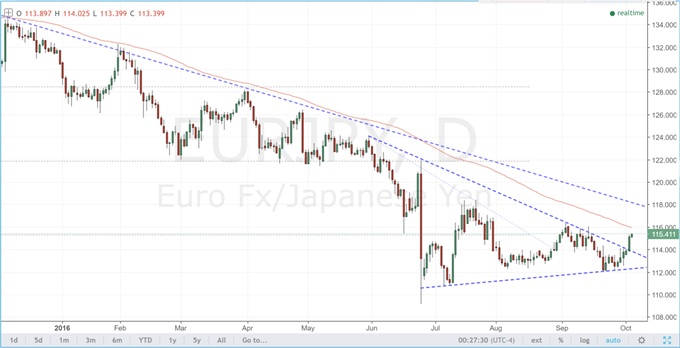 Among the Yen crosses, only two prominent players truly supplied exceptional breaks: USD/JPY and EUR/JPY. Most others were holding true to their boundaries. For the former, that may owe to the Fed’s still-wide contrast. For the latter, the motivation may be the Euro’s own strength. Back in 2013, risk assets started to struggle and the Dollar started to dig in. At the time, the Fed started to warm the market to its plans to eventually ease up on the stimulus throttle; and the market feared the end of an era of cheap money and low volatility – even if very early in that anticipation. The resultant market response was coined the ‘Taper Tantrum’. While that was Fed specific at the time; eventually, today’s most aggressive stimulus programs will have to follow a similar course. And, early speculation is suggesting the ECB may be on that course.

Similar to the BoJ story, unnamed sources fed testimony to the financial media that European central bankers were building towards a consensus for tapering when the time came for exiting their expansive program. As is, the ECB is scheduled to push QE to March 2017 and has the option to extend it out to September of the same year. A back off is inevitable, but the reality can still have a remarkably abrupt impact on the market. Here too, the drive for the Euro is dubious. We still have months of large asset purchases ahead, and it is not clear that the market is willing to fear so distant a future – just yet. Yet, where EUR/USD may not offer a clear bearing; the diverging efforts between the ECB and BoJ may present a EUR/JJPY motivation.

The Net Influence on the Financial System and Markets

Between the questionable hawkish bearing of the Fed, the uneven dovish drive for the ECB and the supposed intensification (arguably a dive into desperation) of BoJ accommodation; it is important to keep tabs on the systemic influence of monetary policy. There is considerable debate over the efficacy of monetary policy for achieving economic objectives and even unspoken market influence. However, there is still a distortion on the system. A universal and warping influence of monetary policy has carried serious weight in evaluating the value of money and fiat assets. When all the major currencies are undermined by accommodation, Gold – a primary alternative-to-traditional-paper-money asset – has benefit.

And yet, between the more dovish speculations surrounding the BoJ, the questionable conviction of the Fed and the ECB’s flirtation with the eventual end of its easing program; we have seen gold produce its biggest single-day drop in over a year. It seems the Dollar remains a viable reserve in bleak and low-yield times and the Euro may soon offer a second option. 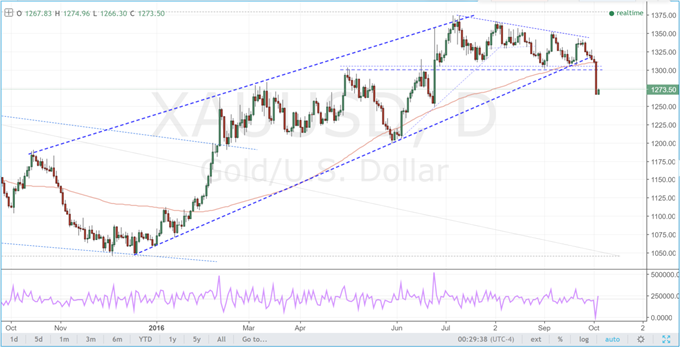 Another crucial facet of monetary policy and its net influence over the entire financial and economic system is the contribution to risk trends. Collective monetary policy has helped curb volatility and encourage a reach for yield into riskier assets (I would argue out of necessity). Below we see the world’s largest central bank stimulus efforts aggregated and overlaid with the VIX volatility index. If easy monetary policy is either deemed to be losing its effectiveness or naturally ebbing, the signal to the market may be that investors are on their own in shouldering their lofty risks. 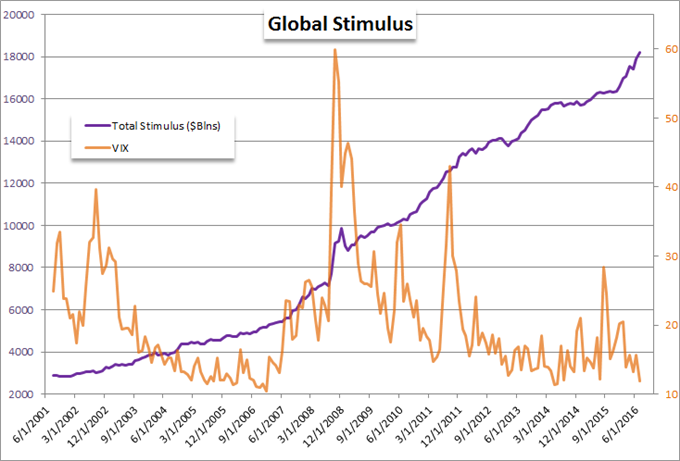 The effectiveness of monetary policy has been a common theme in the markets and academic circles, and it calls into question keeping an ineffective effort in place to generate greater cost on increasingly marginal benefit. However, pulling back is not so easy. While the economic charge and full price pressures never showed up with the stimulus drive, asset inflation certainly did. Now there is considerable risk of sinking asset prices in a withdrawal and subsequently swamping a lackluster pace of growth. 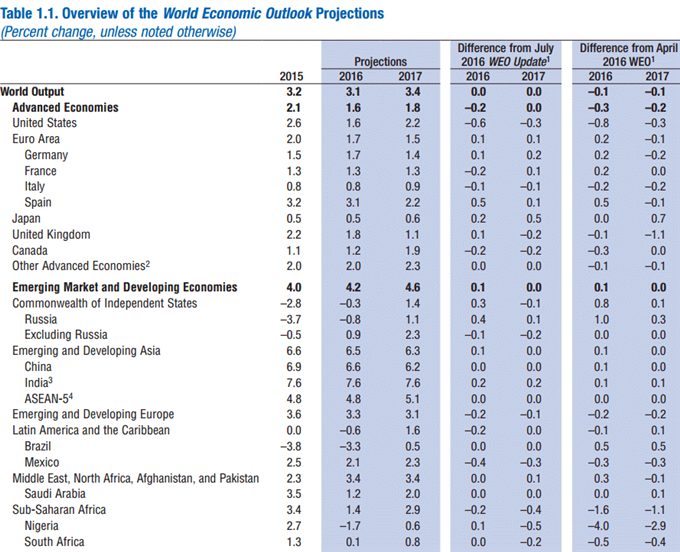 The IMF recently released its WEO (World Economic Outlook) update, and the growth forecast was far from encouraging. Muddle-through expansion for the advanced world threatened hitting the skids with any unfavorable development, and there are plenty of those on hand. Brexit fallout; a China hardlanding; global banking problems and a laundry list of other issues present a clear and present danger to this tepid backdrop. One risk that should be given explicit attention and mentioned outright is the rising threat of isolationism and protectionism which is targeted at tariffs that would idealistically help those countries that employ them but practically result in a universal economic loss. Watch for the IMF’s Global Financial Stability Report due today and important as well as insightful speeches scheduled through the end of the week. 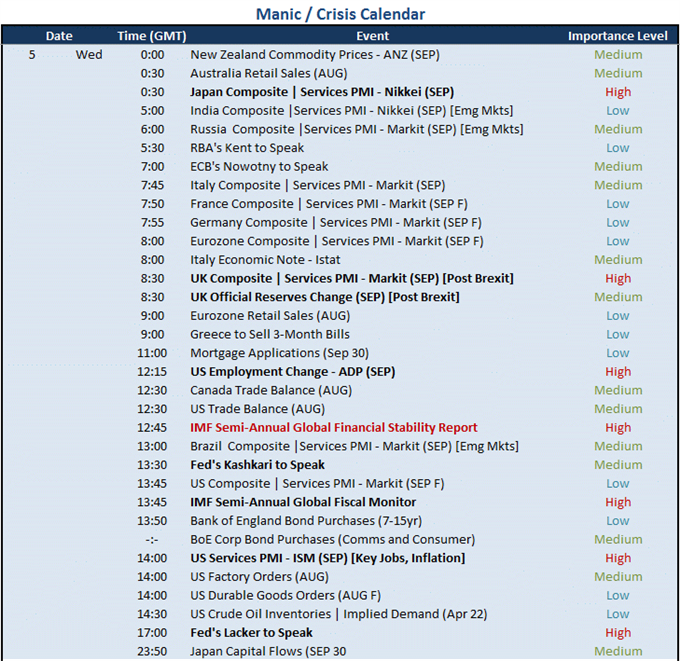