From Complacency to Chaos?

The previous quarter marked one of the most extreme periods of inactivity for the global markets in decades. Despite the narrow ranges for exchange rates and asset prices, however, the fundamental tension continued to build beneath the surface. Complacency and restraint will likely be replaced with volatility and capital redistribution. There are eddies in this capital flow that can certainly weigh the US Dollar, but the most extreme currents present a significant boon to the Greenback. While there are many critical fundamental events ahead that will motivate the world’s largest currency, there are certain ignition points which should be paid particular attention by currency traders.

The US Presidential election has and will dominate the news cycle – from mainstream to financial. While the election of the leader to the ‘free world’ is certainly important from a local and international perspective, its impact on the market is too often exaggerated. The economic impact of Democrat versus Republican leadership is murky enough that it provides economists endless opportunities to use academic esoterica to argue their competing views. Practically, in the months following the past 10 US presidential elections, the S&P 500 had rose in eight of the cycles with an even mix of Republican and Democrat outcomes. In terms of consumer sentiment however, confidence faded in the year after the vote – again with even party distribution (see below). 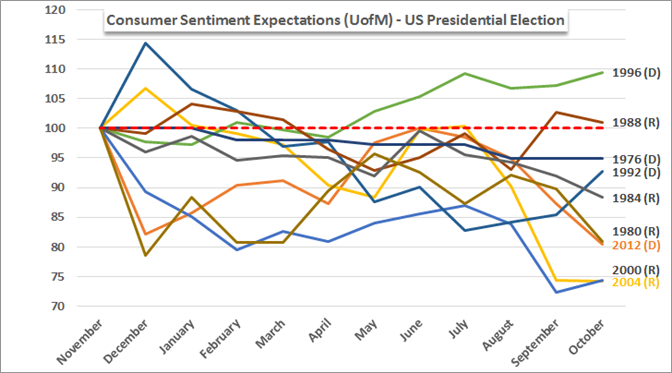 Where the US election will have its greatest influence over the financial system is in the animosity and fear of the electorate towards the opposing candidate. Each side believes the election of the opposition will steer the US economy into a tailspin. While unlikely to be the case, the fear can manifest in very important ways economically and financially. Fear that stagnation or even recession is ahead can lead consumers to restrain spending, businesses to curb expansion plans and investors to withdrawal capital. That can hasten a moderation of economic activity that has already sowed doubt.

The Economics of Returns

One of the most important – and yet underappreciated – fundamental struts for the Dollar over the past years is its economic strength relative to the rest of the world. While hardly comparable to the eras of rapid expansion during the housing boom through 2007 or the technology swell through 1999, the pace of growth has held out to be robust. And, paired with the turn towards normalizing monetary policy (higher rates) well before its counterparts, there is both a sense of safety and yield associated to the US Dollar. If the US election undermines that perception of economic stability, it can be a crucial loss of fundamental strength.

As for the promise of higher returns moving forwards, the Fed’s course towards a second rate hike is a delicate one. It is very unlikely that the central bank would consider lifting rates in November as it falls days before the election. While the central bank almost certainly avoids political favor or agenda, it cannot remain oblivious to the fallout from a falter in sentiment. The uncertainty around the event could stir tension in an unfavorable way. A December hike is far more likely; yet if consumer and investor sentiment is sliding heading into the meeting, a data-dependent Fed will defer. In turn, there is premium for the Greenback to lose – though that alone is unlikely to turn the tides on five years of gains.

The greatest fundamental contingency facing the market going forward is the faltering of sentiment that has been founded on intangible and temporary moorings. Monetary policy has played a key role in this buildup for risk oriented assets, but the lower volatility comes with record low natural returns. This has forced a speculative reach among market participants to merely keep pace. That exposure – and dependency – has grown to dangerous levels and even the most optimistic investors are fretting what lies ahead. Whether the election plays a part in this sentiment collapse or not, it is in the future. In such an eventuality, the Fed’s hawkish plans will be scuttled; but it reverts to a more elemental position – safe haven. When the market is scrambling for safety, there is no second guessing the Greenback’s stability. 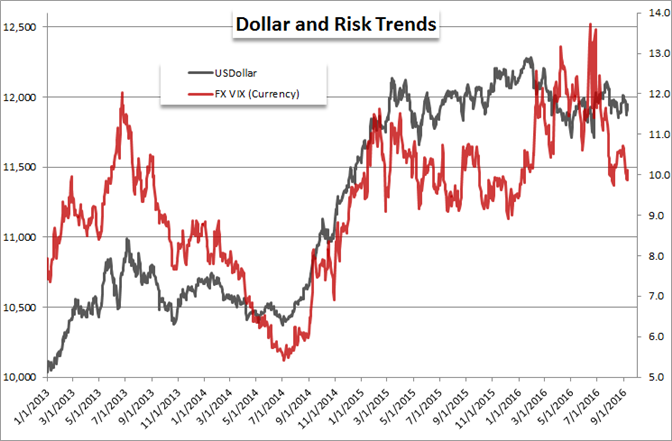 The rally from 2008 does comprise 7 waves and the USD has run into a ceiling that relates to the line that connects the 1980, 1992, and 2008 lows. Parallels extended from significant highs identify support/resistance and often major inflection points with precision. Divergence with EURUSD at turns is often a hallmark of an important behavior change as well. The progression of prices and relationship between EURUSD and the USD Index recalls the turning process in 2000-2001. Specifically, EURUSD topped first and the USD Index squeezed out a final high 9 months later to put the finishing touches on its ascent.

The decline from December 2015 to May 2016 consists of 5 waves. The decline is classified as a diagonal due to waves 2 and 4 overlapping. The rally from the May low is in 3 waves (most of wave C is Brexit), which reinforces the idea that the broader trend is now lower (3 wave movements are considered countertrend). Each rally since August has failed at or just below the 200 day average, which is now downward sloping. Trading focus is lower as long as the index is below the December-January trendline. Expect weakness to accelerate in the event of a drop below the parallel that extends off of the March 2015 high (this line was support in August). Strength above the July high at 97.56 would at least delay the bearish call.