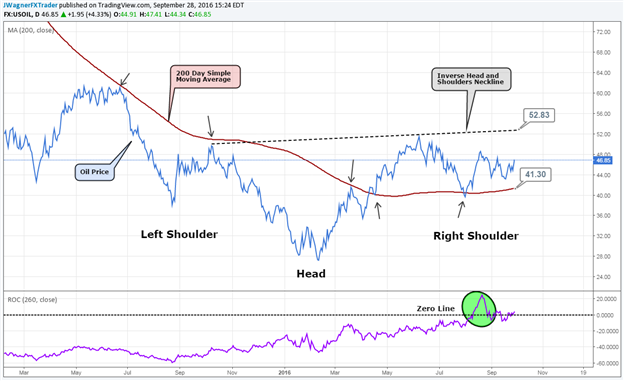 The Oil Market failed to follow through to the upside last forward and carry forward what was an impressive rebound in Q2 that saw the price rise from the February 11 low of $26.03/bbl to a high of $50.91/bbl in June. Since the high price was hit, the price of Oil has moved sideways, and there are a handful of fundamental stories that explain why the sideways move could continue or a possible breakdown could arise.

However, an 11th hour deal in Algiers does provide hope that may align with the technical developments occurring in WTI Crude Oil.

The key point to lead off is whether or not global demand can provide enough buyers for the aggressive supply on the market. Demand has failed to excite Oil bulls to any significant degree in Q3 2017, and a recent report from the IEA said that we could see oversupply well into late 2017.

Oversupply is a significant problem that many hope the OPEC agreement in Algiers will see rectified. The cartel agreed on September 28 to lower production by 700k barrels a day, which resulted in an immediate spike of ~6% in a reversal of the pump-at-will policy that OPEC passed in 2014.

We could see a continuation of the move higher on the Oil cut agreement as institutional speculators have built up a large short position that may need to unwind if the price pushes higher. Recent data showed put positions (a bearish option position) in late September was at their highest levels since September 2015 right before the price of WTI Crude Oil fell from the mid-$40/bbl range toward the upper $20/bbl. Naturally, these traders were not expecting OPEC to agree on an output limit in Algiers.

The agreement may also help put worries aside for those worrying about the oversupply glut. Put simply; the supply side has seemed overbearing as demand could continue to fall. Another discouraging development in late Q3 was the World Trade Organization (WTO) reducing their Global GDP forecast to 1.7%. The lowered forecast exposes the financial stress that is facing Oil producers such as Saudi Arabia, Iran, Venezuela, and private US producers to name a few. Iran is facing a presidential election, Saudi Arabia injected $5B+ into local banks to stabilize them, and Venezuela has had a sharp downturn, and many US private producers seem to be barely holding on with their debt-laden balance sheets. All of these components lend to argue for further or worse oversupply conditions than at present even with the recent Algiers deal.

Another key aspect that we continue to watch, which doesn’t get as much attention is the direction of the US Dollar. There was little coincidence that the US Dollar Bull Market took off in July 2014, which was subsequently the last time the price for a barrel of WTI Crude was above $100. Going back to the peak of the 2014/2015 bull market in the US Dollar, the USD currently sits at the lower third of its price range dating back to March 2014. However, the direction of the Dollar Index (DXY) should be worth watching as another short toward the top of its recent range at 100 would likely put considerable pressure on the price of Oil in addition to the oversupply concerns mentioned above, and the institutional selling pressure that is building.

While there is hope at the start of Q4 that the worst is behind us regarding low prices, the market will look for demand to catch up to the hopefully falling supply in the Oil market.

If you wipe the name off the chart and analyze solely the technical picture, crude oil price appears to have some wind to its sails. The key level to watch is the 200 day simple moving average, which is a commonly used trend indicator.

Additionally, bulls may identify the potential inverse head and shoulders pattern. This is a bullish pattern that would be activated on a break above the neckline near $53. A successful break above $53 has a higher probability chance of continuing to the next level of resistance near $62. A common target for H&S patterns is adding the distance of the head to the neckline (~$24) to the point of break out ($53). The technical pattern offers an eventual target of $77.

Crude oil price has reacted cleanly to the 200 day simple moving average for the past year and a half offering 5 touches of price support and resistance. Therefore, a move below the common trend indicator would be worrisome to the H&S pattern traders. A break below would open the door to more bearish potential towards $40 and then possibly $35.