The long-term outlook for the British Pound remains tilted to the downside as the U.K. remains on course to depart from the European Union (EU), but the bearish sentiment surrounding the sterling may abate over the remainder of the year as the Bank of England (BoE) endorses a wait-and-see approach for monetary policy.

The economic outlook for the U.K. remains clouded with high uncertainty as the new government under Prime Minister Theresa May appears to have full intention in invoking Article 50 of the Lisbon treaty, and the future negotiations are likely to be closely watched by market participants as the U.K. runs a Balance of Payments (BoP) deficit and remains reliant on international financing. With that said, widening imbalances accompanied by the growing threat for a recession may put increased pressure on the BoE to further support the real economy, and the Monetary Policy Committee (MPC) looks poised to implement additional monetary support as officials warn ‘a majority of members expect to support a further cut in Bank Rate to its effective lower bound.’

BoE Governor Mark Carney and Co. may deliver another rate-cut before the end of the year as the committee ‘judged that the UK economy was likely to see little growth in the second half of 2016,’ but the central bank may show a greater willingness to further embark on its easing cycle in 2017 as officials see a growing risk of overshooting the 2% target for inflation. After retaining the status quo at the September 15 policy meeting, it seems as though the BoE will stick to a wait-and-see approach at the next rate-decision on October 13 as board member Kristin Forbesargues the ‘initial effect on the UK economy of the referendum has been less stormy than many expected’ and contends that central bank officials are ‘not yet convinced that additional monetary easing will be necessary to support the economy.’ As a result, the MPC may continue to prepare households and businesses for lower borrowing-costs, but the sterling may face limited losses over the remainder of the year especially as Governor Carney rules out a zero-interest rate policy (ZIRP) for the U.K.

It seems though the BoE remains in no rush to implement additional support after delivering the meaning easing package (fresh record-low interest rate, a new Term Funding Scheme, GBP 10B in corporate-bond purchases along with an addition GBP 60B in government-bond purchases) in August, and the sterling may stage a larger correction over the coming months should the BoE continue to tame market expectations for an imminent rate-cut. 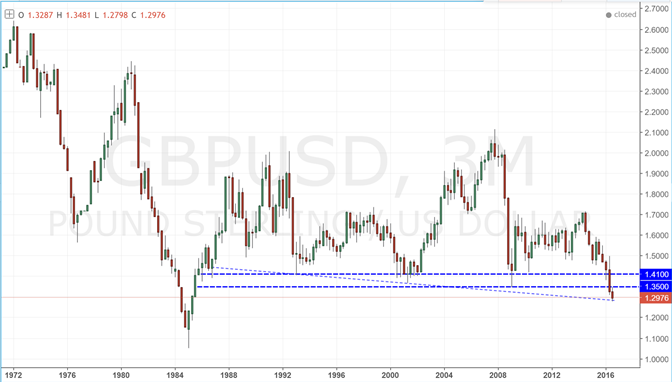 You cannot properly grasp the technical position that the GBP/USD is in unless you look at a much higher time frame chart. Above is the quarterly chart of the Cable, and the critical levels finally come into view. First and foremost, we realize that the post-Brexit collapse back in late June drove the pair to its lowest level in in three decades. The range/zone of support the market cleared was significant with many tests and successful rejections, and there is typically strong influence behind such a momentous development. What’s more, there is historical precedence for further declines down to nearly 1.0500 should bears require milestones to bolster conviction. Oftentimes, trading to new records (highs or lows) curbs conviction with the speculative ranks relying on extension and projection analysis which fewer subscribe to. Yet, despite the break and the guidelines, it would be a difficult bearish extension. The path of least resistance would entail retracing a portion or all of the large (2,200 pip) range that the UK Referendum created in the span of weeks. 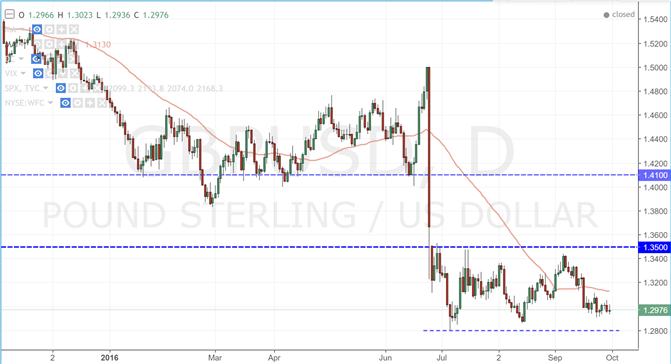 From the Daily chart, we can see the technical landscape more clearly. The first set of crucial technical levels carved out through the previous quarter are 1.3500 resistance and 1.2800 support. These boundaries were set early and were not retested through the subsequent months – in other words the market was contracting. Dwindling consolidation was the primary feature of the Dollar-based majors and for the broader financial markets through the inordinately quiet third quarter. In turn, GBP/USD will likely succumb to changing winds that force major breakouts and trend development. A break below 1.2800 would likely be met with chop and struggle for progress. In contrast, an earnest break above 1.3500 will more readily find momentum towards 1.4750 and perhaps as high as the 1.5000 pre-Brexit spike.