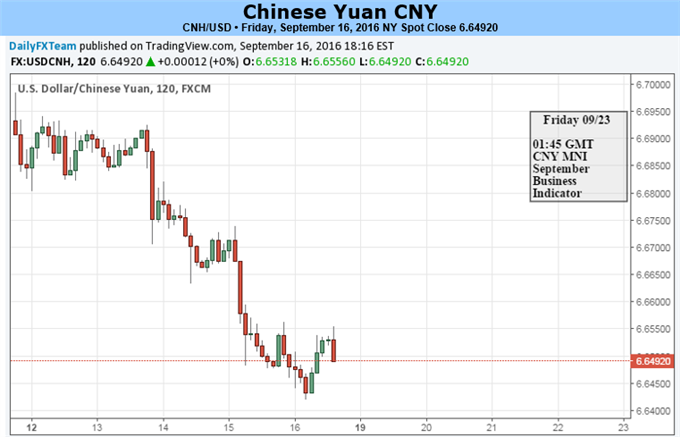 Yuan Rates at a Crossroads Ahead of FOMC

The offshore Yuan touched the strongest level in three weeks despite no Yuan reference rate was issued by the PBOC beginning on Thursday, due to a 3-day national holiday. This week, the overnight borrowing cost of the offshore Yuan soared to 7-month high in Hong Kong, Yuan’s largest offshore market, indicating a lack of liquidity in the Chinese currency. Looking forward, Federal Reserve’s rate decision to be released on September 21st will be a key event in focus for the Dollar/Yuan, as it may determine whether the pair could break above the upper bound of 6.70. Yuan’s liquidity in the offshore market and the Central Bank’s guidance could set the lower bound for the USD/CNH. With mixed internal and external forces, Yuan rates is expected to brace for elevated volatility.

As a major driver for the USD/CNH, discussions on Fed rate hikes this week failed to spike the pair higher. Comments from Fed voting member Brainard on Monday turned out to be dovish; Fed’s Lockhart and Kashkari brought limited impact to the Dollar/Yuan as they are non-voting members. On Friday, the August U.S. Consumer Price Index came in stronger than expected, but still,likely not enough to trigger immediate Fed action: The odds of a Fed rate hike next week remained low following the release of the print, withFed Funds markets only pricing in a 20% chance.It appears thatthe marginal utility of Fed rate hike fears has been diminishing, despite the fact that Fed’s monetary policy is still the key driver to the Dollar/Yuan. Therefore, in order to break above the key resistance of 6.70, the USD/CNH would need a more hawkish tone from the Fed, which traders may find clues for in the FOMC minutes.

On the other hand, the Chinese Yuan showed strength driven by tightened liquidity in the major offshore market. The USD/CNH broke below the support of 6.6650 that it held for the past three weeks, after the overnight borrowing cost of Yuan in Hong Kong jumped from 2.84% to 8.16% on Wednesday, the highest level since February. The Yuan’s liquidity remained tight with a still-high HIBOR O/N of 7.95% on Thursday before the major Yuan offshore market entered a 3-day holiday. There are various theories to explain this liquidity shortage. Amid the tightened condition, the offshore Yuan continued to strengthen on Friday, with the USD/CNH falling below 6.6555, the strongest level guided by the PBOC through daily fix in September.

Next week, traders will want to watch two indicators for clues of the lower bound of the USD/CNH: A) The PBOC’s guidance – the last Yuan fix issued by the PBOC before the holiday was 6.6726. The USD/CNH has already traded below this level. Yuan’s reference rate set after the reopen of onshore markets could tell us whether the Central Bank confirms this Yuan strength. B) HIBOR rates: tightened Yuan liquidity will increase the cost of shorting the Yuan and thus could hold the USD/CNH at low levels. The average level of HIBOR O/N in August was 1.41% and the average over the past 12 months was 2.56%. If the HIBOR read on next Monday is still significantly higher than these levels, it may indicate uneased condition in offshore and a stronger Yuan.