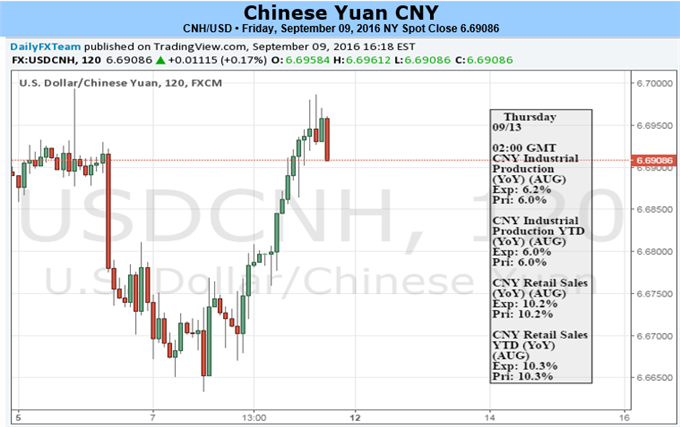 The volatility in Yuan rates elevated this week: the USD/CNH broke the support of 6.6832 that was held last week and found new support around 6.6650. In terms of the upper band, the pair rose towards the psychological level of 6.7000 once again on Friday. After the G-20 meetings ended last weekend, market speculation on a weaker Yuan has heated up. However, moves from the PBOC past week signals a different tone. Yuan’s daily fix set by the Central Bank over the past five days were at or below 6.6684, which is a level distant from the key psychological level. Also, Yuan’s overnight borrowing rate in Hong Kong soared on Thursday, hitting the highest level since late February; the short-term borrowing rate remained elevated on Friday. The tightened Yuan liquidity in the offshore market has increased the cost of shorting the Chinese currency, adding obstacles for the USD/CNH to crack above the 6.7000 level.

A driver may lead to a sustainable breakout above such level is an increased odds of Fed rate hikes in the near-term. The outlook on Fed rate hike has contributed to the largest moves in Dollar/Yuan of recent: the USD/CNH broke below 6.6832 on the past Tuesday, following a weaker-than-expected U.S. August ISM Non-Manufacturing print that reduced the odds of Fed rate hike in September. In the coming week, the U.S. will release heavy data including Advance Retail Sales, Jobless Claims, Existing Home Sales, and Consumer Price Index for August. If these prints come in better-than-expected, the probability of Fed rate hikes may rise again and then boost the Dollar. Also, the major U.S. data will be announced on September 15th (Thursday) and 16th (Friday), when Chinese onshore markets will be closed for a national holiday. This may give the offshore Yuan additional flexibility as the PBOC will not issue the daily fix on those days.

At the same time, PBOC’s moves will remain worth to watch for Yuan pairs. Traders want to keep in mind that the daily fix is only one tool that the Central Bank can guide the market. The regulator may still intervene the market through other tools despite the close of the onshore market. The USD/CNH may test the key resistance level of 6.7000 again, but a confirmation from the PBOC through the daily fix later will still be needed for the pair to hold above this level. Also, Hong Kong’s financial markets will be closed for the same holiday on September 16th (Friday). As the largest offshore Yuan center, the Friday close in Hong Kong may significantly reduce the trading volume of offshore Yuan pairs. Traders will want to be aware of a potential thin market on Friday.

In terms of even risks from China’s side, Industrial Production, Retail Sales and fixed Assets reads will be released on Monday. These prints may have limited direct impact to Yuan pairs but could give us a broader picture of the economy; Chinese regulators may also adjust monetary and fiscal policies accordingly. One of the key indicator to watch is China’s fixed assets investment: the growth has dropped to 8.1% in July, the lowest level in sixteen years. The August print could give us some clues on whether investment condition has reached the bottom.-RM