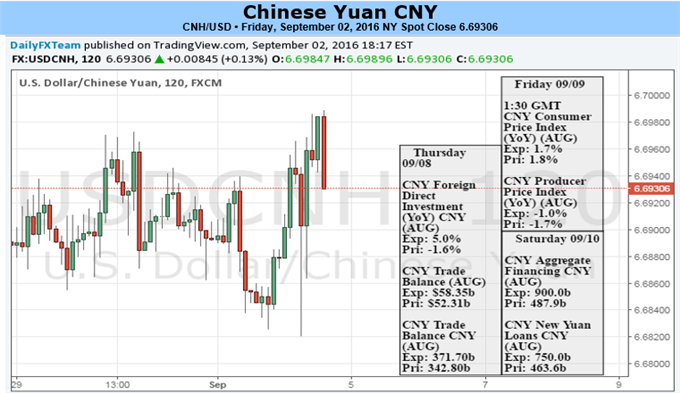 The USD/CNH held above 6.6832 as support despite a weaker-than-expected U.S. August Non-Farm Payrolls print released on Friday. In terms of the upper band, the pair touched 6.7026 on Monday, the highest level in over a month, but failed to hold above the key resistance of 6.7000. Looking into the coming week, event risk from China will be key drivers to Yuan rates. One major theme is the on-goingG-20 meetings. China’s top regulators including the PBOC’s governors have already begun to address the country’s policies at the meetings. Also, the Chinese President Xi Jinping is scheduled to deliver a keynote speech at the G-20 Leaders Summit, which may give more clues on the outlook of the broader economy. With additional remarks from G-20 finance ministers, central bank governors and presidents, the volatility in FX markets is expected to elevate. Next week, China will have a heavy economic calendar as well with foreign reserves, exports and imports, consumer price index, monetary supply and new Yuan loans reported for the month of August.

In regards to the question that many traders want to ask - ‘whether China’s Central Bank would consider intervention if large volatility in Yuan rates is seen’, the Deputy Governor of the PBOC Yi Gang offered a response at one G-20 session. Mr. Yi said that “we will surely use multiple policy tools [to intervene] if abnormal moves in exchange rates are seen. We want to keep Yuan rates stable around reasonable levels.” Based on Yuan’s moves and the PBOC’s guidance over the past four weeks, reasonable levels appear to be levels below 6.7000. This level is likely to continue as key resistance as no sufficient changes have been seen from the Yuan’s major counterpart. The expanding yet lower-than-expected U.S. Non-Farm Payrolls read released on Friday failed to boost the odds of Fed rate hikes in September. We have discussed that without a clear outlook of Fed rate hikes, Dollar/Yuan rates will likely maintain within its current range and less likely to break the level of 6.7000.

Although the PBOC’s monetary policy is moderate in general, their next move may depend on key economic indicators. The soaring housing prices, mortgages, and real estate companies’ borrowing have elevated the risk of asset price bubbles.The July New Yuan Loans read shows that mortgages have become the sole driver to bank credit.The August prints to be released next week could give us some clues on the development of the housing sector. The PBOC as well as other financial regulators may respond accordingly to the figures as curbing price bubbles has been set as one primary target of the country.