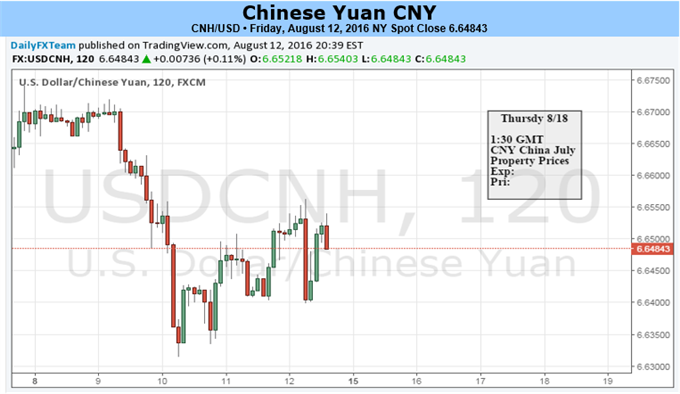 This Thursday marks the one-year anniversary of the PBOC de-pegging the Yuan from the US Dollar. The PBOC fixed the Yuan rate +0.41% stronger on the day and then guided it -0.43% lower and back to its earlier level on Friday. Over the past week, both onshore and offshore Yuan strengthened against USD: as of 10:30 EDT on Friday, the onshore Yuan (USD/CNY) climbed +0.32% to 6.6319 and the offshore rate (USD/CNH) rose +0.28% to 6.6458. The New Yuan Loans and monetary supply prints released on Friday further reduced the odds of the PBoC cutting rates in the near-term, which makes aggressive Yuan devaluation less likely in the near future. In the coming week, the Chinese economic calendar is relatively light; major event risk will likely come from trading counterparts, including the US July Consumer Price Index and the Minutes of FOMC meeting. Yuan rates could continue to test the level of 6.6500 as potential support, although the major resistance level of 6.7000 will likely remain in the focus of the PBOC.

Dollar/Yuan moves next week will eye any change in the outlook of Federal Reserve rate policy. Currently, the probability of Fed rate hikes in September and November are at extremely low levels with both at 18%. Recent U.S. data has sent mixed messages: Last Friday, the July Non-Farm Payrolls report indicated robust improvement in the labor market for the second consecutive month; and then just a week later, retail sales released this Friday came in well-below expectations. The July FOMC minutes to be published on August 17th could give additional clues on the Fed’s view of the U.S. economy and whether they might look to raise rates before the November presidential election. A changed tone from the Fed on rate hikes could bring elevated volatility to Dollar/Yuan pairs.

The PBOC’s monetary policy is on a much different track. The efficiency of China’s monetary policy has dropped to a new low and therefore, further easing measures will probably not help very much in the economy other than to exacerbate price bubbles. The July monetary supply report shows that the gap between the growth in M1 and M2 has widened to a new all-time high: The growth in M1 increased to 25.4% from 24.1% in the prior month while the growth in M2 dropped to 10.2% from 11.0%.As we discussed last week, a widened gap means that the problem of lacking investment opportunities becomes even worse. Also, new Yuan loans in July dropped more than expected: The print came out to be 463.6 billion Yuan and was 1.01 trillion Yuan less than the same month last year. New Yuan loans issued to corporates surprisingly dropped in July on an annualized basis, which was rarely seen in the past. Moreover, private investment in fixed assets continued to shrink in July: The growth in private investment has dropped to 2.1% from 2.8% in the prior month and is far below the 11.3% level from a year ago. These all add proof to the weakened conditions in the investment environment of Mainland China.

Also, the risk of housing price bubbles continues to increase. New medium- to long-term loans issued to real estate sector, most of which are mortgages, hit 477.3 billion Yuan in July. This is even larger than the net new Yuan Loans issued in the month. The new Yuan loans gauge is composed of new loans issued to real estate sector, new loans issued to non-financial sectors and new loans issued to non-bank financial sectors. One component, such as new medium- to long-term loans issued to real estate sector, can exceed the total new Yuan loans when some of the other components are negative. The July reads show that mortgages have become the sole driver to bank credit, which could fuel more gains to housing prices. Exact housing price to income comparisons around the world are tricky, but according to Numbeo, a comparison website,Shenzhen, Beijing, Shanghai and Guangzhou ranked among the top-10 global cities with the highest price-to-income ratio. Under such circumstances, the PBoC is unlikely to introduce additional easing measures as it would just make the condition even worse. Without an outlook of rate cuts on the horizon, the Yuan rate may avoid sudden and aggressive devaluation. More likely, the PBoC will guide the currency within a range before they agree on a break of the pivotal 6.7000-psychological level.