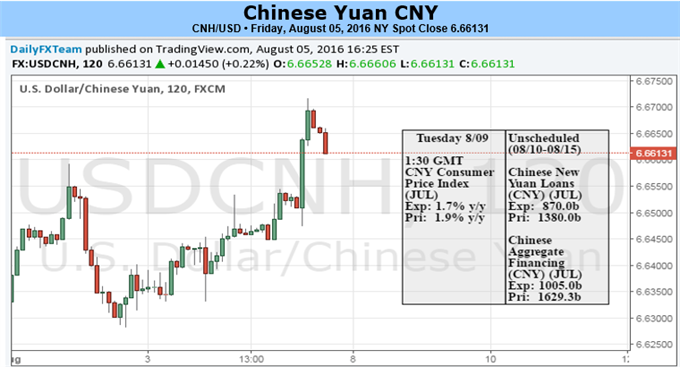 This week, both the onshore and offshore Yuan weakened against the US Dollar following the advances of the prior week. As of 10:30am EDT, the onshore Yuan (USD/CNY) dropped by -0.23% to 6.6520 while the offshore Yuan (USD/CNH) lost -0.65% to 6.66831. The better-than-expected July Non-Farm Payrolls read sent the US Dollar soaring on Friday, which largely contributed to the Yuan losses this week. In terms of the Yuan’s daily reference rate, PBOC guidance was on a roller-coaster ride this week: The changes in the fix from Monday to Friday was +234 pips, -174 pips, +256 pips, -249 pips and +38 pips respectively. Volatility in the Yuan’s fix is significantly elevated, but the range of the fix remains relatively tight. Looking forward, a heavy calendar of Chinese data could further increase the Yuan’s volatility, with key risks from foreign reserves, consumer price index, trade, new Yuan loans, monetary supply and industrial production prints for the month of July. In addition to market drivers, the PBOC is likely to continue to guide the Yuan within a range below the level of 6.70 with psycho-social importance.

The top two gauges for investors to watch next week are monetary supply and New Yuan Loans, which may affect the PBOC’s monetary policy. More specifically, traders will likely keep an eye on the gap between growth in M1 and M2, as this reveals how serious the problem that Chinese investors are currently facing: they are not short of money but lacking investment opportunities. A widening gap between M1 and M2 would indicate that the problem becomes increasingly severe. M1 is a measure for the most liquid portions of monetary supply: papers, coins, as well as checking accounts. M2 includes all elements in M1 and assets can be quickly converted into cash, such as savings deposits. In June, the growth of M2 was 11.8% while the growth of M1 soared to 24.6%.

A lack of investment opportunities both directly and indirectly impact the gap between the M1 and M2: A) As companies are short of opportunities to expand their businesses or make new investments, they endorse a wait-and-see approach and hold a huge amount of cash in checking accounts. B) Real estate, a traditional interest of Chinese households, becomes appealing once again in such environments. For Chinese individual investors, they don’t have many options except purchasing stocks and real estate. After the equity plunge last August and this January, many Chinese investors become cautious in stocks and have shifted their interest to real estate. Commercial banks are also more willing to issue mortgages to households rather than to lend to companies that are facing increasing credit risks in a slowing economy. China’s June New Yuan Loans report revealed that households’ medium- to long-term borrowing soared to 563.9 billion Yuan in June, an all-time high. Their cash eventually flowed into real estate companies’ checking accounts, exacerbating the gap between M1 and M2 growth. The July reads of monetary supply and New Yuan loans could tell investors whether this discrepancy is improving.

Right now the PBOC is less likely to introduce more easing plans, as it won’t help private sector to expand businesses and could cause more price bubbles. Four of the most powerful Chinese regulators including the PBOC have launched a series of tightened rules on China’s financial markets in the effort of curbing credit risks and asset bubbles. However, if investment conditions are improved, the PBOC may loosen controls on credit issuance. Such an outlook could bring considerable volatility to Yuan rates.

Consumer Price Index (CPI) is one of the most important gauges for China’s economy, as a low read may increase the odds of the PBOC adopting a more dovish monetary policy. Although China may be contending with an increasing risk of asset bubbles with China’s Central Bank less likely to cut benchmark rates or introduce aggressive easing measures, a weak CPI reading could open room for PBOC to make policy tweaks in the future when investment conditions improve. The CPI read for July is expected to drop to 1.8% according to Bloomberg, or even lower to 1.7% according to Chinese institutions; both distant from the target-level for CPI of 3.0%.