With the global market paying close attention, the Bank of Japan (BoJ) announced fresh additions to its expansive stimulus program. However, the effectiveness of these measures certainly comes with a heavy dose of skepticism. Market expectations heading into the meeting were set extremely high as fundamental speculation seemed to build into a frenzy of what the next step could be with global monetary policy pushing the envelope on measures that are notably failing to inspire the markets (drive target currencies lower, lift equities) and are generating far less growth than the scale of the programs would insinuate.

With the BoJ already pursuing an open ended QQE (Quantitative and Qualitative Easing) program and having this year turned rates negative (-0.10 percent), the exceptional and popularly unorthodox efforts engaged. This positioned the market to expect something equivalently dramatic from the jump to standard changes in benchmark rates to stimulus. They wouldn’t deliver.

The annual monetary base target was kept at ¥80 trillion. The negative rate was also kept at its current perch at -0.10 percent. Change started with the near doubling of ETF purchases to ¥6 trillion. Further, the central bank doubled its USD lending program to $24 billion in a bid to help Corporate Japan’s operations overseas. A new facility for lending Japanese government securities with no particular limit was also introduced.

These measures fall short on both an economic and financial front. From the economic perspective, the CPI figures reported earlier in the day showed that despite the collective efforts up until June, price pressures were still negative. Core forecasts from the BoJ for the 2016 fiscal year were set at a numbing 0.1 percent but for 2018 it was an optimistic 1.9 percent – close to the 2.0 percent target. The central bank further warned the risk to reaching the given objective was high. This has been the primary economic target for the central bank. GDP forecasts over the same period were projected at 1.0 percent in 2016 and 0.9 percent in 2018.

From a financial perspective, these efforts falter because they are set against unrealistic expectations. Exceptional currency depreciation and equity market advances in previous monetary policy iterations set an interpretation of ‘success’. While central banks are not supposed to target influence over the financial system, the BoJ has not made its interests on that front too difficult to direct. Furthermore, stability and economic spillover of such global measures does depend heavily on the market’s evaluation of influence. In today’s markets, the skew of what reflects productive easing has shifted aggressively. Rate cuts are overlooked (the RBA is a good example of this), ‘standard’ QE aimed at government bonds is underwhelming and even a neutral stance is treated as if it is hawkish.

Reflecting the focus this event had drawn in the hours leading up to its announcement, we witnessed extreme intraday moves even though there was no actionable news to act upon. Below is a one minute chart of USD/JPY. Amid a flurry of exceptional swings that took place in the span of less than a minute, there was a heavy 0.8 percent (88 pip) rally an hour before release and an astounding 1.6 percent (132 pip) drop in just a minute half an hour before. The actual announcement itself led to a 2.7 percent swing from initial surge to ultimate plunge – all in one minute. 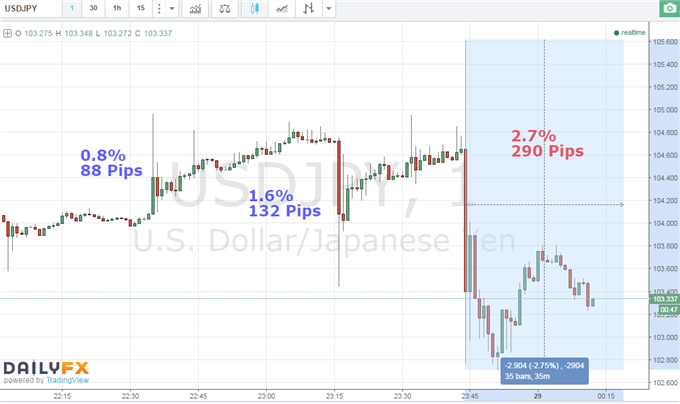 Looking at volume behind the USD/JPY, we can see the moves did generate turnover. This was unlikely to be productive trading as abruptness of the move offered little opportunity to get in and out. Such extraordinary conditions is a result of the thin liquidity between sessions and in anticipation of such a talked-about event. 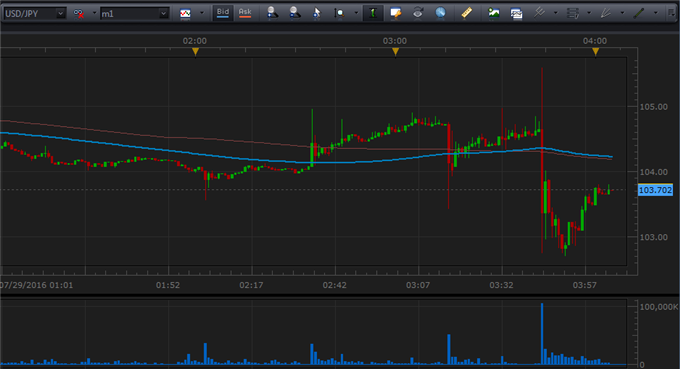 The exchange rate wasn’t the only victim to the intense market conditions. The one-minute Nikkei 225 chart below shows sharp moves that align to the timing of the USD/JPY jumps. The magnitude, however, was significantly larger. 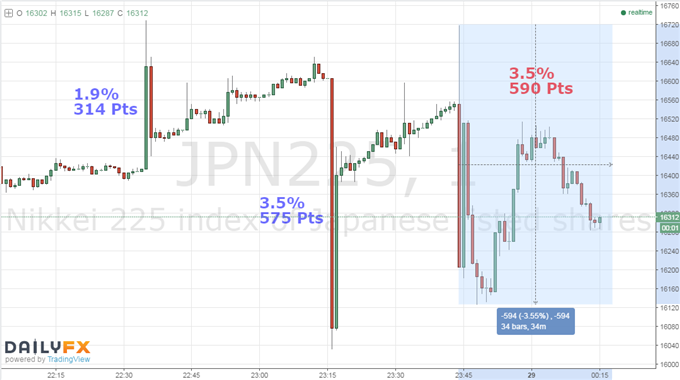 A New Regime or Too Little of the Same?

Moving forward, the question is what lasting influence these new measures will have on the sentiment of the market. If we recall the introduction of the negative rate back at the January 29th meeting, the initial reaction fueled a short-term USD/JPY and stock rally, only to tumble into deep bear trends. This notably does not come equipped with the initial jump – though that doesn’t suggest we are in for an even more dramatic plunge.

This program certainly does come up short, and the market will weigh how much the current level of the market reflects an appropriate discount to the presumptive effectiveness of the BoJ. As of the June lows, USD/JPY had dropped back below ‘parity’ (below 100) which was the midpoint of the QQE-epoch. There is likely more credibility to be lost on this front, but it is not the same low-hanging fruit as it was at the beginning of the year. BoJ Governor Kuroda ordered an evaluation of policy effectiveness for the next meeting which suggests this further escalations could come more quickly. 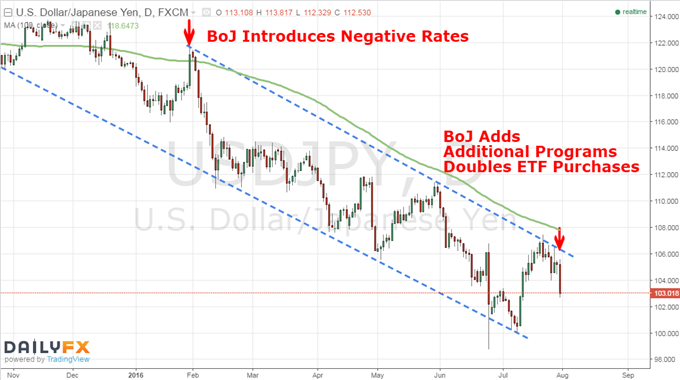 It is further important to recognize the BoJ’s influence over the global dependency on monetary policy as a brace for financial stability. The Japanese and Eurozone central banks have pushed the extremes of ‘normal’ accommodative measures, and the payoff has proven increasingly disappointing. This is not just an potential issue for these central banks trying to amplify growth and inflation – or even subtly attempting to devalue their currency – but it threatens the entire global order. The record high levels on benchmarks like the S&P 500 against a backdrop of record low baseline returns is a direct consequence of these programs. If confidence falters in their ability to fill the gap and lower volatility, there is considerable deleveraging that can result globally. 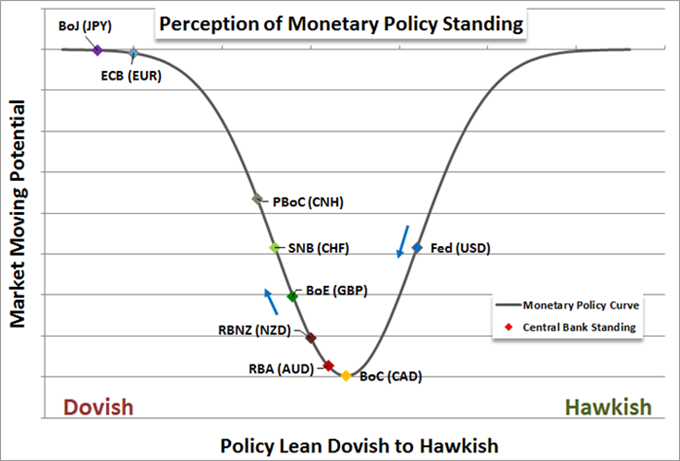