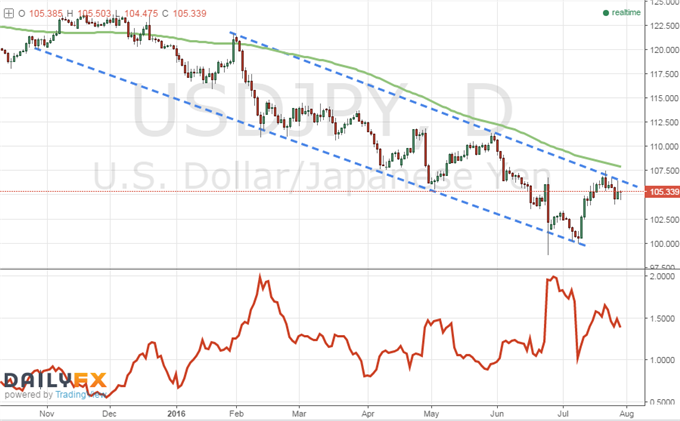 USD/JPY and the Yen crosses have certainly seen their fair share of volatility these past months, but price does little justice to the extreme anxiety behind the market heading into the BoJ decision. From the basic price chart of the world’s second most traded currency pair in the world, there is little sign of the storm that troubles the immediate horizon. The 10-day average true range (a simple measure of activity) is elevated but certainly not extreme. Nor is USD/JPY exhibiting characteristics of associated to extreme circumstances like sudden changes in direction or low-liquidity surges. However, the risk is certainly there.

The BoJ and Market Expectation

Friday morning brings a very hotly speculated over Bank of Japan (BoJ) monetary policy meeting. Typically, these central bank meetings pass with limited interest from the speculative ranks. Significant changes are infrequent and the lack of a specific release time makes for a further complication for the fundamentally-inclined. However, there have been remarkable meetings that have generated extreme market movement in anticipation and response to policy announcements. The April 2013 BoJ decision introduce the now ubiquitous QQE (Quantitative and Qualitative Easing) program. Build up into the announcement proved more productive in Yen depreciation. The late October 2014 surprised with an upgrade to that program and further currency tumble. The most recent effort triggered volatility, but not the type the BoJ wanted. On January 29th of this year, the introduction of negative rates led to a single day of USD/JPY advance before the pair reversed course and dropped over 2,250 pips (18 percent) through last month’s low.

What makes this upcoming meeting so remarkable is similar to what made the April 2013 event so extraordinary: expectations. The BoJ is expected to deliver additional accommodation, even though they didn’t lay out the kind of language in guidance that had previously leveraged speculative certainty so high. Outside forces have lent more pressure. While the central bank has lamented its shortfall in reaching targets (inflation, stable growth), we have seen the market take up the call for a must-respond view.

The government has added to this pressure with the Upper House election results on July 10 emboldening Prime Minister Abe to promise a new fiscal stimulus to be detailed and voted on in early August. As with the original adoption of ‘Abenomics’, many assumed the ‘Three Arrows’ would find a monetary policy effort to complement the fiscal one – and so too does it seem the government. An expedited confirmation of general fiscal program size earlier this week (¥28 trillion) seemed an effort to reinforce the legitimacy of BoJ action and an attempt to shore up its impact – to try and prevent the market skepticism that followed the introduction of negative rates or the ECB’s stimulus upgrades in March and December that actually saw the Euro advance and capital markets drop. Just before the Tokyo session, it was reported that there was a prepared statement from the Ministry of Finance vowing to do whatever was necessary to enforce effective measures ‘should’ the BoJ act.

From the market’s perspective, action seems essentially certain. We can see this in the overnight implied (expected) volatility readings for USD/JPY. It has hit the highest levels since the worst of the liquidity crunch during the Great Financial Crisis. Now, even to do nothing would incite an extreme response from an expectant market. 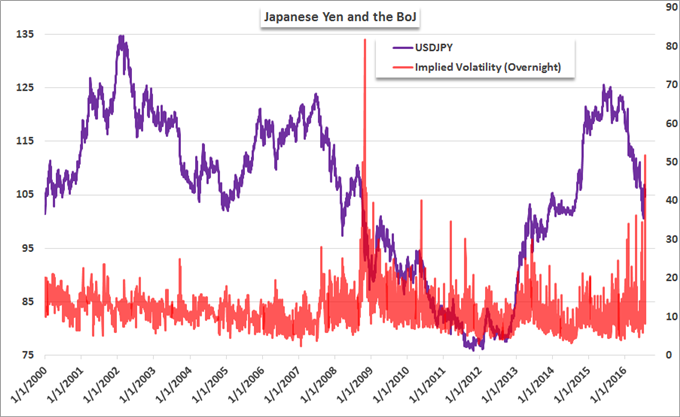 Owing some context to expectations and realized volatility, below we see the difference between implied and actual. This contrast shows to some extent the tempo at which a swell in volatility would pick up at. In this measure, we see current conditions surpass the GFC, insinuating there will be a more abrupt change in the activity level of the market. Generally, that is dangerous for liquidity and traders on the onset, but it can also indicate extended reaction after the event. 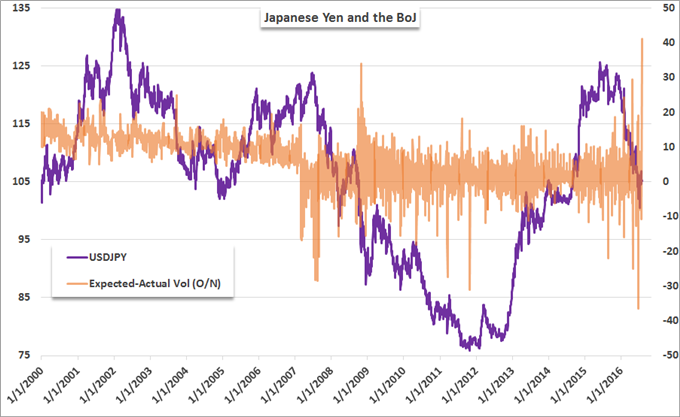 It is worth giving some context to the anticipation in this event, and what better than the recent Brexit vote that drove GBP/USD to its single largest daily decline on record on the way down to a three decade low. Where the implied volatility reading for the cable on June 23rd before the votes were being tabulated was just above 70, USD/JPY’s current standing is approximately 53. That is comparably extreme. 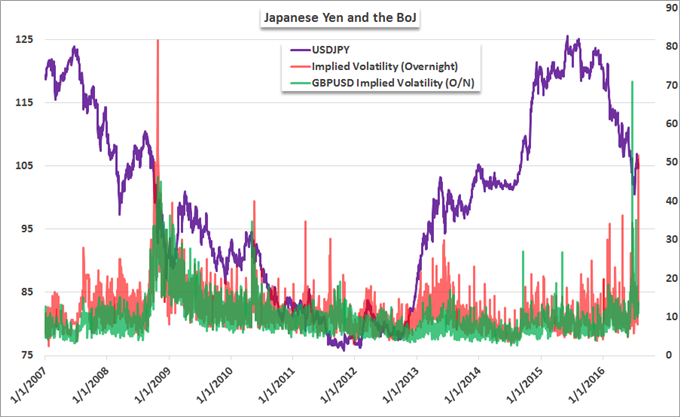 We can also look to implied volatility measures of longer duration to see what happens beyond just the flash-in-a-pan response to the outcome. Below is the 1-week, 1-month and 3-month activity level measures. The first of that series has hit a seven-and-half year high. The other two are not as extreme, but they are near their highest levels since the GFC, during periods when USD/JPY was driving aggressive trends and suffering sharp reversals. 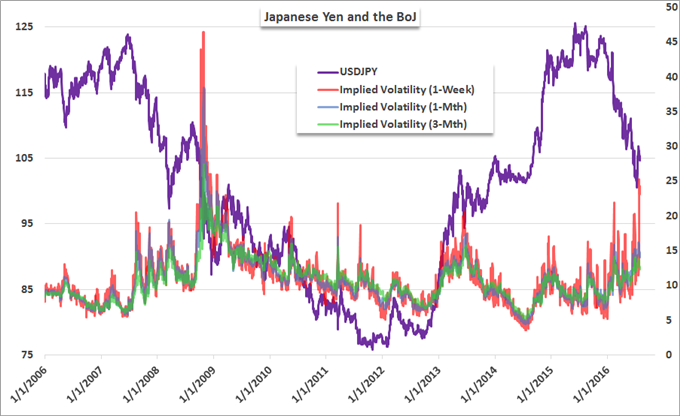 A Global Event that Distorts Monetary Policy and Sentiment

While this may be an event that seems limited to the Japanese Yen pairs, it should be considered a global event. The reason is that the Bank of Japan is one of the most accommodative major central banks in the world. It defines the ‘dovish’ extreme alongside the ECB. That title makes it a lightning rod for rising skepticism in global sentiment. In the past year, the push to more extreme accommodation has been met by muted and - more troublingly - contradictory market reactions. The economic benefits of additional efforts has not born scalable fruit either…yet. Not only does this represent a loss of credibility for the bank that pursues the effort, but it more significantly undermines the capability of future efforts of any group. That could be very problematic in the event that the financial system facing an unfolding crisis rather than acting preemptively. 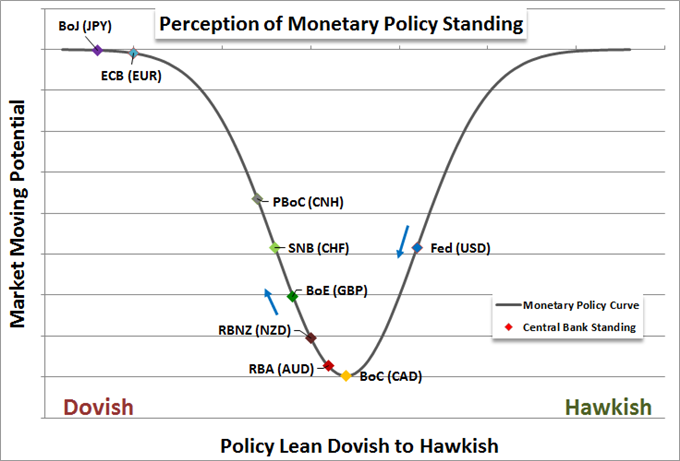 With the increasingly aggressive programs that are being enacted, the markets have grown increasingly anesthetized to additional efforts. After years of quantitative easing that is targeted at government bonds, this avenue of support seems provincial and ineffective – even though the programs are extremely large and do effectively low yield. This is likely a reflection on the break in effectiveness for these efforts – lower rates does not readily translate into an equivalent boom lending and GDP. Increasingly, the vote of confidence for programs is placed on the initial market response. And, that means greater and more experimental efforts are needed to ‘surprise’ the jaded. Given the expectation and the global uniformity of easing, a neutral standing can actually be construed as somewhat ‘hawkish’. A rate hike would be treated as exceptionally hawkish. And, perhaps the fringes of policy like ‘helicopter money’ are reserved for even modest currency depreciation and equity market lift.