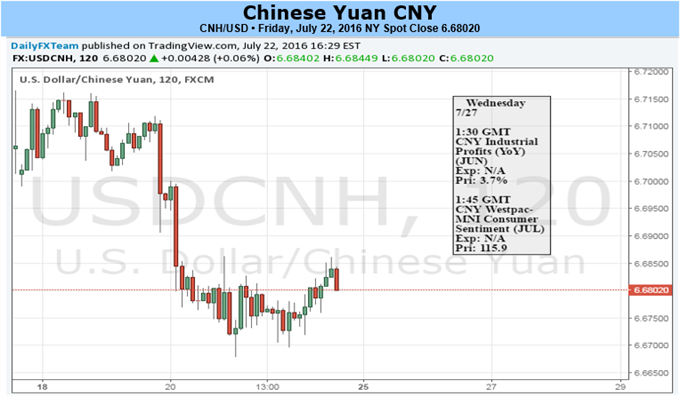 Both the onshore and offshore Yuan rates failed to hold above the key resistance level 6.70, falling below the 6.6800-handle this week. On Tuesday, the spread between the two rates widened to 142 pips after the PBOC guided the USD/CNY stronger-than-expected. Over the following three days, the PBOC continued to strengthen the Yuan fix by +302 pips or +0.45%, to 6.6669 on Friday. The spread between the onshore and offshore Yuan rates narrowed following the guidance to 18 pips on Friday. Next week, event risk that may directly affect Dollar/Yuan pairs include the FOMC rate decision, the US 2Q GDP print and G-20 meetings. The Bank of Japan’s rate decision, UK and Euro-zone 2Q GDP reads will likely bring considerable volatility to the Yuan Index and thus indirectly affect Dollar/Yuan pairs. In addition to market moves, the PBOC’s guidance will likely continue to weigh the Yuan. The Central Bank is likely to hold the Chinese currency within a range in the coming week.

Major central banks’ monetary policy adds uncertainties to the FX market. Their decisions next week may either move Dollar/Yuan pairs directly; or drive the Yuan Index composed of multiple cross-pairs and, in-turn, the Dollar/Yuan as the PBOC may want to even-out changes in the Yuan Index. The odds of a Fed rate hike in July is very low, only 8% according to Fed Funds Futures a week ahead of the decision; but the outlook of Fed’s monetary policy over the following periods may bring elevated volatility to Dollar/Yuan pairs. Also, the US will release the second quarter GDP on Friday, just two days after the FOMC decision. The IMF July World Economic Outlook report said that despite the US weakness in the first quarter, leading indicators have signaled a pick up in the second quarter. A stronger-than-expected GDP read or a more hawkish tone from Fed could send the US Dollar higher and in-turn, drag down Yuan rates.

However, a strengthened Dollar may not move Yuan rates as aggressively as what was seen upon the release of FOMC meeting minutes in April, sparking increased expectations of a near-term rate hike. At the time,the PBOC allowed the fix to move in accordance with the Fed’s impact: The offshore Yuan lost 263 pips against the US Dollar following the release of April minutes and the daily fix was revised down by 315 pips. The Yuan’s moves in the past week signals that the Dollar/Yuan is not ready to break above 6.70, at least from the Central Bank’s point of view. With a stronger-than-expected daily fix on Tuesday, the onshore USD/CNY pulled back below 6.70 and then the offshore USD/CNH dropped the next day. In the following days, the PBOC continued to guide the Yuan stronger against the US Dollar while the Dollar extended rallies against other major currencies: as of 1:20pm EDT on Friday, the Dollar Index (USDOLLAR) has gained +0.72% this week. Thus, even if the US Dollar continues to strengthen on the 2Q GDP print or a more hawkish monetary policy, the Dollar/Yuan rates may return to levels below 6.7 but not necessarily break the key level under the close watch of the PBOC.

This may partially result from regulator’s intention of stabilizing the Yuan ahead of G-20 meetings to be held in China on July 23rd and 24th. More importantly, slowing the pace of Yuan depreciation will help to stabilize China’s financial markets and avoid chaos. Besides the likely upper band for Dollar/Yuan pairs, the Central Bank’s exchange rate target may also place a floor for the pairs. In order to maintain the Yuan’s stability against a basket of currencies, the USD/CNY pair will need to offset moves in other Yuan pairs in the currency basket. For instance, if Bank of Japan cuts rates or introduces easing measures next week, it is likely to send CNY/JPY higher. And this will put pressure on the USD/CNY pair to even out gains from the CNY/JPY. Thus, Dollar/Yuan moves in the next week will likely remain within a range.

How Technical Levels Will Develop In Q2 of 2022