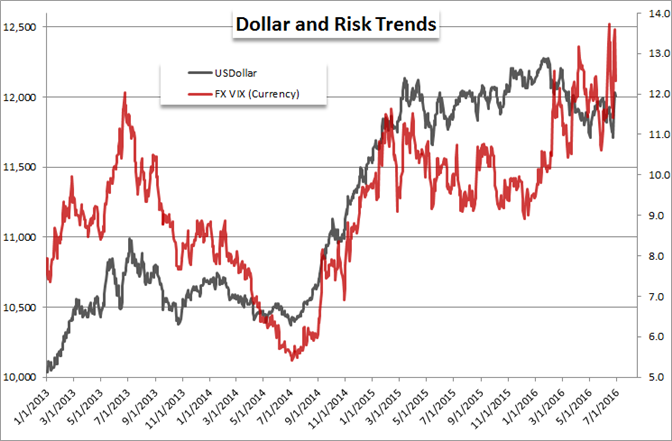 US Dollar Reserve Status to Flex Its Muscle?

The Dollar Index stuck to its relatively benign 5.8 percent range just below 13-year highs for the fifth consecutive quarter. The fundamental motivation behind the Greenback’s remarkable climb over the preceding five years has clearly lost traction. Focus is no longer on the diverging monetary policy tracks of the world’s largest economies and the minimal yield that focus presents. Instead, the emphasis is shifting towards the other end of that investment scale: the ‘risk’ bearing. As blind reach for increasingly marginal returns evaporates, traders are more mindful of their exposure and taking note of where the exits are should a financial fire break out. Should we see another bout of extreme risk aversion, the Dollar will likely receive a structural boost. However, if we remain in the more moderate phases of risk aversion, the currency may very well suffer as its ill-won ‘carry’ premium bleeds off.

In the Event of a Fire

Through the opening quarter of 2015, the US Dollar enjoyed an exceptional advance due in large part to its position at the top of the global interest rate curve. In other words, its unusual pursuit of normalizing monetary policy (warning of and later pursuing rate hikes) fed the extreme appetites of global speculators. However, coveting the negligible returns of slow rates hikes from the zero bound is first and foremost predicated on an express focus on return and disregard for the risks that accompany those yields. So, on the one hand, rate expectations for the Fed will retreat in the wake of slowing growth, Brexit volatility, and regular Chinese tremors. On the other, the Greenback will find its safe haven status revived.

When the world’s financial markets suffer a universal withdrawal from risk, there are few markets that stand to benefit unquestioningly. The Dollar is one of those extreme havens. In a wave of global risk aversion, there is no effort to find an ideal mix of stability and return. Stability and liquidity are the only concern. There are few markets that are even in the same orbit for safety as the US currency and Treasuries. And there is little time or will to debate this avenue to safety when panic strikes. In the graph below, the correlation between the USDollar and FX Volatility Index (made of an equally-weighted index of medium-term implied volatility for EURUSD, GBPUSD, USDJPY and AUDUSD) is apparent – though past performance is not indicative of future results. Arguably this period does not reflect an extreme aversion to risk and is disproportionally a greater concentration in the currency market. An escalation in the sense of uncertainty for the entire financial system would only leverage the Dollar’s appeal.

Should the world finally relent in its chase for increasingly marginal returns and/or admit the risk their exposure represents, the resultant deleveraging would be significant. While certain markets have already seen a substantial retreat from their post-GFC surges (emerging market, high-yield, even carry trade), there is still extensive and exceptional exposure globally. A further leverage for the Dollar in a ‘flight to quality’ results from the Brexit. The UK’s decision via the EU referendum to split with the European Union has led to troubling growth forecasts for the UK and calls into question the long-term stability of the latter. That represents a serious weakening of the world’s second (Euro) and third (Pound) largest reserve currencies. The primary benefactor from that shift is the world’s largest – the Dollar. 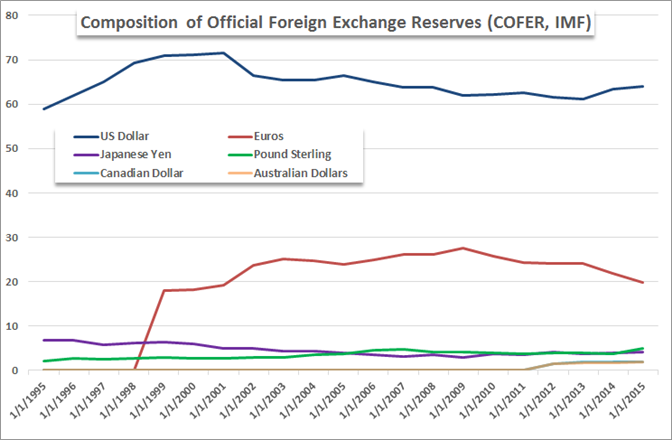 Does Monetary Policy Matter? Yes, but It Is Unlikely to Benefit the Dollar

In the event of a global move away from risk, the Dollar stands to benefit. At the other end of the spectrum; a rebound in growth and the stabilization of international fears (China and Brexit fallout), would likely benefit the USD as well. In such a scenario, the favorable monetary policy skew from the Fed would be supported. However, such an ideal scenario is unlikely. A situation where sentiment remains on guard but does not devolve into outright alarm would likely see the Dollar lose traction.

The Dollar at the close of the second quarter was close to its decade-plus highs, won on the back of its interest rate prowess. A moderate level of realized risk paired with serious uncertainty about the future would see a more uniform deflation of sentiment where havens are treated as more equivalent peers. In such a situation, government bonds from most of the world’s largest economies (US, Eurozone, UK, Japan, etc) will attract safety appetite. Furthermore, for the Euro and the Yen’s part; the rise of skepticism over the efficacy of ECB and BoJ stimulus programs will curb the currencies’ devaluation in the face of further push into negative territory for rates or introduction of new QE. That said, the Dollar has tangible premium to lose in the hold out speculation of rate hikes. As of the June FOMC meeting forecast, the group still believes it will hike twice in 2016. The market, via Fed Fund futures, sees no chance of two standard hikes and is incredibly dubious (9 percent probability) of even one by December. As the weeks pass without progress towards a higher benchmark rate the Dollar will slip as its appeal dims. 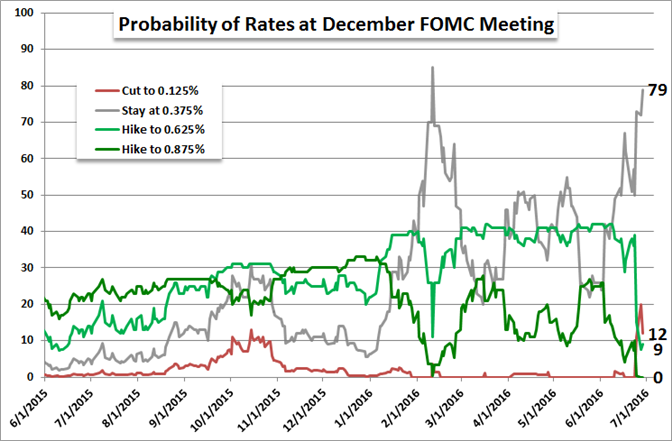 The Q2 forecast noted that “weakness below the median line would probably trigger sharp weakness until the May low before the next rally attempt…In short, there are signs that the rally is weakening but not d it is over.” Q2 developments suggest that the USDOLLAR rally from 2011 is complete and that the index may be on the verge of significant depreciation. First, the rally from the 2011 low consists of 2 equal legs in geometric terms. Each bull leg (August 2011 to July 2013 and October 2013 to January 2016) covers just over 18%. The impulsive decline from the equality measurement indicates a significant behavior change; the trend is lower.

A fixed length cycle is also worth mentioning. The 2011, September 2012, October 2013, and January 2016 turns relate by a 58 week cycle. The fact that the top relates to the cycle increases confidence that the January high was important. The next cycle date is not until February 2017 but the midpoint of this cycle (29 weeks) has also identified a number of turns and next registers the week that ends August 5th. An interim low could form if the index is declining into that week, especially if near the 2011-2014 trendline (about 11100).

Near term, ‘Brexit’ has resulted in a rally to resistance that is defined by former channel resistance turned support (May 2015). A turn down from this well-defined slope line would warrant bearish trading operations. Strength above 12131 (year open) would at least delay and possibly negate a bearish outlook.