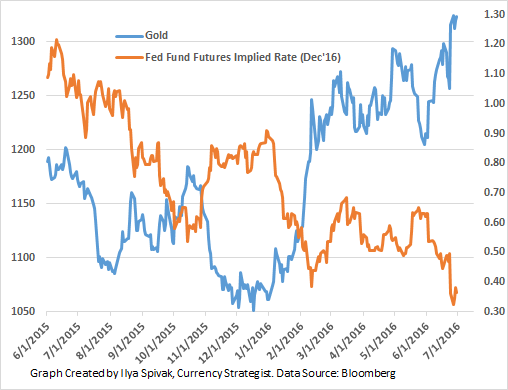 Gold Enters 3Q at 2-Year High. Will the Rally Continue?

Having trouble trading Gold? This may be why.

Gold continued to rise in the second quarter, with prices hovering near a two-year high ahead of the midyear mark. The markets’ skepticism about the prospects for further rate hikes from the Federal Reserve appears to account for the metals gains. This encouraged the appeal of alternative stores of value against fiat assets and reduced the cost of owning them relative to yield-bearing alternatives.

US economic news-flow disappointed relative to consensus forecasts through mid-May, suggesting the central bank would not be able to justify tightening. A pickup in activity thereafter appeared to mark something of a reversal and encouraged a hawkish turn in policymakers’ rhetoric, but May’s unexpectedly dismal US payrolls data and the shocking outcome of the UK “Brexit” referendum erased hopes for even one 25bps rate increase.

At surface level, more of the same seems likely ahead. The Fed has been reluctant to raise rates during episodes of turmoil in the financial markets even if US economic news-flow appeared relatively well-anchored. It seems reasonable to suspect they will continue to stay their hand as markets remain jittery after the UK’s decision to leave the European Union.

First, it seems like investors will have to wait for at least several months before a new Prime Minister steps in to lead negotiations on the terms of the EU/UK rupture. This bodes ill for global growth as lingering uncertainty cools economic activity, encouraging risk aversion. Second, capital outflows from the Pound and other currencies in the line of fire – notably, the Euro – will probably boost the US Dollar and cool inflation.

The latter point presents a complication. Gold is priced in terms of the greenback on global markets. If it continues to strengthen as haven-seekers flock to the relative security of US Treasury bonds and abandon Brexit-linked reserve currencies, the yellow metal may face de-facto selling pressure. Priced-in Fed rate hike bets already discount further tightening in 2016, which could help set the stage for such a scenario.

This makes for a clouded outlook in the months ahead. The “Brexit” drama has compounded an already challenging landscape fraught with conflicting forces pulling gold in opposite directions. Three-month volatility bets implied in options have surged to snap a two-month losing streak however, seemingly making the likelihood of sharp price swings the only truly confident bet to be made. 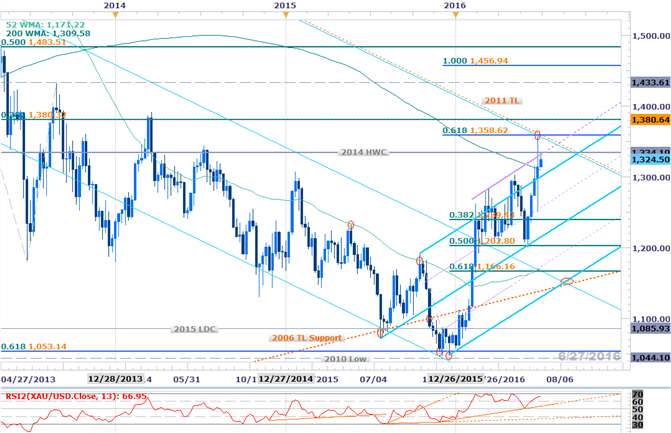 Gold continues to trade within the confines of a well-defined ascending median-line formation dating back to the 2015 lows with a sliding parallel extending off the early-February high continuing to cap the rally for now. Back in March we noted that, “since the late-2011 record high, gold prices have tended to make the yearly high in price within the first quarter and a breach of the 2016 high over the next few months would offer further conviction on a broader turn higher in bullion.”

Indeed gold pushed into new highs with the UK Referendum spurring a flight to quality which took bullion into confluence resistance at 1358. This level is defined by the key 61.8% extension of the advance off the 2015 low and converges on basic trendline resistance extending off the all-time 2011 high heading into the start of the third quarter. The rally marked the largest weekly trading range since February with ongoing weekly divergence into these highs leaving the immediate topside bias vulnerable heading into the open of July trade.

That said, look for initial support at the 52-week moving average (currently ~1309) backed by 1239/44 & the median-line extending off the July 2015 low. From a trading standpoint we would be looking for a low near these levels if in fact the yellow metal is still on pace for a move higher. A breach above the 38.2% retracement of the 2011 decline at 1380 is needed to validate a break-out of the long-running formation off the highs with such a scenario targeting resistance objectives at 1433, the 100% extension at 1456 & the 50% retracement at 1483. A break below 1202 invalidates the long-bias with a move below confluence support at 1166/71 needed to put the bears back in control. We’ll take a more neutral stance heading into July with a general topside bias in play while above 1200.