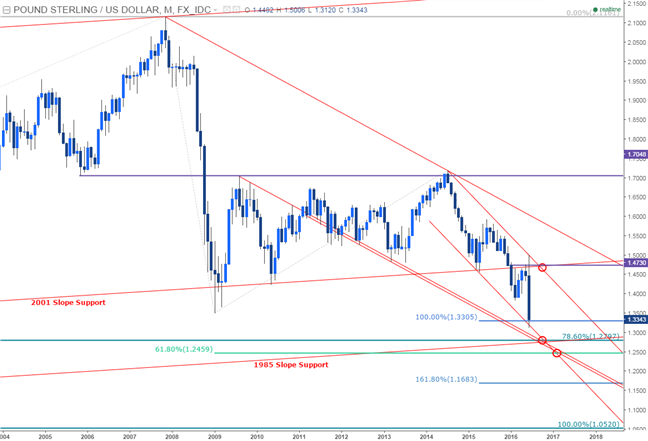 Brexit is a Game Changer, but Timeline (or lack thereof) the Issue

Having trouble trading the Pound? This may be why.

Coming into the second quarter of 2016, there was one major item on the calendar for the United Kingdom, and that was the Brexit referendum to be held a week before the end of Q2. After spending much of the quarter seeing the British Pound track volatile polling results, moving lower as polls indicated a majority voting for ‘leave’ or higher for polls indicating a majority for ‘remain,’ the final week before the referendum saw Sterling climb as markets began to price in the expectation for a remain vote.

A remain vote seemed likely from numerous angles. Bank of England Governor Mark Carney had previously warned of the repercussions of what a vote to leave might entail, saying that should British voters elect to leave the EU, the U.K. economy would be vulnerable to higher unemployment, slower growth, higher inflation and a ‘sharp repricing’ in the value of the British Pound. This is a tough spot for a Central Bank because they then have to decide whether to mold rate policy to either a) dampen inflation, while risking even deeper unemployment and even slower growth or b) boost growth, which could expose the economy to even greater levels of inflationary pressure and an even deeper drop in the British Pound. This could become like a death spiral for a Central Bank, because molding policy in one direction, such as cutting rates to boost growth and employment, could worsen the other set of risks with increasing inflation and a weaker British Pound. And if the bank were to then address increasing inflation and a weaker British Pound by hiking rates, this may offset or completely nullify the benefits of the initial action. There are no easy answers forward for the Bank of England in such a scenario.

The Bank of England saw the probability of a Brexit as such a distant possibility that they practically assumed a ‘remain’ vote in their most recent inflation projections. At the last Super Thursday announcement, the BoE had estimated that approximately half of the 9% decline in the British Pound (at the time) was related to Brexit risks ahead of the vote. When calculating inflation projections, the BoE assumed that the Sterling was more valuable than what it was actually trading around at the time in the effort of normalizing their assumptions.

Even as we came into the Brexit referendum, the U.K. economy didn’t have the appearance of being in a strong-growth mode. GDP growth had decreased to .4% in the first Quarter of 2016 from the previous read of .6% in Q4 of 2015, and inflation had fallen back down to .3% in April and May after running at .5% in March. A month ahead of the referendum, multiple members of the Monetary Policy Committee of the Bank of England openly voiced concerns as to whether or not this slowdown in data was related to the upcoming Brexit vote, or if this was a part of a larger slowdown being seen in the United Kingdom that may actually require a rate cut after any ‘Brexit bounce’ in the event of a remain vote.

But when British voters elected to leave the European Union, all of this went out of the window. Making matters more pensive is the fact voters have elected to completely overturn the status quo of 40+ years of European membership despite the fact that the U.K. isn’t currently facing an existential crisis. If there were an impending financial collapse (or a very recent one) or a war, such a vote could be more logical as an electorate seeks out answers to major societal issues; but that wasn’t the case here, and this only adds to the uncertainty in the near-term future of the U.K.

As the news that British voters had elected to leave was permeating through markets, we saw another development that may further delay negotiations around actually executing a British exit from the European Union: Prime Minister David Cameron announced his resignation in order for ‘fresh leadership’ to guide the U.K. through this new phase. Most signs point to the Conservative Party leadership election to be held in September to find Mr. Cameron’s successor, and we likely won’t hear of the U.K. formally beginning exit discussions until then.

So, we may not even hear of discussions being started until at least next quarter; and after that, the process of actually de-tangling the U.K. from Europe may take as long as an additional year and nine months, as Article 50 of the Lisbon Treaty specifies a two-year time frame for exit discussions. Even then, those discussions could be extended with agreement by both parties, so that timeline could become even more extended.

This is the type of uncertainty that capital markets generally abhor and avoid when at all possible. Even the questions (how will the U.K. actually leave) have questions (when will they even begin discussion). What is probabilistic is that we likely won’t be seeing a rate hike out of the United Kingdom anytime soon as we move nearer to Brexit discussions, and the Bank of England may even look at a somewhat proactive rate cut in order to offset the anticipated slowdown that may come to markets before the details of Brexit are decided upon.

For the quarter ahead, the fundamental forecast for the British Pound will be set to bearish. One key note, the dramatic drop in Sterling spot rates around Brexit was on extremely low volume, which we will elaborate on in the technical section of this forecast; so be very careful of chasing in the wake of a ‘game-changing’ type of event. Instead, let resistance show on shorter-term charts before looking to trigger in to the ‘bigger picture’ down-trend.

From a technical standpoint, cable is trading within the confines of a well-defined descending channel formation extending off the 2014 high. The Brexit vote charged a rally into slope resistance before reversing sharply into confluence support around the 1.33-handle where the 100% extension of the 2014 decline converges on channel support. Heading into third quarter, the pair remains at risk for further losses while below key confluence resistance at 1.4730- this level is defined by the 2016 open and converges on channel resistance and former slope-support (now resistance) extending off the 2001 lows. 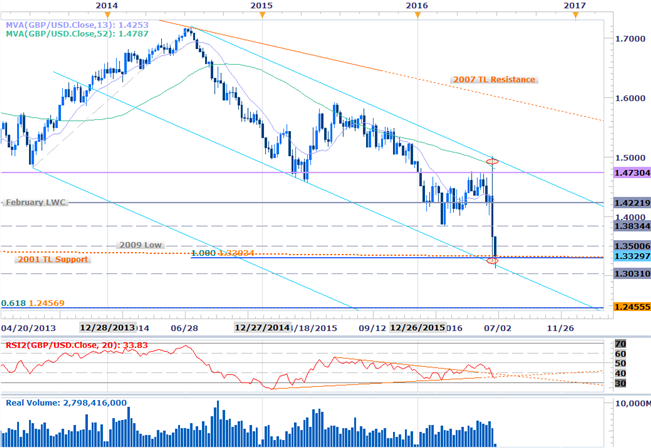 In percentage terms, the UK referendum marked the largest weekly range since May of 2010 and despite the volatility, the Brexit decline saw the lowest volume in 5-weeks, offering little confidence on the move at this point. With that said, the pair is now testing a near-term support zone and while we could see some recovery here, the broader focus remains weighted to the downside heading into July trade. Interim resistance stands at the 2009 lows at 1.35 backed by the 2016 opening-range low at 1.3834 with our bearish invalidation level set to the February low-day close at 1.4222. A breach back above the 2016 open at 1.4730 would be needed to shift the broader focus back to the long-side for the pound.

Bottom line: we’ll be looking for a low heading into the third quarter with a break below interim support at the 1.33-handle targeting the 78.6% retracement of the 1985 rally at 1.2797 backed closely by the 61.8% retracement of the decline off the 2007 high at 1.2459- Both of these levels converge on slope support and represent areas of interest for possible exhaustion / long-entries heading into the second half of the year. A break below this critical support zone would be needed to keep the short-bias in play targeting subsequent objectives at the 1.618% extension at 1.1683.